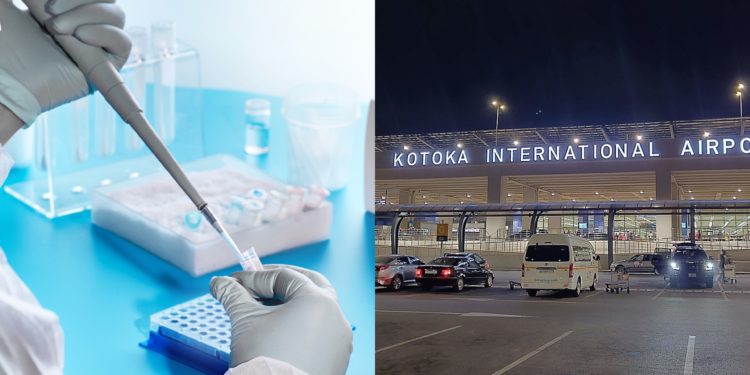 Our checks reveals that, The lead company undertaking the Covid test at the arrival of Terminal two known as LIENDEG COMPANY is never registered with the registrar General’s department of Ghana.

In simply term, the Liendeg Company company which charges around 250 cedis per test is a Ghost company with no document showing they are indeed a genuine registered company in Ghana yet it’s undertaking the mega test deal at the Airport.

As to how they won the bid to undertake the test at Ghana’s international airport terminal 2 when they are not a registered company in the country is a mystery.

What this means is that, the Liendeg Company are of course not paying any taxes to Ghana with the monies they are taking and there will be no traces of they being held accountable to account for how much they make from the test in the name of Ghana.

This is coming at a time the health Minister Kwaku Agyemang Manu himself has been caught pant down while using the pandemic to enrich himself and his cartels at the expense of the tax payer.

The health Minister was said to have used middlemen in buying the Sputnik Vaccines at inflated cost something he denied from the beginning only to later admits he wasn’t thinking straight at the time he was engaging in the deal.

An adhoc committee set up by parliament to probe the minister.

The ad hoc committee set up by Parliament to probe the procurement of Sputnik vaccines, has revealed that the Health Minister paid 50% of the contract sum to Messrs Al Maktoum before appearing before them to answer questions.

The committee has discovered that the government had paid $2,850,000 of $5,700,000 in the controversial Sputnik vaccine deal but denied knowledge of any payment when he testified under oath before the ad hoc Committee.

The deal with Sheikh Al Maktoum was meant to purchase 3.4 million doses of the vaccine but Mr. Agyeman-Manu told the parliamentary committee that “to the best of my knowledge, we haven’t done any payment, although the Sheikh had supplied the country an initial 15,000 doses of Sputnik V vaccines, on Wednesday, March 3.

His explanation for entering into such an international agreement without parliamentary and cabinet approval despite the Attorney-General’s prior warning was that he was desperate to save Ghanaians from the covid-19 pandemic.

“I was in a desperate and helpless situation with the management of the Covid numbers. In February [this year], we had 78 deaths; by March, we had 56 deaths, and these were the numbers that pushed me to act.

“…if you were the Health Minister, I think you might have taken certain decisions that in hindsight you may not have done those things. The country was not in normal times,” Mr. Agyeman-Manu told the committee.

“The point must also be made that, even if it was an emergency, the Minister should have found time to communicate effectively and engage with the Committee on Health. The extensive engagement would have saved the Ministry from the negative reactions from the citizenry and some Members of Parliament,” the committee said.