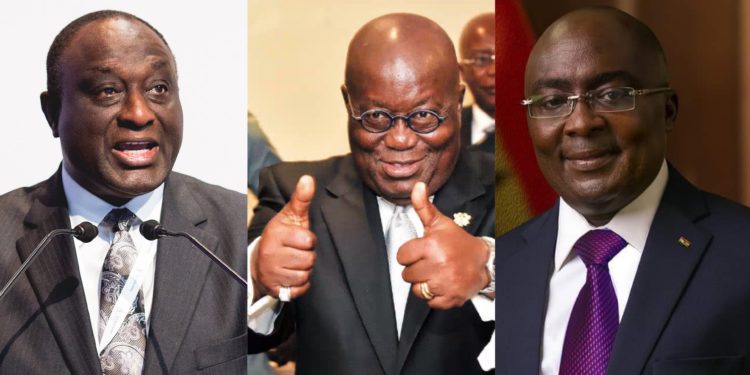 126
SHARES
701
VIEWS
Share on FacebookShare on TwitterShare on WhatsApp

Speaking on With All Due Respect on Loud Silence Tv, the investigative journalist revealed the President going round with a so called regional tour is geared toward one thing; which is by subtly campaigning for his vice Bawumia to be voted as the Flag bearer of the Npp when he exit the stage.

President Akufo Addo is thus targeting Opinion leaders, breaking the bank and dashing cash and other goodies to some selected traditional leaders all in attempt to sell his vice as the best successor of his to them at the expense of Alan Cash.

The NPP earlier has served notice that nobody should campaign until the time is due and whenever will flaunt the directive will severely be punished but that is never the case with the President.

A look at the speeches of the President when he meet chiefs and opinion leaders in his regional tour shows he is asking for continuity with his Vice President Dr Bawumia.

The NPP in 2023, will go to the polls to elect a new flag bearer of the Party to lead them into the 2024 elections.

Even though other persons have all show interest that if the road is cleared they would contest, everything is pointing to the race being between The Vice President Dr Bawumia and Trade and industry minister Alan Kwadwo Kyeremanten.

Mr Kyeremanten contested with Akufo Addo in 2007 and 2012 respectively but in all of them Nana Addo won.

The Nana Addo faction of the Npp is thus doing everything possible to have Bawumia as its leader in 2023.

A close look at the appointment of Akufo Addo in his second term shows a pattern of him only appointing Bawumia loyalist and persons they can convince to throw their support for Bawumia when the need arises.

This is the actual reason behind the appointment of MCEs and DCEs after over 6 months since the government was sworn in.

The race promises to be a hot one but elimination by rough tactics is currently in play by Mafia Akufo Addo to have his poodle Bawumia lead the party so his Akyem clique can continue to have control of the party and government.