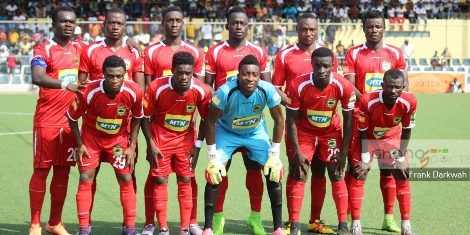 Asante Kotoko are embarking on a massive fundraising drive among their supporters to pay a $240,000 FIFA fine by next month to avoid being relegated from the Ghana top-flight.

The Porcupine Warriors have approached their supporters with begging bowls, called ‘lalasulala’ in local parlance, to beg for money to pay for the hefty fine following breaches in the illegal signing of striker Emmanuel Clottey from Esperance.

The two-time African champions were handed the fine for signing the attacker when he was fully registered with the Tunisian gaints which has prompted the frantic search for money.

With the 10 May deadline for paying the fine looming, a leading member of the club Nana Kwame Dankwah is pleading with fans of the Kumasi-based club to help out.

“Yes, we have received the FIFA notice, and we have to act on it,” management member of Asante Kotoko, Nana Kwame Dankwah, told Asempa FM.

“I believe that as a Kotoko family which entails management and the supporters, we need to make sure that we support our leader Kwame Kyei, so that we can find a solution to this problem.

“Let’s come together so that we find solutions on how are we going to pay this money.”

Dankwah wants fans of the club to emulate their gesture when they were fined €99,000 by FIFA for wrongful dismissal of one of their former coaches Dieter Scmidt.

“Its happened before, during Herbert Mensah’s time when Kotoko wrongfully dismissed Hans Dieter Schmidt, we were slapped with a huge fine,” he said.

“Dr Sarpong was able to do an appeal for funds to raise money which was eventually topped up by management to clear the debt.

“So I will urge all of us to come together to help clear this current debt.

Despite current management coming under strong criticism for the way they have handled matters since taking over from the Opoku Nti, Dankwah wants the focus to be on paying the FIFA fine before the deadline insisting lessons have been learnt.

“There are issues but I feel its not necessary at this point. Now is not the time to do interrogations and blame games,” the management member said.

“Lets focus on clearing the debt first. And when all is sorted we will learn the valuable lessons and avoid similar happenings in the future.”