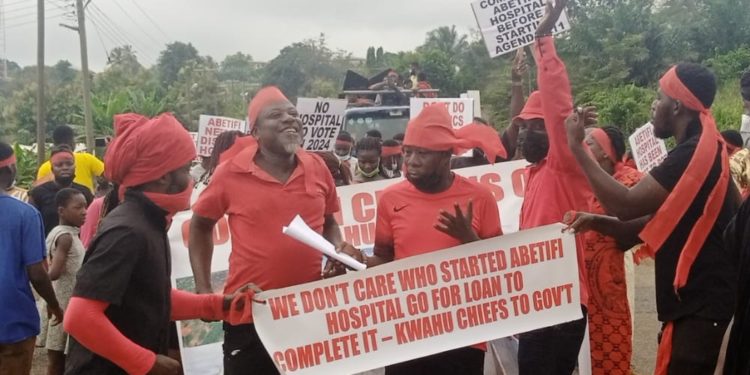 25
SHARES
140
VIEWS
Share on FacebookShare on TwitterShare on WhatsApp

A group calling itself concerned Citizens of Kwahu East District in the Eastern Region on Tuesday, September 21, 2021, demonstrated at Abetifi, the district capital to register their displeasure over abandoned ultra-modern hospital project initiated by erstwhile John Mahama government in 2015.

The demonstration attended by hundreds of residents including some Traditional leadership was to remind the ruling government of the need to complete the 200-bed Abetifi District hospital project which will also serve as a referral hospital for health facilities on the Kwahu Ridge upon completion.

The convenor of the group, Mr. Godwin Ntiamoah, who addressed the media said, all efforts made by chiefs and people in the area to get the Akufo Addo-led government to continue the project have not yielded a positive response.

He said in March this year, the Eastern Regional Minister, Mr Seth Kwame Acheampong, assured during a courtesy call on the Paramount Chief of Kwahu, Nana Daasebre Akuamoah Agyapong II, at his palace in Kwahu-Abene that work will resume on the project soon as funds had been secured for its completion.

However, nothing has happened since.

The convener said Kwahus were expecting the government to capture the Abetifi hospital in Agenda 111 to demonstrate its commitment to the project but the contrary was the case.

“A building that was near completion stage in fact the building was roofed, look at how dilapidated the building is, now the building has become a habitat for animals and weeds. Why should we waste the taxpayers’ money? We voted and what we deserve should be given to we the Kwahu people”

“Historically, we the Kwahu people have not demonstrated before because we don’t depend on the government , we work hard and do developmental projects by our self, God has blessed the Kwahu people already. But look we are talking about health issues here, once you eat you can fall ill . we are not doing politics here, this is not NPP, NDC matter”.

The group presented their petition to the Chief of Abetifi, Akyemfuor Asiedu Agyemang II who doubles as Adontenhene of Kwahu Traditional Area.

The Abetifihene endorsed the demonstration stating that it is disheartening how the hospital project has been abandoned depriving the area of quality healthcare. He pledged to forward the petition to the appropriate quarters.