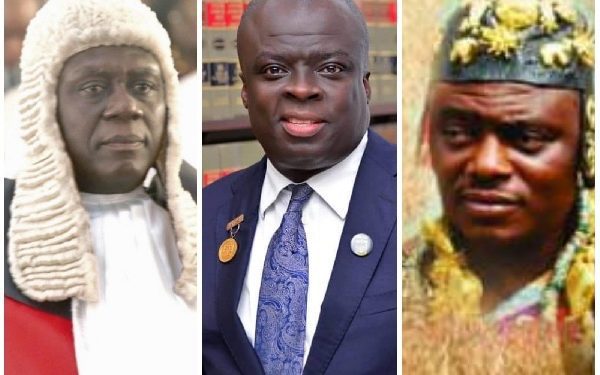 547
SHARES
3k
VIEWS
Share on FacebookShare on TwitterShare on WhatsApp

Follow the decision of the General legal council to have Akwasi Afrifa sanctioned at all cost for stating his former client told him Chief Justice demanded for a 5 million dollar bribe, Akwasi Afrifa has reportedly filed a motion to quash the judgement of the legal council.

Detail of that below

LAWYER AFRIFA ON THE WARPATH
…Cites administrative, procedural improprieties in application for
Certiorari and Prohibition

Lawyer Afrifa for professional misconduct and subsequently charged him
with nine counts of misconduct.
But Lawyer Afrifa has filed motion on notice for judicial review in
the nature of certiorari and prohibition in line with Order 55 of the
Constitutional Instrument (C. I. 47).
The motion filed on Monday August 2, 2021, is seeking an order
quashing the purported proceedings of the Disciplinary Committee of
the GLC on July 15 and 29, 2021 on the grounds that the said proceedings are
wrongful, illegal and contrary to the rules of natural justice.

The applicant further explained that the proceedings were bereft of
administrative propriety and immersed in procedural impropriety
contrary to the Wednesbury Principle and errors on the face of the
record as well as the absence of conditions precedent to the
exercise of jurisdiction.
Lawyer Afrifa is also seeking an order prohibiting the Disciplinary
Committee of the GLC from embarking on any purported hearing based on
the said fundamentally flawed proceedings.
Lawyer Afrifa wants an order of the High Court to compel the
Disciplinary Committee to perform its statutory duty in line with
mandatory rules prescribed in Legislative Instrument (L. I. 2424.).

The lawyer also wants an order of injunction restraining the
Disciplinary Committee, its agents, representatives, officials,
privies and those acting by or through its instruction, order or
mandate in any manner whatsoever, from in any manner continuing the
patent illegality and absence of administrative transparency and
opaqueness in respect of the alleged complaint against him per a
letter of March 1, 2021 by proceeding to hear evidence in relation
to the said complaint without first complying with the dictates of
the law.
In an affidavit in support of the application for the judicial review,
Lawyer Afrifa argued that even though the Complainant’s response to
his answer to the original petition had not been served on him, the
Committee insisted on conducting the proceedings of July 15, 2021
to determine whether a prima facie case had been established
against him and that the said response was not necessary to be
served on him.
The deponent indicated it was only after he had insisted that he was
given a copy of the said response that the Committee furnished him a
copy and there and then continued the preliminary hearing.

According to the 18-point affidavit, though the complainant could not
assign any evidence on the charge or complaint in his petition
against him, the Disciplinary Committee concluded that
he was guilty of professional misconduct and indicated that the
charges would be made known to him on July 29, 2021.
Lawyer Afrifa stated that he pleaded not guilty to all nine
charges read to him at the sitting of the Committee on July 29, 2021 whereupon the Committee said it would communicate the date of hearing to him.

Supporting the call for a judicial review , the applicant contended
that the Committee disregarded its own rules and procedures thus
making the proceedings of the said two sittings on July 15 and 29,
2021 illegal and bereft of any validity whatsoever hence liable to
be quashed.

He further contended that the proceedings by the Committee were
conducted in an illegal manner thus breaching the rules of natural
justice, infringes administrative propriety and lacking procedural
propriety contrary to the Wednesbury principle.
The applicant stated that the Committee had disregarded
conditions precedent to the assumption and exercise of jurisdiction
and that the entire procedure by which the Committee arrived at
the nine charges against him infringed fundamental and
indispensable legal prerequisites without which any purported
proceedings is null and void and utterly devoid of legality.

Lawyer Afrifa observed that the deliberate side-stepping of
mandatory rules and legal principles has occasioned and further
threatens to occasion miscarriage of justice to him in a manner
negating his constitutional and common law rights.
The applicant further disclosed that the panel of the Disciplinary
Committee which heard the preliminary enquiry on July 15, 2021 was
different from the panel which read the nine charges to him on July
29, 2021.

He pointed out that the Disciplinary Committee has committed
several errors on the face of Record hence the justification for the
intervention of the High Court to ensure that illegality is not
continued blatantly with the view to undermining the legal and
constitutional protection due him.

Lawyer Afrifa indicated that grant of the application for a judicial
review would be in accord with justice and that refusal of same would
compel him to undergo time-consuming and illegal proceedings which the
Court is duty bound to thwart and prevent by granting the application.
E N D.