Lockdown | 12 cops arrested during weekend, including 5 who drank at Free State tavern 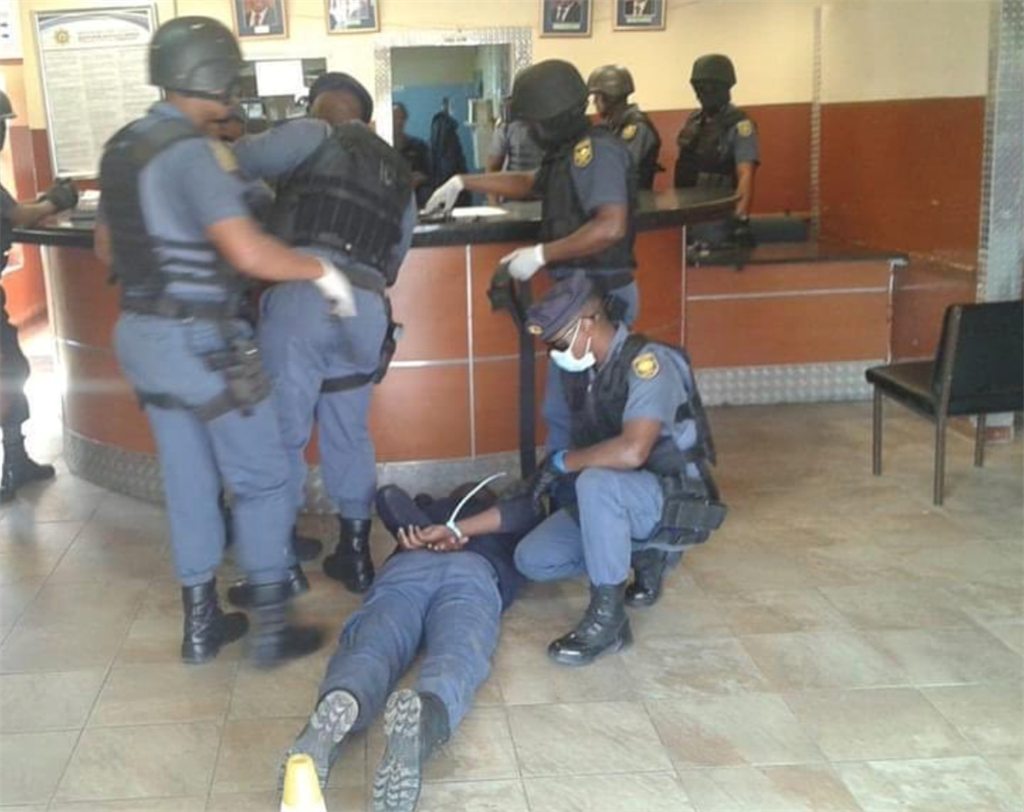 8
SHARES
45
VIEWS
Share on FacebookShare on TwitterShare on WhatsApp

Twelve members of the South African Police Service (SAPS), including a reservist, were arrested during the weekend in three separate incidents following their alleged violation of National Disaster Management Regulations, as well as corruption.

According to national police spokesperson Brigadier Vishnu Naidoo, in the first incident, five members, including a police reservist attached to the Namahadi police station in Phuthaditjhaba in the Free State, were arrested because they were allegedly part of a group drinking alcohol at a local tavern on Saturday.

Images of the officers drinking in the tavern, and their subsequent arrest, were widely circulated on social media at the weekend.

“While the greater majority of SAPS members have been hard at work to flatten the curve of the spread of the Covid-19 virus, there have been some members disregarding the regulations as well as committing some heinous crimes, thus bringing into disrepute both the SAPS as well as the good work its members are doing,” Naidoo said on Monday.

Naidoo said the officers who were spotted at the Free State tavern initially escaped as members were about to pounce on them.

“However, they were later arrested [on] Sunday as they reported for duty. Pictures of the members being arrested went viral, a moment that SAPS management is not proud of, but the arrest was indeed a necessary course of action,” Naidoo said.

“The 44-year-old tavern owner was also arrested on the same day for violating the regulations on the prohibition of the sale of liquor. All liquor was seized and the tavern shut down. The police officials will be charged with defeating the ends of justice and failing to enforce and adhere to the National Disaster Management Regulations.”

In the second incident, six members attached to the Brooklyn and Silverton police stations in Pretoria were arrested on Saturday after members of the Mpumalanga Anti-Corruption Unit received information that the officers had stolen more than R30 000 in cash from a group of people passing through a roadblock.

According to Naidoo, the police officers initially demanded a bribe of R100 after realising that the driver of a sedan and two passengers were not in possession of the required documentation. The money was allegedly stolen after the sedan was searched at the roadblock.

All six police officers were arrested after they were found in possession of the money and they are being detained at a local police station.

In the third incident, a police officer was detained after he allegedly held a gathering at the police barracks in Soshanguve in Tshwane.

“Fighting corruption and restoring the integrity of the [SAPS] remain a top priority for police management. The arrest of our own will send a stern warning to all men and women in blue as well as all law enforcement agencies to steer clear of criminality and corruption at all times.”

While these incidents are disappointing, it must be noted that these are isolated incidents, Naidoo said.

“The arrest of these police officers is indicative of the SAPS’s commitment in the fight against this pandemic.

“We continue to urge all our members to remain focused on the cause of ridding our country of the pandemic by continuing with the enforcement of the Disaster Management Act Regulations,” Naidoo said.

“The arrest of our own is both disheartening and at the same time pleasing in the sense that it shows that the SAPS remains unbiased and that it has the capacity and the capability to decisively deal with criminality within its ranks,” said Sitole.

Naidoo added that the arrest of 13 foreign nationals for breaking the lockdown regulations in Tongaat, north of Durban, and the arrest of those dealing in liquor as well as the seizure of over R8 million worth of alcohol, on the South Coast and in Pinetown in KwaZulu-Natal, should send a stern warning to all those who violate the regulations.