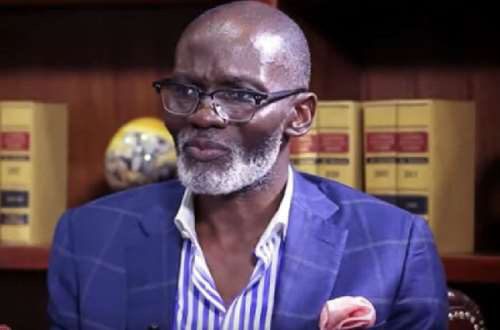 14
SHARES
78
VIEWS
Share on FacebookShare on TwitterShare on WhatsApp

Even before the Supreme Court decides on the matter before it by the minority on the legality of issues around the e-levy, Akufo Addo’s cousin whom many have said is the prime minister has made a serious prejudicial statement saying the court will through the application out.

The founder of the Danquah Institute (DI), Gabby Asare Otchere-Darko has described the Minority’s decision to file an injunction at the Supreme Court to stop the implementation of the Electronic Transaction Levy (E-Levy) as a political gimmick.

According to the known member of the New Patriotic Party (NPP), the Minority even knows the application for the injunction won’t go anywhere.

“I don’t want to pre-empt it [the outcome of the case] but I think that legal move was just made…It is what I call ‘takashi’ because really, what is a quorum today? Is it 137 or 138?

“So, I’m saying that they themselves [Minority] know that the case that they have before the court is not likely to go anywhere,” Mr. Gabby Otchere-Darko told Asaase Radio in an interview.

He continued, “It is a political gimmick if you ask me, but of course, they have to show it to their grassroots that they’re doing something about it. But anyway, allow it. Let’s wait to see what the court will have.”

The Minority led by its Leader Haruna Iddrisu together with members Mahama Ayariga, and Samuel Okudzeto Ablakwa filed an application at the Supreme Court last week seeking an injunction to stop the Ghana Revenue Authority (GRA) from commencing the implementation of the controversial E-Levy.

Per the arrangements between the Ministry of Finance and the GRA, the implementation of the levy will kick start on May 1, 2022.

If it goes according to plan, all financial transactions via electronic means that exceed GHS100 per day will be charged a tax of 1.50%.