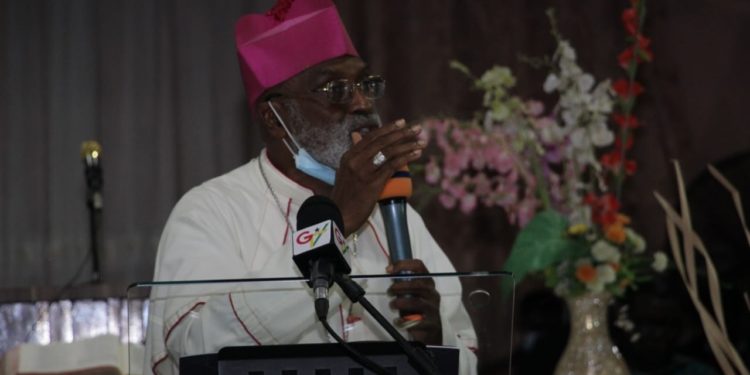 169
SHARES
937
VIEWS
Share on FacebookShare on TwitterShare on WhatsApp

According to Palmer-Buckle, when Moses was instructed by God to build a temple when Israelites were in the desert despite going through tribulations, they joyfully supported for its realization to the Glory of God which became a blessing to them.

“The argument against this cathedral has been that, there is hardship and people are hungry so forth and so forth. But when God instructed Moses to build the Tabernacle for God, Israelites were on dessert, didn’t have what to eat but they contributed and contributed so much that it exceeded expectation in building the Tabernacle.”

He, therefore, encouraged Christians in the country to contribute towards the building of the national cathedral to the Glory of God.

“If we get one million Christians of the 23 million who will donate every month just ghc100 cedis per person for three years so that at the end of the day you have ghc1,200 times one million it means we will have 200 million cedis a year. If we will be consistent with that we can finish that project in time.”

He mentioned that there will be a digital donor wall recognition at the cathedral in which the names of every donor will be acknowledged for generations to appreciate them.

Most Rev. Charles Gabriel Palmer-Buckle said revenue accrued from the cathedral when completed and opened will be used to support other developmental needs of the country.

He stressed that the National Cathedral should not be politicized stating that even though President Akufo Addo envisioned and championed the project, it doesn’t belong to him rather will become a national monument.

The Eastern Regional Minister, Seth Kwame Acheampong noted that the building of the cathedral is a significant monument that is the representation of the beliefs of the country.

“The national cathedral is a monument we are putting up to reflect our beliefs and social aspirations as well as our Political culture. Our national cathedral is significant not only for the functions it serves but in the cultural values it represents. Our country Ghana has a population of about 70% Christians and there is not a single edifice to speak to this fact, however, with the national cathedral in the offing, it will represent our society which wholeheartedly is dependent on God,” Seth Acheampong said.

The President of the Eastern Regional House of Chiefs who doubles as Konor of Manya Krobo Traditional Area, Nene Sakitey called on the citizenry to support the building of the monument.

He said two distinct fundamentals that profile society today are religion and culture therefore the National Cathedral designed with cultural and religious resemblance would help enhance harmony and promote tourism in the country.