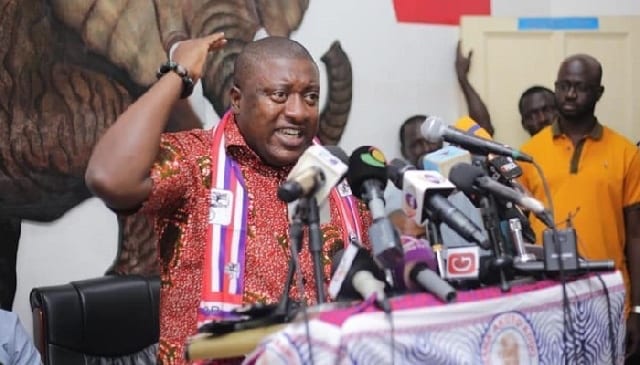 104
SHARES
579
VIEWS
Share on FacebookShare on TwitterShare on WhatsApp

The national youth wing of the governing New Patriotic Party has issued a statement saying it “learned with profound concern” reports of the “alleged murder of Ibrahim Mohammed aka Kaaka and the unfortunate death of two protesters in Ejura in the Ashanti Region” and chastised the biggest opposition party, the National Democratic Congress (NDC) of seeking to ride the waves created by the incident for political capital.

The statement, signed by National Youth Organiser Henry Nana Boakye and dated Thursday, 1 July 2021, that: “At the outset, we condemn, in no uncertain terms, the alleged mob attack that led to the untimely death of Kaaka and also the use of disproportionate force by the joint security force against the rampaging youth in Ejura”.

The NPP youth wing said: “We sincerely sympathise with the families of the deceased and pray that the good Lord comfort and strengthen them in the difficult times they find themselves”.

The statement said as “agonising and regrettable as the death of these three individuals are”, the youth wing, “in all humility, appeals to the youth in Ejura to calm down and tread a path that engenders peace, love and unity to honour the memories of the dead”

The NPP youth wing said “as youth, we hold the key to the future of our great nation and we cannot jeopardise this great task by resorting to instant retaliation and violence, which threatens the peaceful coexistence in our country”.

The youth wing said it welcomes and supports the directive of President Nana Addo Dankwa Akufo-Addo to the Minister for the Interior, Mr Ambrose Dery, “to immediately” conduct a public inquiry into the circumstances that led to the “unfortunate occurrences on Tuesday, 29 June 2021”.

“Again, we add to the numerous calls on the police to expedite investigations into the unfortunate death of Kaaka and serve justice to him and the bereaved family by bringing the perpetrators to book”, the statement said.

The NPP youth wing expressed reservations about the NDC’s posturing over the matter.

It is deeply worrying that the opposition NDC seeks to use these very unfortunate and tragic occurrences as an opportunity to undermine the peace and progress we have collectively attained in almost 30 years of our democracy, admired and spoken about in the sub-region”, the statement noted.

It said as citizens of Ghana and as youth, “it is our duty to denounce and condemn such statements which rather weakens our strength as a nation in fighting atrocious acts”.

“We must take up the call for social justice in an appropriate manner, which ensures that all are protected and we contribute in the collective effort to support the peace process”.

“Once again, we solemnly commiserate with the families, friends and loved ones of the deceased and wish the injured a speedy recovery”

The youth wing of the NDC has written to the Inspector-General of Police, Mr James Oppong-Boanuh, to notify the Police Service that it will hold a demonstration and street protest.

The exercise, dubbed: “A March for Justice” will be held in Accra on Tuesday, 6 July 2021.

A letter signed by the NDC National Youth Organiser, Mr George Opare Addo, on 30 June 2021, indicated that “this protest is to demand justice for all persons killed and brutalised by state-sponsored thuggery and/or adventurism by police and military forces.

Afterwards, all protesters will converge on the Jubilee House to present a petition to the President and head to the police head office to present petitions to the IGP and to the Speaker of Parliament at the Parliament House.