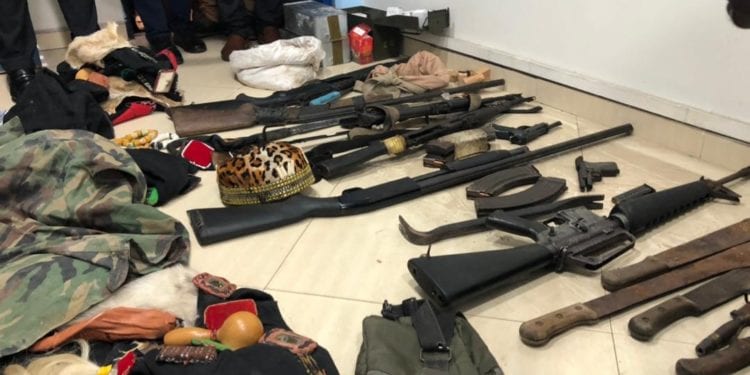 204
SHARES
1.1k
VIEWS
Share on FacebookShare on TwitterShare on WhatsApp

The Police have retrieved a total of two thousand eight hundred and eighty-two rounds of AK-47; 7.63 ammunition from suspected armed robbers at a hideout at Ntoaso in the Eastern region.

According to the police, one of the suspects was gunned down in a raid that was followed based on a tip-off.

CID boss COP Mr Isaac Ken Yeboah made this known at a press briefing on Wednesday to update the media on major robbery and election violence incidents that his unit was investigating.

He disclosed “yesterday, as part of the security measures adopted by the police administration under the new anti-armed robbery taskforce strategy to curb robberies and other violent crimes in the country, intelligence from a source had indicated that some armed robbers were in possession of arms and ammunition and have concealed them at Ntoaso, a town in the eastern region.”

“In response to the intelligence gathered, the team from the national operations directorate, surveillance unit, and other combat patrol teams were dispatched to the location to retrieve the said weapons.”

He went on to detail that “on reaching the location, the suspected robbers took to their heels on seeing the police. The team began a search in the premises and in the process, one of the suspected armed robbers, yet to be identified, who was hiding in the nearby room opened fire on the police and hit the hand of one of our officers, injuring his two fingers in the process.”

The police officer is on admission at the police hospital. ”Video Player

He added, “the police also responded accordingly and gunned down the suspect robber while others escaped arrest.”

“We were however able to arrest one again and then when the team was moving from the place to headquarters, one of the suspects attempted to snatch the weapon from one of the policemen, and then he was also gunned down.”

Listing items retrieved during the raid Mr Yeboah enlisted “these are the items that were retrieved from them; one AK-47 assault rifle, one M-16 rifle, one pump action gun, one shotgun, a locally manufactured pistol, 2, 882 rounds of Ak-47 7.63 ammunition. and 840 rounds of M-16 ammunition 23 bb cartridges, 17.62 cartridges.

Mr Yeboah lauded Ghanaians for their continued provision of information to the police to make arrests and combat crime.

He said, “we are proud of every Ghanaian who is giving information.”