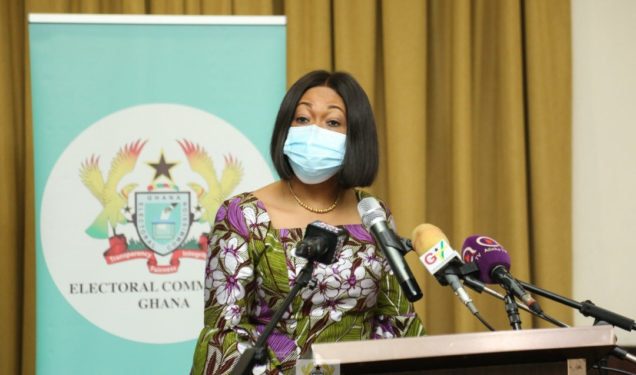 87
SHARES
484
VIEWS
Share on FacebookShare on TwitterShare on WhatsApp

The next National Democratic Congress (NDC) administration will remove current Electoral Commission Chairperson Madam Jean Adukwei Mensa from office just as her predecessor was kicked out.

When we (NDC) come into power, we will use all means in as the way and procedure used in sacking Madam Charlotte Osei to also kick Jean Mensa out”, Mr. Peter Boamah Otokunor, the General Secretary of the NDC said in an interview with Kumasi-based radio Hello FM.

According to Mr. Otokunor, Madam Jean Mensa does not deserve to occupy the position looking at the way she conducted the 2020 general elections which was characterized by violence and saw at least 7 people dead across the country.

“I have said it and will say it again that, considering Jean Mensa’s duty as Electoral Commissioner, she does not deserve to occupy that position, not even for another day but because President Akufo-Addo does not work in accordance with democracy, she will still be there. But when we (NDC) come into power, we will use all means in accordance with the same procedure used in sacking Charlotte Osei to kick Jean Mensa out”. Mr. Otokunor warned.

Meanwhile, the NDC earlier in a press statement issued by the party’s Director of Elections, Elvis Afriyie Ankrah, outlined 34 Electoral reforms after it boycotted Electoral Commission-led efforts towards reforms.

The party says it wants the appointment of the EC chairperson to have prior approval of Parliament. It also insisted the voting period of 7 am to 5 pm on Election Day to be maintained.

The statement further categorically explained that their proposals for electoral reforms and the resultant consultations are borne out of the “serious flaws and failings” the NDC observed during a comprehensive review and audit of the 2020 elections that “affected the credibility of the elections.”