“No amount of digital propaganda can take away the excruciating hardships face by Ghanaians.”
John Dramani Mahama 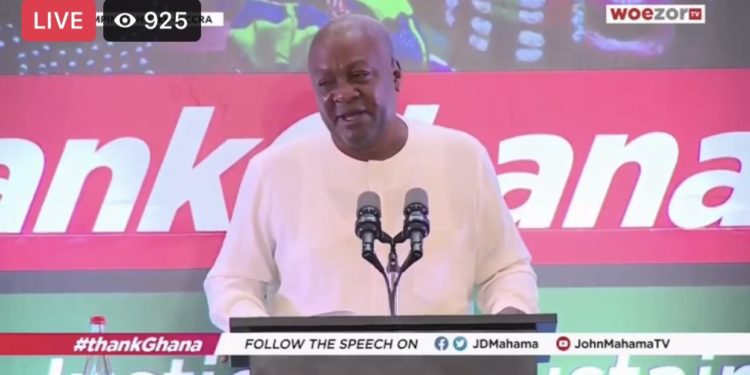 116
SHARES
647
VIEWS
Share on FacebookShare on TwitterShare on WhatsApp

Former President John Mahama has said no amount of digital propaganda being fueled by Dr Bawumia and his surrogate in the NPP can quash away the suffering of Ghanaians.

The former President and the past leader of the NDC in the 2020 elections said policies must sync with the collective good of the people.

He expressed his surprise about Bawumia who made a lot of noise on opposition in about Ghana’s economy now running away from the very things he spoke about to be an “IT” person.

Mr Mahama was speaking at an event held in Accra on 10th November 2021 to mark the last phase of his “Thank You Tour” to Ghanaians for their support in 2020 elections even though the result didn’t go their way.

In his speech, Mr Mahama said Government should focus on things that will reduce the hardship in the system and added that digitization does not happen in a vacuum but is driven by infrastructure laid down.

He gave a tall list of things his administration did in making sure they send digital ways of doing business to Ghanaians.

He spoke on how his government laid fiber optic cables from Accra to Bawku to Bolga, Yendi and Tamale and thus build other infrastructure to support the idea of digitization.

For the past years, Bawumia who touted himself as an Economist and economic messiah seem to have been overwhelmed by his own ineptitude and has run from giving commentary on Ghana’s economy.

The Country’s debt is at record high with prices of goods and commodity skyrocketing every single day.

Mr. Mahama ended his speech by thanking Ghanaians and urging them on to hold the current government accountable and also hope for a better future when the government is kicked out of power in the 2024 elections for the NDC to take over.