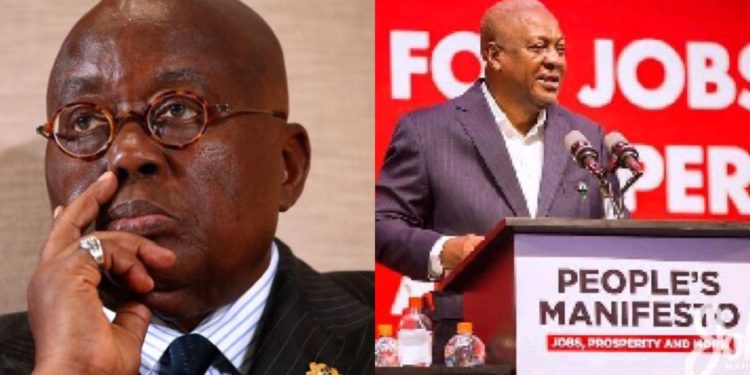 65
SHARES
360
VIEWS
Share on FacebookShare on TwitterShare on WhatsApp

John Mahama has extended a curtesy call to President Akufo Addo not to be shy by implementing policies and program the NDC Presented as its Manifesto for the 2020 elections.

Mr Mahama said the government of the day has demonstrated how inept they are and how limited they have become in thinking through life changing policies and programs.

He said the NDC consulted Ghanaians in putting out their manifesto and the things in there rightly capture the dreams and aspirations of Ghanaians hence even though they are not on Government, the NDC will have no issue if the NPP led by Akufo Addo will find the wisdom in implementing what is in the manifesto of the NDC.

The Adwumapa program which would have created a million jobs in 5 years and expanding job creations in the public sector generally and that of the Private sector.

The NPP has shown they are not ready to govern by already given up on the very promise they made to Ghanaians.

An embarrassing moment was when President Akufo Addo denied promising the people of Cape Coast a Habour when their manifesto Rightly said so.

The call is now up to Akufo Addo if he can crash his ego and consult the NDC for ideas in salvaging the country he has destroyed almost beyond repairs.

“No amount of digital propaganda can take away the excruciating hardships face by Ghanaians.”
John Dramani Mahama

"No amount of digital propaganda can take away the excruciating hardships face by Ghanaians."
John Dramani Mahama