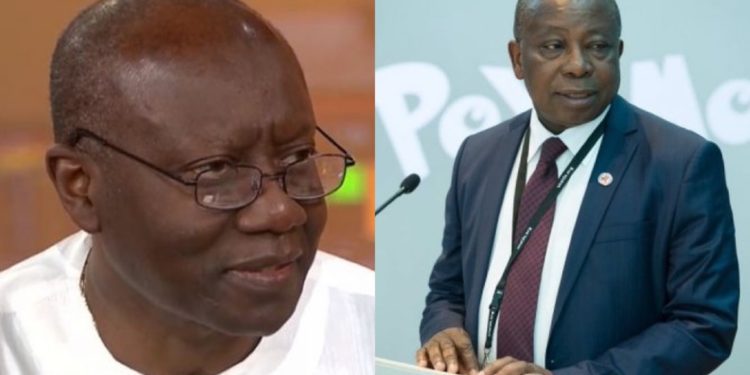 The Minister of Finance, Mr. Ken Ofori-Atta, has jumped to the defense of the Health Minister, Kwaku Agyeman-Manu, as calls for his resignation deepen over the botched Sputnik V vaccine deal.

Mr. Ofori-Atta insists Ghanaians are being unsympathetic despite the efforts of the Health Minister to secure vaccines for the country when the lives of citizens were at stake.

An ad-hoc bipartisan parliamentary committee that probed the deal recommended among other things that the Finance Minister takes steps to recover over $2 million paid to Sheikh Ah Makhtoum for undelivered vaccines.

Meanwhile, the Sheikh has in response to a letter from the Health Minister requesting a refund agreed to pay the money.

This is in spite of the Health Minister’s claim before the committee that he was not aware that any money had been expended for the vaccines.

Speaking to Accra-based Asaase Radio, the Finance Minister, who has also been criticized over the payment of the monies to the businessman, maintained that the Health Minister did nothing wrong.

“The people [middlemen] have said they can’t supply the vaccines; which means that they have broken the contract, and then we get our $2 million back, and then we move on. But to be so unsympathetic to somebody who felt that what can he do to ensure that there is continuity for Ghanaians, and now sit comfortably to chastise him without empathizing with him; I am empathetic of him, and I expect that others will also realize the type of pressure that he was under at the time and his commitment to ensuring that Ghanaians are safe.”

“Why are we over-concentrating on the Health Minister in the discussion about the botched Sputnik Vaccine Supply deal when the chief culprit is none other than the Finance Minister, Ken Ofori-Atta, who without Parliamentary approval, paid a whopping 160 billion old Ghana cedis to the Dubai Sheikh”.

Agyeman-Manu has suffered at Health Ministry – Nana Addo
On the same issue, President Nana Addo Dankwa Akufo-Addo, has said the Health Minister, Kwaku Agyeman-Manu, has endured a lot of suffering at the Ministry.

The President however acknowledged the Minister as one of the illustrious sons from the Bono Region who has served well in his administration.

“There are a lot of people from the Bono Region in my government; including the Minister of Health, who is currently receiving slaps [from Ghanaians]. He is an indigene of Dormaa.”

“He has really suffered in that Health Ministry and is still suffering,” he said of the appointee while laughing together with dignitaries and others gathered at the venue.”