On-stanby SANDF to provide field hospitals in fight against coronavirus 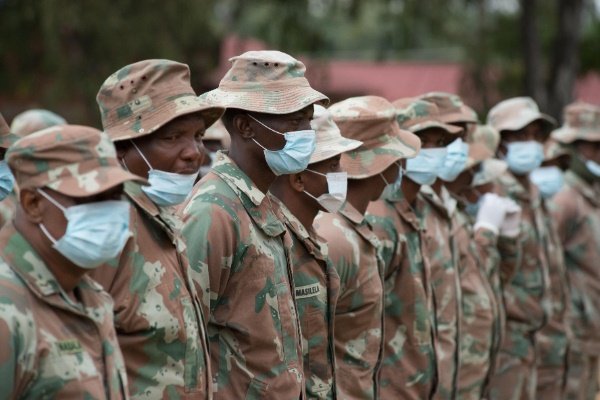 The entire SA National Defence Force (SANDF) has been put on standby.

The deployment of more than 73 000 SANDF members will include medical personnel and it might include field hospitals, Defence and Military Veterans Minister Nosiviwe Mapisa-Nqakula said when she addressed the Joint Standing Committee on Defence about the deployment on Wednesday.

She added the SANDF had deployed elements of the regular and reserve forces to all nine provinces to fulfill its obligation in support of the national effort to contain, mitigate, prevent and manage Covid-19.

The SANDF has the following tasks:

– Support the police in the enforcement of lockdown regulations.

– Support and work with the national Department of Health with the management of Covid-19.

– Support the Department of Cooperative Governance and Traditional Affairs to maintain or enhance living conditions of the population.

The more specific tasks members will be involved in include:

Furthermore, the SAMHS will provide medical support to the military community (members and their dependents), provide personal protective equipment to deployed members and those involved in patient care, conduct screening and testing.

It will prepare military hospitals with dedicated wards and beds for isolation and quarantine as well as deploying field hospitals and supporting the Department of Health.

Mapisa-Nqakula said the entire SANDF was put on standby as the “magnitude of the challenge” of the Covid-19 pandemic became known and exhaustion set in among the original deployment.

The committee welcomed the deployment.

“The committee is satisfied by the reasons given and the necessity to employ an additional 73 180 members of the SANDF in the fight against the spread of the Covid-19 virus, particularly in light of the information that South Africa is still in the early stages of the pandemic,” read a statement from the committee co-chairpersons Cyril Xaba and Mamagase Nchabeleng.

“Of critical importance is the deployment of the South African Military Health Services and its capabilities, which is necessary to support the Department of Health when considering the trajectory of infections expected as per research by experts,” said Xaba according to the statement.

The committee is also satisfied with the reason that the initial deployment was insufficient, considering the expected scale of the virus.

The deployment was announced on Tuesday evening, shortly before Ramaphosa addressed the nation, when DA interim leader John Steenhuisen tweeted the letter Ramaphosa is obliged to send to Parliament when the SANDF is deployed.

ANC MPs on the committee took umbrage that Steenhuisen tweeted the letter, and the committee resolved to refer the matter to the speaker.

“We view this in a serious light as the publication seem to have been intended to create hysteria against the deployment,” Nchabeleng said, according to the statement.

It has been published in Parliament’s official papers, the Announcements, Tablings and Committee Reports and is now a public document.

– Stay healthy and entertained during the national lockdown. Sign up for our Lockdown Living newsletter. Register and manage your newsletters in the new News24 app by clicking on the Profile tab.

Airbnb hosts getting almost nothing from $250 million relief fund