Parktown North residents open hearts, challenge others to raise donations to help those in need

When Blanche Frölich-Van Zyl decluttered her wardrobe earlier this week, she had no idea it would be the start of a nationwide challenge to give back to those less fortunate.

She is among a group of Johannesburg residents who mobilised their immediate community to do good – and now they’re challenging others to do their part.

“On our Parktown North community WhatsApp group, a number of people were cleaning their house and asking if anyone wanted items they no longer needed,” Frölich-Van Zyl explained.

This sparked an idea with local security company Cortac’s director Mark Notelovitz, who formed a partnership with the Johannesburg Chapter of the South African Special Forces Association veterans to collect the donations and deliver them to registered non-profit organisations selected by the residents.

Each donation is collected by a Cortac employee from outside the donor’s property, with their permit allowing them to travel as an essential service during lockdown, along with a SASFA volunteer armed with a permit for welfare work.

Frölich-Van Zyl was joined by around 40 neighbours on her street, and the size of the donation was staggering. 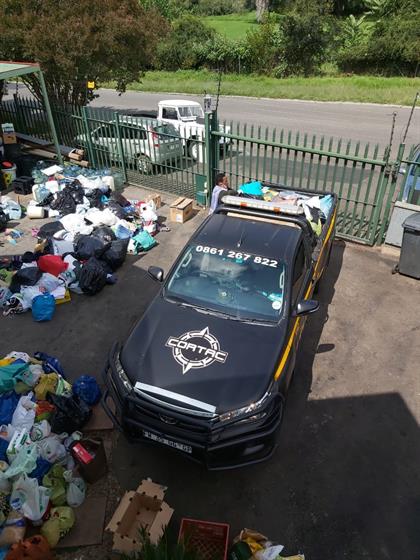 Johannesburg residents have taken up the challenge to given back to those less fortunate by mobilising their immediate community. (Supplied)

“It would have been enough to stock a small Woolworths store,” she said.

As she looked at the piles of boxed donations on the street, Frölich-Van Zyl realised the potential of the community project which could be rolled out to homes across the country.

“Not everyone is able to make a cash donation, but everyone has something in their cupboard they don’t need,” she said.

“Since posting photos of the donations online, I’ve had an avalanche of calls for help, from orphanages with 250 children that have been forgotten, to old age homes without food.”

In partnership with Cortac and SASFA, Frölich-Van Zyl is now coordinating a nationwide community response called Let’s Give A Helping Hand to assist those affected by the national lockdown, with the aim of replicating the Parktown North movement in other areas. Communities are encouraged to donate homeware, clothing and shoes in good condition, along with non-perishable foods, through a similar partnership to registered non-profit organisations in their areas.

“If you can only give one bar or soap or one tin of food, that’s a bar of soap or tin of food that someone doesn’t have,” Frölich-Van Zyl said.

To participate, or for more information, email Frölich-Van Zyl on letsgivesouthafrica@gmail.com

How Gen Z and millennials plan to spend after coronavirus crisis