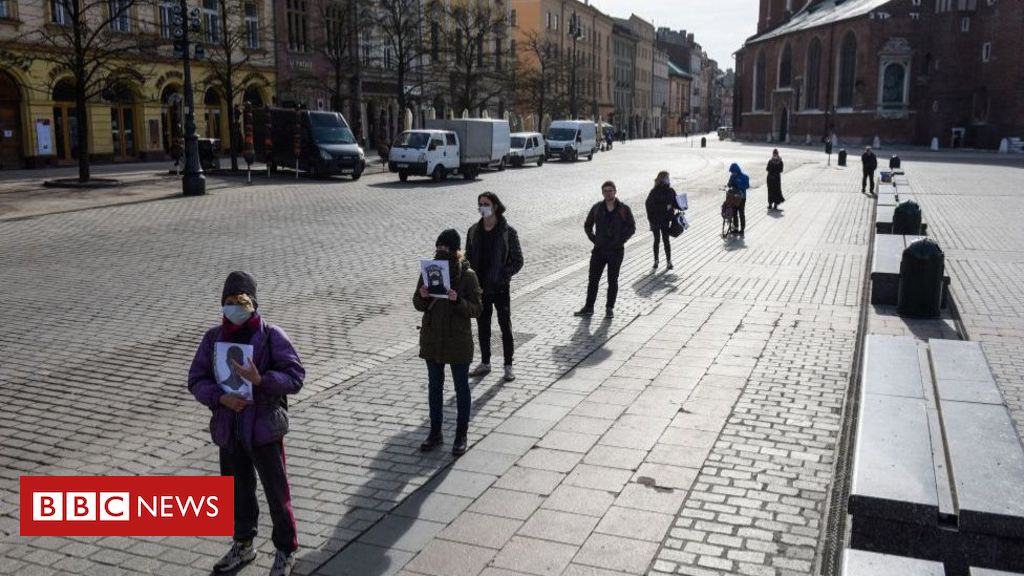 Protesters in Poland have defied the coronavirus lockdown to oppose a proposal that would almost completely ban abortion.

Public gatherings are banned, but videos show people in the streets of Warsaw and Poznan on Tuesday standing around 2m apart and holding placards.

Others hung posters on bikes or posted videos online in a “virtual protest”.

On Wednesday parliament will debate the ban on abortions of foetuses with serious abnormalities.

Poland’s abortion laws are among the strictest in Europe – it is only allowed in cases of rape or incest, if the mother’s life is at risk, or if the foetus is seriously compromised.

The draft legislation would ban terminations of a foetus if tests show it to be irreversibly damaged.

Currently that accounts for around 98% of legal abortions in the country.

Another bill up for debate would criminalise “the promotion of underage sex”, which women’s rights groups say in effect bans sex education in schools.

It states that people who encourage anyone under the age of 18 to have sex could face a maximum three years in prison.

Amnesty International and Human Rights Watch have called on politicians to reject the bills, which were first put forward in 2016 by the ruling nationalist Law and Justice party.

But huge street protests in which people wore black caused the government to withdraw the proposals.

“The Polish government’s focus during the pandemic should be to protect people’s health and rights, not diminish them,” said Hillary Margolis, Human Rights Watch’s senior women’s rights researcher.

The bills began as a citizens’ initiative that enables groups to propose legislation if they collect 100,000 signatures.

It is unclear if the Law and Justice party will support the bill.

An online petition opposing the bills has gained more than 700,000 signatures and people shared videos using the hashtag #ProtestAtHome.

And Franek Sterczewski criticised the government (in Polish) for approving the debate during the coronavirus crisis.

Journalist Zaneta Gotowalska wrote (in Polish): “The government is calculating that in the middle of a pandemic they can start discussing the draft bill for tightening the anti-abortion law. We cannot gather, but we can still protest and say a firm no.”

Poland isn’t alone in considering changing its abortion laws during the coronavirus pandemic.

Conservative governors including Texas Governor Greg Abbott argued that abortion is a non-essential medical procedure that must be suspended to conserve scarce medical equipment for doctors treating coronavirus patients.

Bans on abortion have been enacted in Alaska, Indiana and Kentucky, and introduced but later blocked by courts in Alabama, Ohio and Oklahoma, according to the news website Politico.

When the ventilator comes off, the delirium comes out for many coronavirus survivors