The President of the Republic, Nana Addo Dankwa Akufo-Addo, has, on Wednesday, 15th April, 2020, received the resignation from office of Mr. Asante Berko as Managing Director of the Tema Oil Refinery (TOR).

This was after he submitted his resignation letter, dated 15th April, 2020 to the President.

“President Akufo-Addo has accepted Mr. Asante Berko’s resignation, and duly notified the Board of Directors of TOR of this development. The President wished him well in his future endeavours,”  a statement signed by Director of Communications at the presidency, Eugene Arhin stated.

Asante Berko Charged With Violation of US anti-corruption Law

In a press release issued Monday April 13, 2020, the Securities and Exchange Commission (SEC) of the US charged Berko with orchestrating a bribery scheme to help a client win a contract to build and operate a power plant in Ghana.

The SEC’s complaint which has been filed in the US District Court for the Eastern District of New York, charges Berko with violating the anti-bribery provisions of the FCPA and federal securities laws. The SEC is seeking monetary penalties against Berko among other remedies.

The SEC alleges that 46-year-old Berko, a dual US and Ghana citizen who is a former executive of Goldman Sachs in London, a subsidiary of Goldman Sachs Group Inc. of the US, helped his firm’s client, a Turkish energy company, to funnel at least $2.5 million to a Ghana-based intermediary to pay illicit bribes to Ghanaian government officials in order to gain their approval of an electrical power plant project.

The SEC indicates that, Berko took deliberate measures to prevent his employer from detecting his bribery scheme, including misleading his employer’s compliance personnel about the true role and purpose of the intermediary company.

Berko who is currently living in Ghana was appointed the MD of the country’s only refinery at Tema in January 2020 following the resignation of its former MD, Mr. Isaac Osei.

Read below the statement from the Presidency 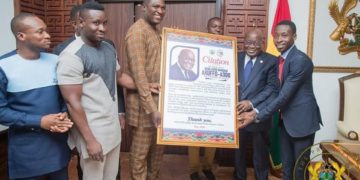