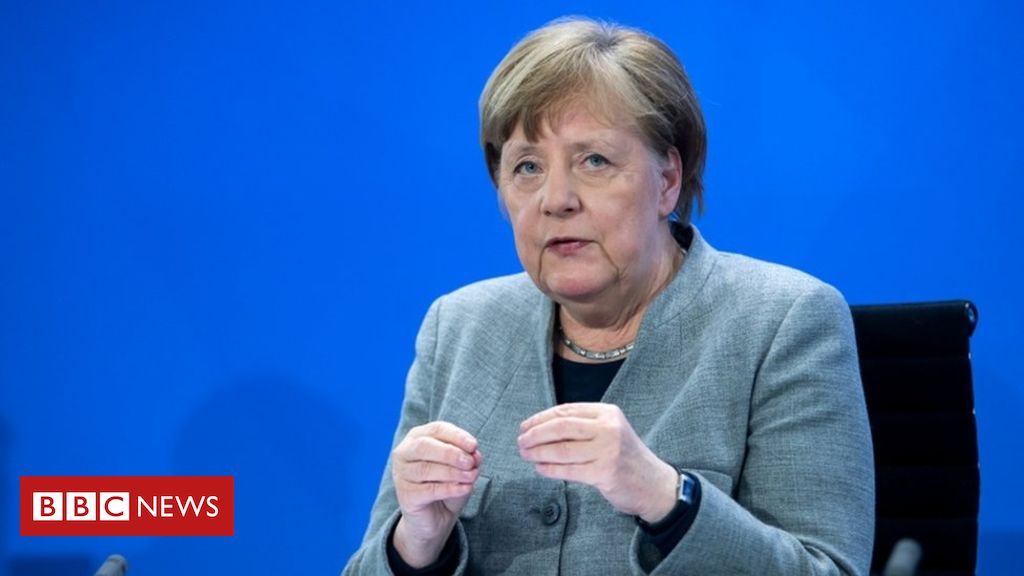 Social distancing rules will stay in place until at least 3 May, with Ms Merkel also strongly recommending people wear face masks in public.

But as of next week shops under a certain size could open their doors.

And schools will start to reopen from 4 May, with priority for students who have exams.

The chancellor said the country “must keep focused and keep going”, adding that they “do not have a lot of room for manoeuvre”.

According to Germany’s Robert Koch Institute (RKI), the country has 127,584 confirmed cases and has reported 3,254 deaths.

France, however, has extended its lockdown measures for four more weeks until 11 May. Belgium will maintain its restrictions until at least 3 May.

And in Russia, veterans groups have called for President Vladimir Putin to postpone the World War Two 75th anniversary victory parade planned for 9 May, because of the risk it could pose to participants.

What did Ms Merkel say?

After a video conference with the heads of Germany’s 16 states, Ms Merkel announced the gradual loosening of the strict lockdown measures.

Schools can reopen “gradually and very slowly” after 4 May, she said, with new safety measures for breaks and school buses, and priority given to those students with exams.

“It will be a great logistical effort and it needs very careful preparation,” she said.

Shops of up to 800 square metres (8,600 sq ft) could be able to restart their businesses from Monday, provided they have “plans to maintain hygiene”, she said.

Car dealers, bicycle shops and book stores can all reopen, regardless of their size. Hairdressers will be allowed to open their doors from 4 May, provided they too comply with strict hygiene measures.

But the lockdown is far from over. The chancellor strongly recommended people don protective face masks while shopping and while taking public transport, saying this “will help to protect other people”.

It makes Germany the latest country to issue guidance on face masks in public – although Ms Merkel did not make it mandatory.

The German government last month passed a stimulus package worth €750bn (£653bn; $816bn) in a bid to help ease the effect of the virus.

Economists and governments are increasingly worried about the impact of the global pandemic. The head of the International Monetary Fund has warned that the world faces its worst economic crisis since the Great Depression in the 1930s.

European Commission chief Ursula von der Leyen set out a roadmap on Wednesday for a gradual lifting of restrictions across the 27-state bloc, but made clear it was not a signal to act immediately.

She set out key conditions involving a significant decrease in the spread of Covid-19, capacity in the health system, surveillance and monitoring. A donors’ conference will take place online for governments and organisations to pledge money in search of a vaccine, Mrs von der Leyen added.