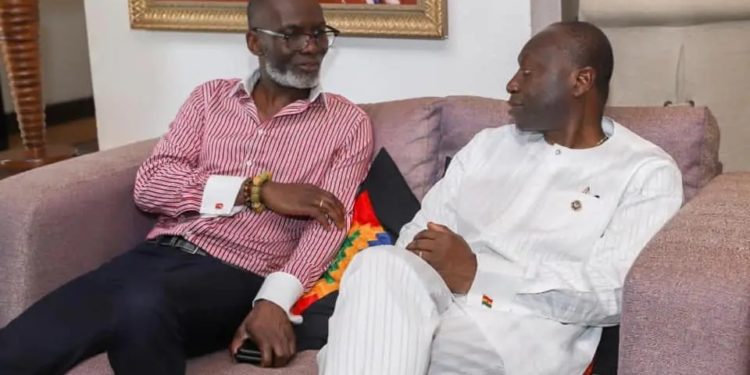 66
SHARES
367
VIEWS
Share on FacebookShare on TwitterShare on WhatsApp

Akufo Addo’s cousin whom many have referred to as the Prime Minister of the Akufo Addo led government and a leading member of the governing New Patriotic Party (NPP), Gabby Otchere Darko has asked Ghanaians whether they want to pay more for road tolls to fix the roads or they want them scrapped totally.

In series of tweets, he asked ahead of the 2022 budget presentation that “Are you prepared to pay more (like double) for road tolls to help fix roads or you want them scrapped completely to ease traffic?”

This is a move of testing waters on seeing reaction of Ghanaians over what looks like a budget full of taxes that’s going to be read tomorrow.

Are you prepared to pay more (like double) for road tolls to help fix roads or you want them scrapped completely to ease traffic?

“Are you counted among the less than 9% of Ghanaians who pay direct taxes and regularly so to keep the country going for the 30 million?”

The Finance Minister Ken Ofori Atta is expected to read the government budget statement for the 2022 fiscal year on Wednesday.

He is expected to announce measure introduced by the government to ameliorate the economic conditions of Ghanains.

Are you counted among the less than 9% of Ghanaians who pay direct taxes and regularly so to keep the country going for the 30 million?

Mr Ofori Atta earlier assured new graduates from the University of Professional Studies, Accra (UPSA) and all Ghanaians youths across the country that the budget statement of the government will prioritize programmes that will support the youth become their own bosses.

He said the government is determined to create the enabling environment for the youth to create their enterprises.

This, according to him, will reduce the over-reliance on the government for jobs and also lessen the burden on the payroll.

He revealed that 60 per cent of Ghana’s revenue is spent on salaries and remuneration for workers on the government’s payroll.

He described this situation as unsustainable.

Speaking at the graduation ceremony at UPSA on Friday October 15, he said “So, the future for you with regards to jobs is the most important thing at this stage. We have gone through a period where most people look for jobs from government etc. That payroll is full because we are spending some 60 per cent of our revenue on remunerating some 650,000 people and that is not sustainable.

“The question then really is has UPSA trained you to be entrepreneurs, and your question will be where the financing is coming from. But you do, in you, have the skills set to be able to do what you have to do.

“Our responsibility as government is to create the environment and the macro stability, currency stability and ensure that you have access to the relevant skills and financing.

“This budget that we are going to be doing is going to really focus on the youth and we will have a programme here, looking at the youth and demands and how we can structure, in the next two or three years, the Ghana Obaatanpa Programme to ensure that you become your own bosses and you become entrepreneurs.

” So there is a new world out there , it is not a factory that employs ten people, but individuals like you employ two or three of four five people to create that energy for our country to transform.”