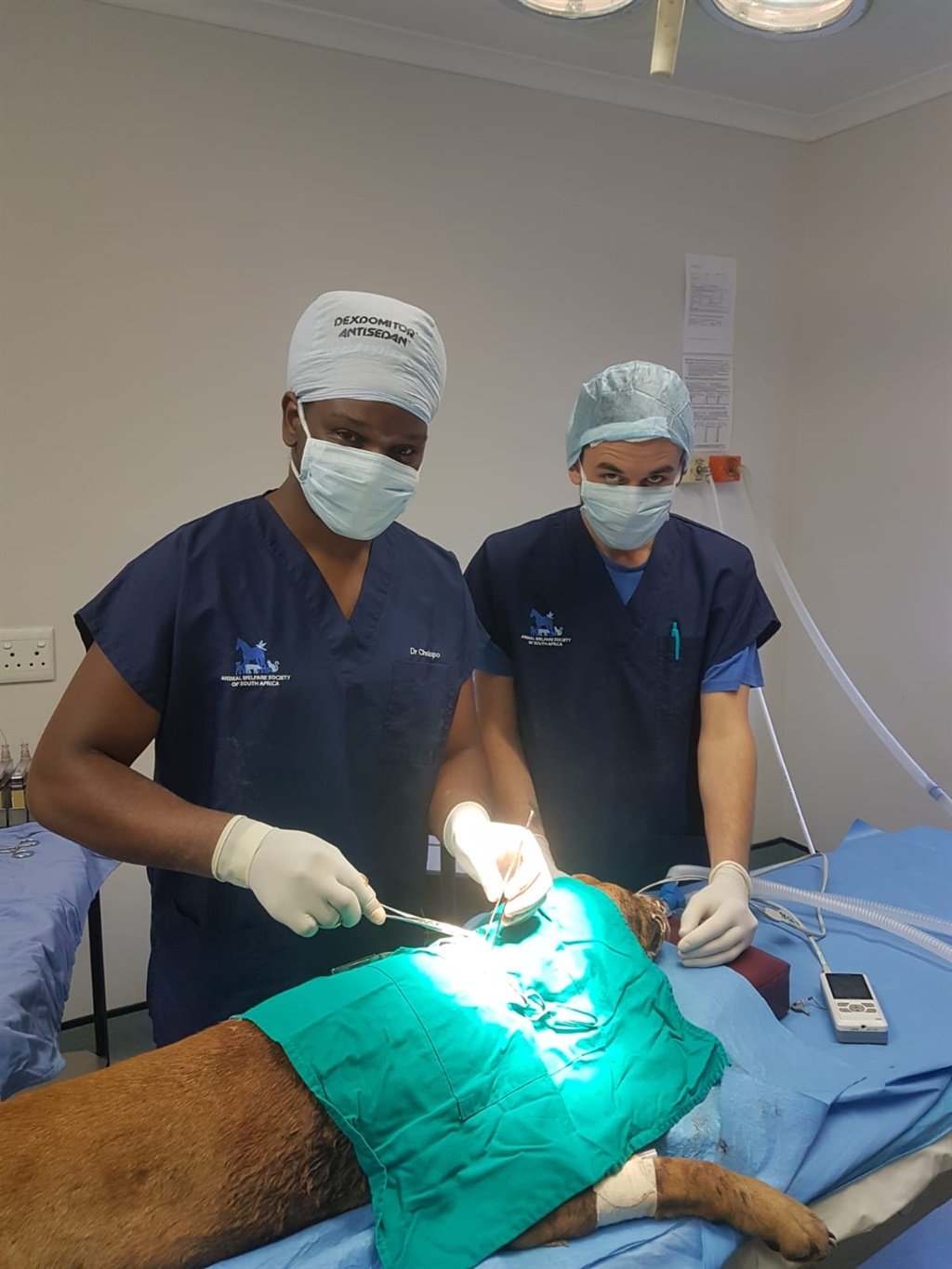 A nine-month-old pit bull-cross puppy named Bruno was allegedly viciously attacked with a chainsaw during the Easter weekend as he seemingly tried to protect his owner.

Bruno was admitted to the Animal Welfare Society (AWS) of South Africa’s Cape Town hospital on Sunday as a result of severe lacerations to his head and body.

According to the AWS, it’s been a rough Easter long weekend for animals on the Cape Flats, with its hospital and inspectorate team barely able to catch their breath between emergencies.

One such case involved the near-fatal chainsaw attack on Bruno in Philippi East.

AWS spokesperson Allan Perrins told News24 that this was not an accident. “The owner brought Bruno to us, covered in blood, and said that someone had attacked the dog with a chainsaw.”

According to Perrins, Bruno’s owner had become involved in an altercation with another man, who wanted to collect firewood from the man’s property.

‘This was deliberate cruelty’

“When he confronted this individual, things got out of hand. The conversation became heated and Bruno then came to [his owner’s] defence.

“The guy became very agitated and took several swipes at Bruno. This was not an act of self-defence – it was a deliberate act of cruelty.”

Perrins said the first and most serious blow was to Bruno’s head, which caused a very deep cut, almost cutting through his skull and barely missing his left eye. Bruno had two other cuts on his body.

“When he arrived, he had lost a lot of blood and was in a state of shock, so he first had to be stabilised and calmed down before being put through the further trauma of surgery.”

Bruno’s wounds were cleaned, he received some pain killers and antibiotics and was wheeled in for surgery by Doctor Ngwako David Chelopo and nursing assistant Jaque le Roux on Monday morning.

READ | Puppy will ‘make it’ after teen bodybuilder broke its leg

“While Bruno recovers, our senior inspector Mark Levendal has made good progress with the investigation and we are confident that the arrest of Bruno’s attacker is imminent.

“Mark told me that he was waiting for an affidavit from the owner, as well as two eyewitnesses. All three have agreed to cooperate so that we can bring a case against the perpetrator.”

Perrins said the identity of the alleged attacker is known to the AWS.

“At the moment, we are only open for emergencies,” Perrins said. “Late last week, I asked [Le Roux] how busy they’d been and what the challenges were. At that stage, they’d already seen 152 emergencies. Most of those cases can be defined as trauma cases similar to Bruno’s case.

“We were hoping to use [the lockdown period] as a breather to catch up with previous cases, but we’ve been busy with some of the most unbelievable cases.”

Perrins said the response to the attack on Bruno has been huge, with many people asking whether he would be put up for adoption.

“We have no reason not to return Bruno to his owner. He loves the dog and Bruno was in a very good condition [prior to the attack].”

Following President Cyril Ramaphosa’s announcement of a 21-day lockdown, and the subsequent two-week extension, the AWS has had to deal with a number of surrendered pets.

“This is not as a consequence of owners unnecessarily fearing that they may contract Covid-19 from their pets, or because they are no longer wanted,” the AWS writes on its Facebook page. “These owners are genuinely worried about how they are going to make ends meet and survive a potential substantial loss of income over this period and beyond, resulting in them realising that they very possibly will not be able to feed and care for them.

“We have established relationships with many of these desperate pet owners and can vouch for the fact they truly care for their pets. Their predicament is beyond heartbreaking and the pressure being brought to bear on our staff unprecedented as we share their pain, loss and grief.

“Listening to their stories and witnessing them having to part with something so precious to them is indescribable.

“We would like to offer as many of them as possible a hand-up – not a handout – in the form of a bag of pet food to see them through this tough patch and to give them time to properly consider their options before parting with their pets.”

Perrins said that the response to its pleas has been “overwhelming”.

“It has been very heartwarming. At the last count, we had raised just under R250 000 and we’ve received a substantial pledge of support from [pet nutrition supplier] Martin & Martin and a few other corporates.

“As a consequence, we’ve been able to offer these people some reprieve for which they have been very grateful. They come to us with their hearts broken, tears rolling down their faces, asking us to please take their dogs because they can’t afford to look after them.

“It’s wonderful to be able to say to them: ‘Here’s a 25kg bag of dog food, go home and let’s reassess the situation when the lockdown is over’.

“The gratitude that we’ve been shown by the community of Mitchells Plain has just been unbelievable.”

If you would like to make a donation to assist, please visit the AWS’s BackaBuddy page.

A man in his 40s with Covid-19 was in a dire situation. Then doctors tried flipping him on his stomach.