Residents of Ejura protest over killing of social media activist 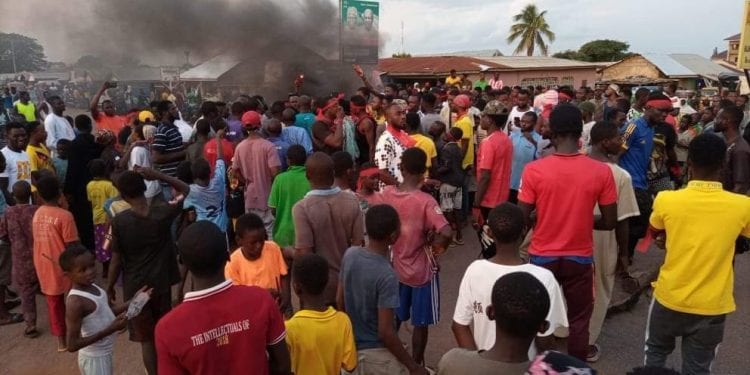 114
SHARES
631
VIEWS
Share on FacebookShare on TwitterShare on WhatsApp

Some residents in Ejura in the Ashanti Region have poured onto the streets to protest the death of a social activist, Ibrahim Muhammed.

The deceased, believed to be a sympathiser of the Economic Fighters League, and recently the #FixTheCountry movement, died after he was allegedly beaten to a pulp by some unknown persons in the early hours of Saturday, June 26, 2021, in front of his house

His family says he was threatened prior to the attack because he has been highlighting some pertinent issues within his community.

Following his passing, some residents marched through the principal streets of Ejura and urged the security agencies to, as a matter of urgency, arrest the perpetrators.

Clad in red head and armbands amidst the chanting of war songs, the distraught residents also held placards with various inscriptions to seek justice for their fellow resident.

“The deceased received death threats for his activism on the refuse dump situation. He was being forced to stop highlighting the ills in the area. We are unable to point fingers at those behind the act. But we will revenge if the perpetrators are not arrested,” one of the protestors said.

Another mentioned that “the police and other security agencies should use the death threats as evidence to get those involved in the heinous crime arrested.”

His shout for help drew the attention of some residents of Sabonline, a Zongo community in the Ejura township, but they came in late to find him lying unconscious.

After assessing the degree of injuries sustained, he was referred to the Komfo Anokye Teaching Hospital.

According to the family of the late Ibrahim Muhammed, he had been using social media to highlight challenges within Ejura, particularly abandoned government projects that he believes deserved attention from state actors.

They believe this action may have influenced some persons to attack him since he had been warned by some unknown persons prior to the attack.