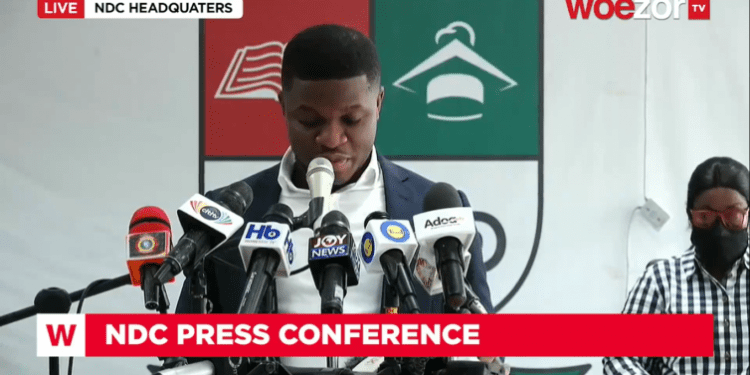 The opposition National Democratic Congress (NDC), has criticized the Attorney General and Minister of Justice,  Godfred Dame, over what it says was his gross incompetence which has resulted in a US$170 million judgment debt awarded against Ghana over the termination of the Ghana Power Generation Company (GPGC) agreement.

The party is also accusing Mr. Dame of being excessively careless and reckless in how he handled processes leading to the abrogation of the contract and its resultant judgment debt.

Addressing the press in Accra on Monday, June 28, 2021, the National Communication Officer of the NDC, Sammy Gyamfi, said, “the NDC is appalled and disgusted by the incompetent sloppiness and recklessness that was displayed by the NPP-Akufo-Addo government particularly, the AG’s department in the conduct of the deal.”

The Akufo-Addo government terminated the GPGC agreement upon recommendation from a committee it set up to review all the power agreements the country had entered into in the heat of the severe power crisis during the NDC era.

This judgment has sparked serious conversations, especially as it comes barely a month after Ghana secured a €170m loan facility for the establishment of a development bank.

The AG has said the decision to cancel the contract saved the country so much more and so it was a better option.

“The state clearly was saved incalculable financial loss by the decision taken by the NPP. The report shows that if all the agreements had been allowed to run, we were going to suffer $17.6 billion over the period. That legal decision taken in the context of the global solution of saving the nation an amount of $17 billion over 12 years, for me was better,” Godfred Dame said.

But the NDC disagrees with this explanation and has blamed the current government for lack of due diligence.

“Clearly, the current AG, Godfred Yeboah Dame, has been incompetent and sloppy as far as this matter is concerned. His desperate attempt to extricate himself from blame and shift blame to his former boss, Madam Gloria Akuffo, and past government officials who left office some five years ago is shameful and unfortunate, to say the least”, Sammy Gyamfi stressed.

The NDC National Communication Officer said Mr.Dame should take responsibility and consider conscientiously exiting office for the mess caused.“In any serious jurisdiction, the AG Godred Yeboah Dame and the solicitor general who are paid by Ghanaians to defend the interest of the country in all matters and who is actually involved in this case would have been held accountable or resign by now.”

The GPCC dragged the government of Ghana to the United Nations Commission on International Trade Law (UNCITRAL) after an official termination in 2018, demanding compensation from the government for a breach of the contract.

The court subsequently awarded the company an amount of $170 million to be paid by Ghana.

Ghana challenged the arbitration award in a UK court, but could not meet the deadlines to file its case citing the COVID-19 pandemic among others as reasons for the delay.

The Attorney General, Godfred Dame, has stated that processes are underway to thoroughly probe circumstances that led to Ghana being slapped with the $170 million judgement debt.

Residents of Ejura protest over killing of social media activist