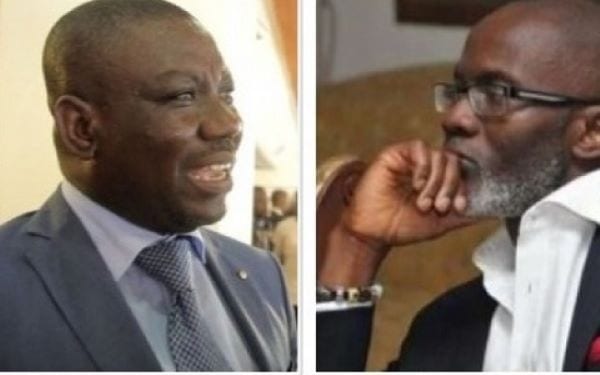 Bolgatanga Central MP Isaac Adongo has described Mr Gabby Asare Otchere-Darko as an “ignoramus” and asked him to “shut up” on finance matters.

The opposition lawmaker’s outburst is a riposte to the Danquah Institute founder’s rebuttal to an earlier write-up.

Mr Otchere-Darko had described as a “big misleading lie”, a claim by Mr Adongo that Finance Minister Ken Ofori-Atta’s Databank and Minister of State nomineeat the Ministry of Finance, Mr Charles Adu Boahen’s Black Star Brokerage,as Transaction Advisors to the Ministry of Finance, stand to make GHS210 million as managers of the government’s borrowing programme with an estimated GHS60 billion a year gross financing.

Mr Otchere-Darko, however, tweeted: “In 2020, Adongo lied that ALA took $2m in fees on gold monetisation work”.

“A big misleading lie!” he said.

“To generate GHS210m in fees, a Bond Market Specialist would have to sell bonds worth over GHS42bn to investors!” he added.

In a rebuttal to Mr Otchere-Darko’s rebuttal, Mr Adongo said in another piece – produced in full below – that: “How such an ignoramus like Gabby, who knows nothing about IPOs, became the transaction advisor in Ghana shouldn’t be a mystery. His uncle is the President and instead of zipping up, he talks”.

This transaction is tainted with potential insider-trading and conflict of interest. They killed competition and set a new low in fiduciary standards and an empty lawyer is celebrating this new normal?” he wondered.

You are in that unique category of homosapiens who have specialised in setting shamelessly new low fiduciary standards.

My initial reaction would have been to wonder if, indeed, Gabby really wrote what has been attributed to him in a new tweet ostensibly responding to me.

But having observed this influence peddler over the past few years, I’m in no doubt that this level of ineptitude is certainly oozing out of the President’s nephew.

Gabby’s firm, Africa Legal Associates, was the transaction advisors to the dubious Agyapa Royalties Deal, which was actually to undertake an IPO. When he (Gabby) was asked a simple question on the pricing of the IPO on Metro TV’s Good Evening Ghana (GEG), he shamelessly and ignorantly said the market will determine the price. Really? The market to determine the price of an IPO?

No amount of adjectives can describe Gabby’s level of ignorance.

For your information, IPOs, as primary market transactions, are determined by valuation of the issuer and not the Market. That’s why you have to get the valuation and prices right because when it starts trading the next day on the secondary market, the market will move the price to the right price. The market only comes in to correct the IPO on the secondary market during trading.

How such an ignoramus like Gabby, who knows nothing about IPOs, became the transaction advisor in Ghana shouldn’t be a mystery. His uncle is the President and instead of zipping up, he talks.

It is so shameless he is interested in how much he was paid and not how he got the job in the face of his obvious emptiness.

Ken Ofori-Atta and Charles Adu Boahen have contracted their own companies to be transaction advisors to themselves and decided how much they should pay their own companies. Gabby is worried as to whether they would earn GHS210m or less. So shameless. This transaction is tainted with potential insider-trading and conflict of interest. They killed competition and set a new low in fiduciary standards and an empty lawyer is celebrating this new normal?

I quoted a rate of 0.35% to do my calculations. What rate are you using to disagree with my figure?

Gross financing needs in 2020 alone, was about GHS75 billion so GHS42 billion under these gluttons who are feeding fat from borrowing is chicken feed. Please, learn some bit of finance and stop displaying this ignorance.

Even if the fee is one cedi, must they award the contract to themselves and shamelessly fix the fee for themselves?

Ironically, Gabby’s concern is that I’m accusing his family members of eating more than they are actually doing. He is not worried about their ethical misconduct.

Gabby, anytime you speak, I feel sad for our country. I have told you to stay away from technical finance issues and focus on your influence peddling.

I will conclude by drawing from the words of wisdom believed to be associated with: Abraham Lincoln, Mark Twain, Maurice Switzer, Arthur Burns, John Maynard Keynes, and Confucius.

Gabby, it is better for you to keep your mouth shut and be thought of as a fool than to speak and to remove all doubts.