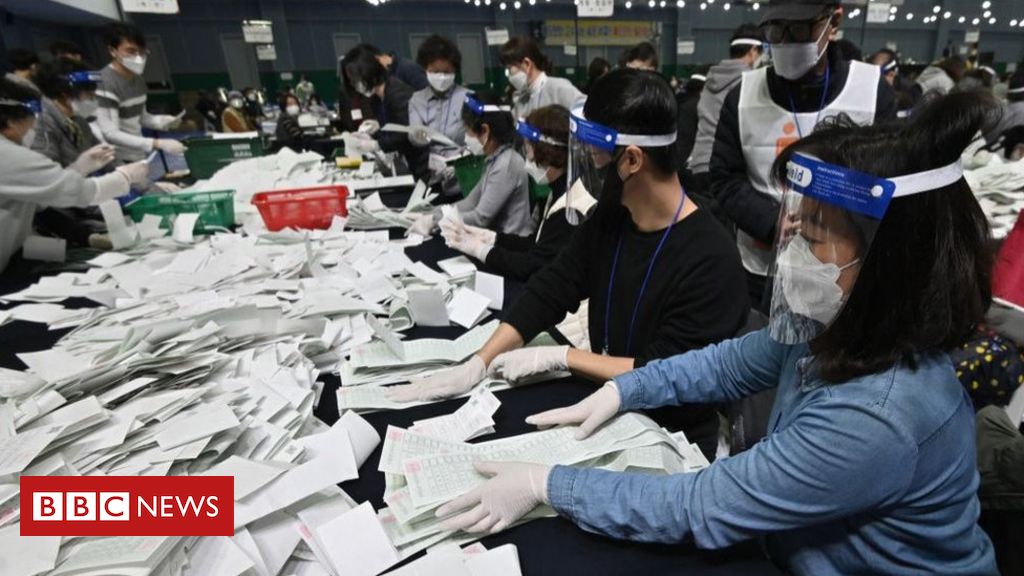 The party of South Korean President Moon Jae-in has won a decisive victory in parliamentary elections, with voters backing the government’s response to the coronavirus pandemic.

South Korea was among the first countries to hold a national vote since the pandemic began.

Strict safety and social distancing measures were in place for the vote.

The party’s sister group, the Platform Party, was forecast to win a further 17 seats, giving the government a total of 180 seats.

Among the winning candidates for United Future was high-profile North Korean defector Thae Yong-ho. Mr Thae, a former senior diplomat at North Korea’s embassy in London, won a seat for the Gangnam district in Seoul.

Although 35 parties put forward candidates, the race was between the left-leaning Democratic Party and the conservative opposition, United Future Party. United Future and its parliamentary partners are expected to win 103 seats.

It is the first time in 16 years that left-leaning parties have secured a majority.

The prospects for President Moon’s party did not look good in January. The South Korean economy has slowed, talks with North Korea have stalled and news headlines were dominated by a series of political scandals.

But the country has managed to combat coronavirus with aggressive tracing and testing measures. It brought the number of daily infections down from a peak of 900 a day in late February to fewer than 30.

The Democratic Party put this effective response at the heart of its campaign.

It has resulted in President Moon’s government winning the largest majority in parliament this country has seen since it held its first democratic elections in 1987.

How were people able to vote?

In order to cast their ballots, voters had to clean their hands with sanitiser, wear face masks and plastic gloves, stand at least one metre (3ft) apart, and have their temperatures taken.

Anyone with a temperature above 37.5C had to cast their vote in separate booths that were then disinfected after each use.

One voter, a young woman, told BBC Seoul correspondent Laura Bicker: “I thought maybe the election should be postponed because people wouldn’t turn up. But now that I’m here and see so many others, I’m not worried.”

There are currently about 60,000 people in quarantine due to the coronavirus in South Korea.

Despite this, the overall turnout was more than 66%, the highest in 18 years, aided by the fact it was first time that 18 year olds were allowed to vote.

About 26% of the population cast their votes in advance, either by post or in early polling stations set up in quarantine stations on Friday and Saturday.

People who had tested positive for coronavirus were under strict instructions to only vote at certain times and at specially designated polling stations. They were also forbidden from using public transport and were only allowed to walk or take their own car.

“Everyone recognised the seriousness of the situation and showed mature citizenship by encouraging electoral officials rather than complaining,” the mayor of Seoul’s Yongsan district, Sung Jang-hyun, told the BBC.

South Korea briefly had the world’s second-largest outbreak of coronavirus but it was largely brought under control through a policy of widespread testing, thorough contact-tracing, and widely observed social distancing.

South Korea has never postponed an election including the presidential election of 1952, which went ahead despite the country being in the middle of the Korean War.