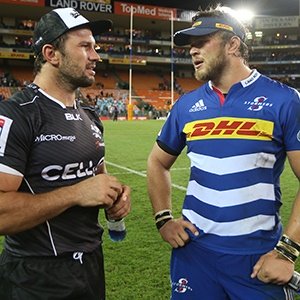 The future of Super Rugby 2020 appears bleak as with each passing week it’s less likely sides will get back on the park this year.

The impact of the coronavirus has been felt all over the world, and rugby has not been spared.

A look at the 2020 fixture list reveals that, this Saturday, the Stormers were due to host the Sharks at Newlands in a local derby that is rich in history.

It promised to be an intriguing clash, with both franchises having been very much in the playoff race, with the Sharks top of the combined log before the season was suspended after Round 7 and the Stormers in seventh.

With that in mind, the Sport24 team thought this an ideal time to list an all-time best XV for both franchises.

Remember, this is based on their Super Rugby history!

In this game of ‘selector’, Herman Mostert picked a Stormers side, while Lloyd Burnard named a Sharks line-up.

Who do you think would’ve won this match?

15 – A star from the early days of the ‘Men in Black’ era which started in 1999, Percy Montgomery stood out with his prodigious boot. Those were the days when rugby players still kicked ‘torpedoes’ (kicking a ball with a spiral, giving it considerably more distance) and there was no better exponent of this than “Monty”. The 102-Test Springbok also had a penchant for scoring tries.

14 – A terrific finisher with pace to burn, Springbok star Breyton Paulse also punched well above his weight on the defensive front. He was also one of the best tactical kickers from the right wing position.

13 – One of the best centres ever produced by South Africa, Jaque Fourie was instrumental for the Stormers in their run to the 2010 final. Fourie’s organisation on defence and eye for a gap made him one of the leading outside centres in the world rugby.

12 – It’s pretty tough not to find a spot for former Springbok legend Jean de Villiers. The former Bok skipper was deceptively quick in his younger days, was a great distributor and always kept the opposition on their toes with his unpredictability and opportunism. He will captain the side.

11 – Talking about opportunism, not many were better than Pieter ‘Slaptjips’ Rossouw, but it’s hard not to select try-scoring machine and Springbok legend Bryan Habana. Habana arguably had more success in a Bulls jersey but after initially struggling for form in the Cape he eventually found his mojo.

10 – Peter Grant was probably the best defender in South Africa from the pivot position since the days of Henry Honiball. Grant’s overall game management and calm demeanour makes him the standout Stormers No 10 of the past 20-odd years.

9 – One of the best passers of a rugby ball I’ve ever witnessed, the quickfire Neil de Kock perhaps never got his due credit in South Africa. Still did well to play 10 Tests in the era of Joost van der Westhuizen before heading off to Saracens in England where he played over 200 games…

8 – Hard-as-nails Duane Vermeulen made a profound impact on the Stormers when he arrived from the Cheetahs in 2009. Was another stalwart of the 2010 runner-up outfit and became one of the world’s leading No 8s while plying his trade in Cape Town.

7 – No other player has had such a profound impact on a union as when Bobby Skinstad rose to prominence in the late 1990s. He simply had to crack the nod in this line-up, despite featuring more at eighthman for the Stormers. Skinstad was the “face” of the Stormers in the ‘Men in Black’ era and that 1999 season will always stand out in memory. He was immensely skilful and in his prime a world great.

6 – Schalk Burger. An all-time Stormers legend and one of the hard men who put his body on the line for province and country.

5 – The 2.08m frame of lineout lynchpin Andries Bekker is tough to leave out, but it would be daft not to find a spot for 2019 World Rugby Player of the Year Pieter-Steph du Toit. Du Toit’s versatility, he can slot in at either lock or flank, counts in his favour in this regard.

4 – One of the hard men of South African rugby, Eben Etzebeth’s physicality was just what the Stormers needed when he burst onto the scene in the early part of the last decade. The World Cup winner go down as a Stormers and Western Province legend.

3 – A technically great scrummager, burly Springbok tighthead Cobus Visagie was the anchor of the Stormers scrum in the late 1990s and early 2000s.

2 – Bongi Mbonambi arrived at the Stormers from the Bulls in 2015 as a relative unknown, but his progress since then has been staggering to say the least. It takes something to keep Malcolm Marx out of the Springbok starting XV…

1 – World Cup winner Steven Kitshoff will go down as one of the best looseheads produced by South Africa and he had already made his presence known as a teenager when he made his Super Rugby debut in 2011. He destroyed the notion that props only start maturing in their late 20s and early 30s…

15 – The ‘Rolls Royce’ of fullbacks, Andre Joubert, walks into this side. He remains one of the classiest fullbacks, all these years later, that South African rugby has ever produced and he was part of the Sharks side that lost the 1996 final to the Auckland Blues.

14 – James Small and Odwa Ndungane deserve mentions, but JP Pietersen cracks the nod here. He did move over to No 13 towards the end of his career, but during his prime – at the Boks and the Sharks – he was one of the most clinical finishers in the local game and ended up spending 12 years in Durban.

13 – A World Cup winner and captain of the current Sharks crop, Lukhanyo Am has developed into one of the best in the business. His defence is rock-solid and his running lines and distribution have become added hallmarks. Arrived in Durban in 2016 and hasn’t looked back since.

12 – Frans Steyn played all over the Sharks backline during his seven Super Rugby seasons in Durban, but I’ve cheekily slotted him in at inside centre. Just a superb professional with a natural ability from the very beginning that was nurtured into pedigree. Winner of two World Cups – no other Shark can say that.

11 – How do you separate Ndungane and Lwazi Mvovo? Both have contributed so much to the Sharks in careers that spanned well over a decade. In the end, personal preference sees Mvovo squeeze in ahead given his strength under the high ball and the fact that he edges Ndungane in terms of Super Rugby tries scored.

10 – This is a debate that could go on for a while: Butch James v Pat Lambie v Henry Honiball. James, a World Cup winner, contested two Super Rugby finals and thus cracks the nod. He was often simple in approach, but could show deft touches with his hands and feet and backed that up with a defence that evolved from reckless to robust.

9 – Perhaps never reached his full potential given that he shifted positions so much, but Ruan Pienaar’s six Super Rugby seasons in Durban were impactful. Played at No 9 in the 2007 final against the Bulls and was a member of the Springbok World Cup-winning squad that year too. Rory Kockott is another quality option.

8 – One of the most popular Sharks of all time, Gary Teichmann captains this side if only to satisfy the masses! Many critics feel Teichmann deserved more from his Springbok career after he was controversially dropped ahead of the 1999 World Cup, but under his leadership the Sharks made three successive semi-finals between 1996 and 1998 in Super Rugby and the final in 1996.

7 – In his prime, Willem Alberts was a Shark. The ‘bone collector’ was massive in size and a physical weapon on defence and attack, but his work over the ball added immense value to his already strong game. A Springbok regular throughout his time at Kings Park.

6 – Wayne Fyvie is another fan favourite in KZN, but this one goes to one of the most undervalued loose forwards South Africa has ever produced, Jacques Botes. Never capped at Test level, Botes spent a decade at the Sharks and notched up 115 Super Rugby caps along the way.

5- Hard to pick anyone other than Mark Andrews here. He made the No 5 jumper his own in Durban and was a towering presence at the lineout. Won the 1995 World Cup with the Boks and played Super Rugby for the Sharks for another seven seasons after that.

4 – Often employed as a ‘supersub’, it is hard to think of any lock forward who had the impact Albert van den Berg did at the Sharks. Naturally a No 5 like Andrews, I’ve bent the rules a little to accommodate the lanky Bok here. Known for a surprising burst of pace with ball in hand, his lineout prowess was what saw him come so highly rated.

3 – Jannie du Plessis spent eight Super Rugby seasons at the Sharks and was a Springbok throughout. Considered one of the best tightheads the country has ever produced, he is a natural fit in this legend XV.

2 – Potentially contentious given that John Smit misses out, but on ability alone it is impossible to overlook Bismarck du Plessis. Just a special rugby player with unreal physicality. Would have walked into most Test sides during his prime, and the Sharks were lucky enough to benefit from his services for over a decade.

1 – Surely the easiest selection in this side, Tendai Mtawarira is a Sharks and Springbok legend. Never represented another union in South Africa and, last year, brought the curtain down on a 14-year stay at Kings Park. One of the greats.