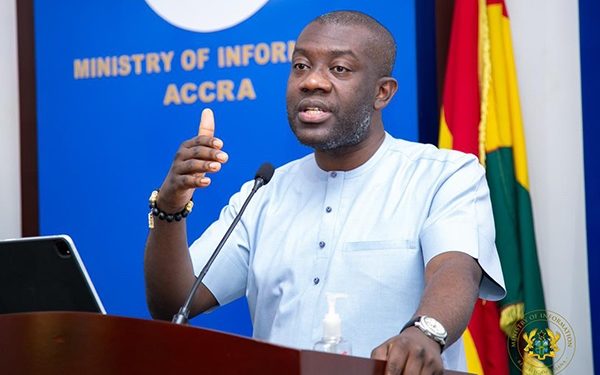 304
SHARES
1.7k
VIEWS
Share on FacebookShare on TwitterShare on WhatsApp

Before election 2020 when former President Mahama made a passionate appeal for Akufo Addo and all other stakeholders to consider reviewing the free SHS and other policies of Government which were being implemented haphazardly, the Government sponsored dozens of Ads to suggest Mahama said he was going to cancel free Shs.

Fast forward in 2022, the Ghana Economy has collapsed under the watch of the septuagenarian Akufo Addo and his nodding and ridiculous smiling Vice President Bawumia.

All 16 flagship programs of the government including the Free Senior High School are up for review.

This is according to Information Minister, Kojo Oppong Nkrumah.

This is one of the many decisions taken at a 3-day crunch cabinet meeting, held at Peduase Lodge to proffer solutions to the economic hardships in the country.

The Ghana Cedi has experienced a sharp depreciation trading over 8 cedis to a dollar.

Fuel prices have also shot up to over 10 cedis for a litre affecting transport fares and the cost of general goods and services.

Analysts as well as the opposition NDC, have urged the government to review the Free SHS program and take expenditure cuts among others to save the country money.

In an interview with Bernard Avle, Kojo Oppong Nkrumah, said no program will be left out of the review.

However, he wants it done within the constraints of item number 2 which is the fiscal framework we are working with. If based on the caps that we are working with we will have to rescope a particular flagship program, we will do it and see how much we can achieve.”

“All the 16 are up for discussion, none is off-limit. Only that the President has laid down the red line that we will not compromise on the fiscal consolidation agenda because our real problem over the years has been a year-on-year deficit going out of hand.”

According to the Ministry of Information in a statement issued on Monday, March 21, 2022, the Minister of Finance, Ken Ofori-Atta, will later this week brief Ghanaians on measures the government seeks to implement to address current economic challenges.

It also disclosed that President Nana Addo Dankwa Akufo-Addo has approved a number of “far-reaching measures” aimed at mitigating the depreciation of the Cedi, ensuring expenditure discipline, and providing relief in the face of global fuel price hikes and inflation as well as ensuring that priority programs meant to grow the economy are protected.

“The Finance Minister, Ken Ofori-Atta will later this week provide the details of measures after consultations with key social and economic stakeholders.”

“Government appreciates the efforts of all who contributed to a successful retreat and looks forward to the support of all Ghanaians in implementing the agreed measures.”

NDC influencing Minority not to Cooperate With Us- Afenyo Markin

NDC influencing Minority not to Cooperate With Us- Afenyo Markin