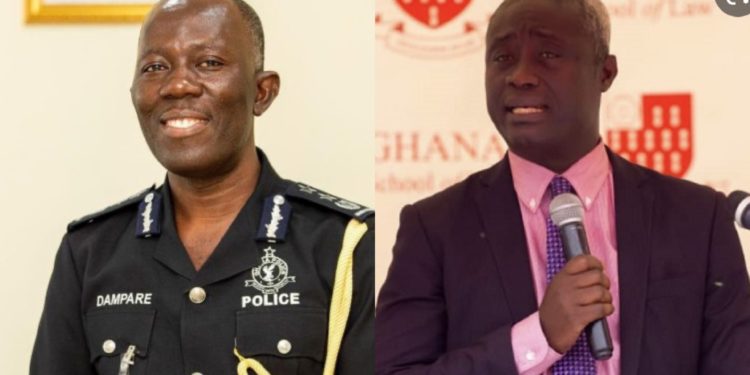 181
SHARES
1k
VIEWS
Share on FacebookShare on TwitterShare on WhatsApp

The Inspector General of Police (IGP), Dr George Akuffo Dampare, has been petitioned to arrest and put before the court, the former Acting Director of the Ghana School of Law for fraud and forgery of the school’s official documents.

The petitioner, Korsi Senyo, says the former Director and two other senior officers who’re still at post, were found guilty of illegally admitting 10 unqualified students into the Ghana School of Law for the 2021/2022 academic year.

A report by a committee of inquiry set up by the General Legal Council (GLC) established that 10 students were illegally admitted into the Ghana School of Law.

The Committee also recommended the withdrawal of the said students from the school.

Admission into the only school running the professional law programme remains a contentious matter as every year, thousands of students fail the entrance examination.

“Sir, the conduct of Mr Maxwell Opoku-Agyemang and his accomplices as found by the GLC borders not only on illegality but also a possible case of fraud, forgery of official documents and corruption by public officeholders.

Accordingly, I write on behalf of the millions of concerned Ghanaians to request your high office to immediately arrest, investigate and possibly prosecute Mr Maxwell Opoku-Agyemang and his two accomplices to serve as a deterrent to other public office holders.”

Korsi Senyo also petitioned the Commission on Human Rights and Administrative Justice and the Chief Justice.

In the petition to the Chief Justice, who is also the chairman of the General Legal Council, the petitioner wants the three persons removed from the roll of lawyers.

Under Section 16A of Act 32, the Council is empowered to remove a lawyer from the roll without holding a disciplinary enquiry. It provides as follows: