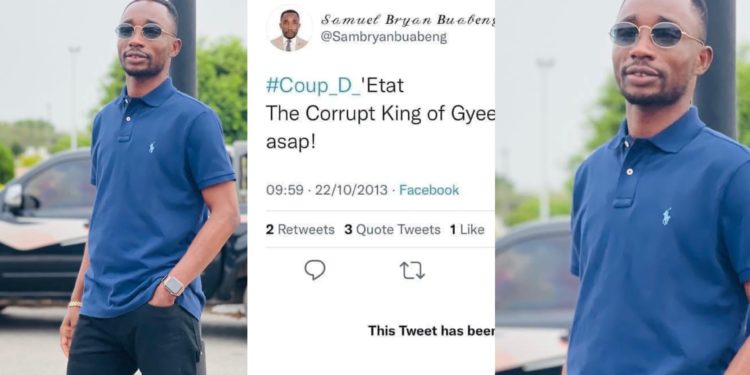 485
SHARES
2.7k
VIEWS
Share on FacebookShare on TwitterShare on WhatsApp

In the last 48 hours convener for sociopolitical group Fix The country was arrested at Kotoka International Airport for some post he made on Facebook about the government and the impasses around the e-levy.

The NPP paid actors on social media has since taken delight in the arrest calling for more persons critical of the government to be arrested aside dozens of journalists being persecuted for speaking the truth.

Combing through the archives, a young man known on social media as Samuel Bryan Buabeng has been exposed as someone who said worst stuff when Akufo Addo was in opposition but got away with it.

Samuel Buabeng who has since 2017 being awarded and rewarded as a Presidential staffer at a point called for former EC Boss Acari Gyan to be hanged.

He called for a Coup D’etat and make equally dangerous pronouncement which could have triggered National crisis.

He is a boy close to Akufo Addo the President today and was among the young boys recruited by Akufo Addo at his time in opposition to pass some of these dangerous comments they are afraid of today.

A quick search of some of his tweets are captured below.