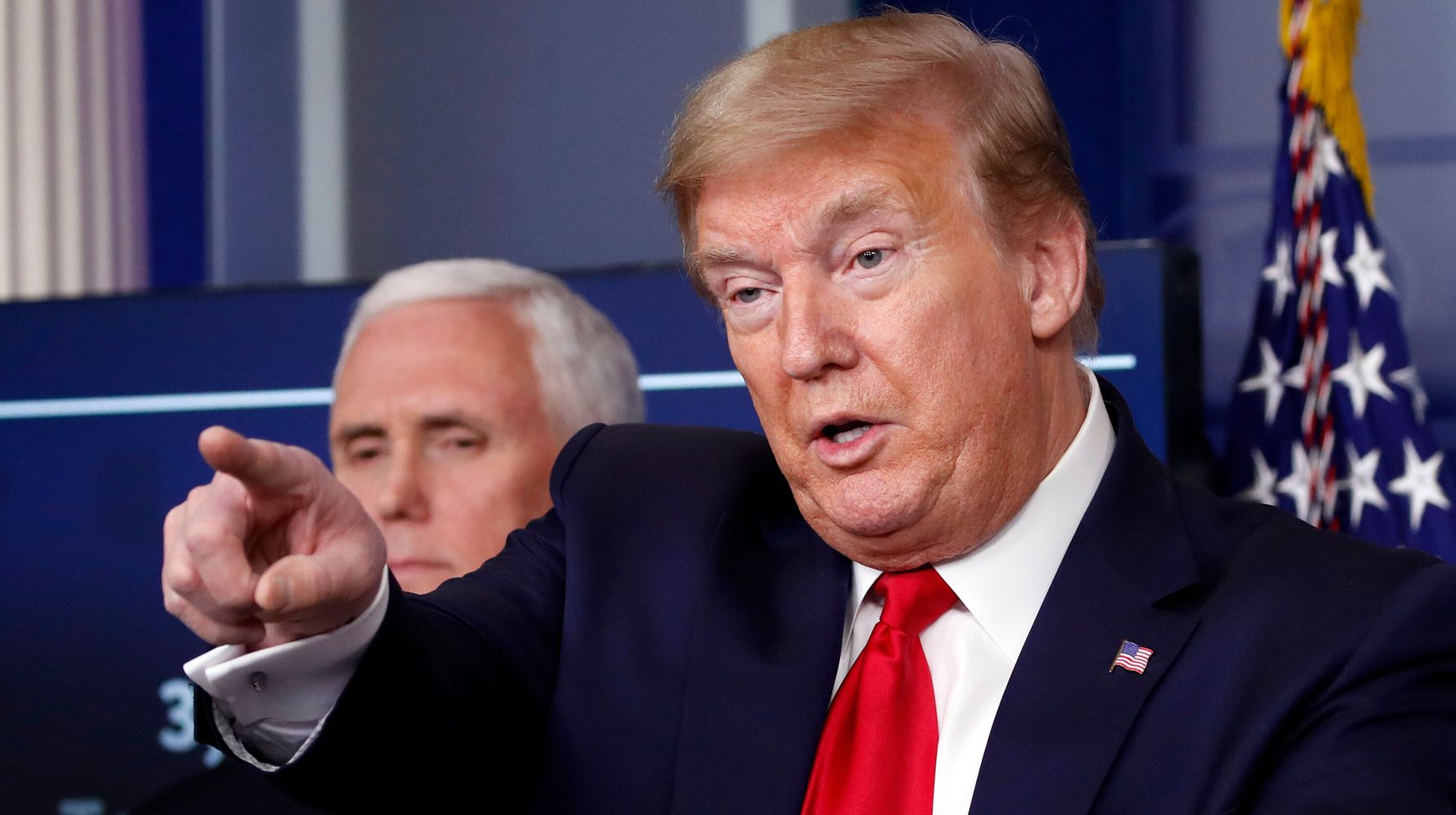 NEW YORK (Reuters) – The U.S. coronavirus crisis took a sharp political turn on Friday as President Donald Trump lashed out at four Democratic governors over their handling of the pandemic after having conceded that states bear ultimate control of restrictions to contain the outbreak.

Amplifying a theme that his supporters have trumpeted this week in street protests at the state capitals of Lansing, St. Paul, and Richmond, Trump issued a series of matching Twitter posts touting the slogans: “LIBERATE MICHIGAN!” “LIBERATE MINNESOTA!” and “LIBERATE VIRGINIA!”

LIBERATE VIRGINIA, and save your great 2nd Amendment. It is under siege!

Michigan has become a particular focus of agitation to relax social-distancing rules that rank among the strictest in the nation after Governor Gretchen Whitmer, widely seen as a potential running mate for presumed Democratic presidential candidate Joe Biden, extended them through the end of April.

Protesters defying the restrictions from the steps of the state Capitol on Wednesday shouted “lock her up,” a chant that was a staple of Trump’s campaign rallies and originally referred to his 2016 Democratic rival, Hillary Clinton.

Whitmer said on Friday she was hopeful her state, which suffered one of the country’s fastest-growing coronavirus infection rates, can begin to restart parts of its economy on May 1. But she urged doing so cautiously to avoid reigniting the outbreak just as it was being brought to heel.

Responding to Trump’s critique later in the day, Whitmer said Michigan will re-engage its economy when it’s safe, adding: “The last thing I want to do is to have a second wave here.”

Trump also took renewed aim at one of his favorite political foils, New York Governor Andrew Cuomo, suggesting on Twitter that his state, the U.S. epicenter of the outbreak, had asked for too much assistance that was never fully used.

At his daily news briefing, Cuomo shot back saying Trump should “maybe get up and go to work” instead of watching TV, and accused the president of favoring the airline industry and business cronies in a recent bailout package that left little for the states.

The flare-up in political sparring came as the number of known coronavirus infections in the United States surpassed 700,000, the most of any country. At the same time, the tally of lives lost from COVID-19, the highly contagious lung disease caused by the virus, has soared to more than 35,000. New York state accounts for nearly half those deaths.

While the death toll continued to climb, the rate of hospitalizations and other indicators have been leveling off, a sign that drastic social-distancing restrictions imposed in 42 of the 50 U.S. states were working to curtail the outbreak.

Stay-at-home orders and the closure of non-essential businesses have also strangled U.S. commerce, triggering millions of layoffs and forecasts that America is headed for its deepest recession since the economic collapse of the 1930s.

The result has been mounting pressure to ease the shutdowns, leading to clashes between Trump, who had touted the strength of the U.S. economy as the best case for his re-election in November, and governors in hard-hit states who warned against lifting restrictions too quickly.

Trump, who played down the coronavirus threat in its early stages, had been pressing to restart idled businesses as soon as May 1, at first declaring “total” authority to do so and branding governors who resisted his approach, many of them Democrats, as “mutineers.”

In the end Trump acknowledged it was up to the governors to decide when and how to relax the restrictions they themselves had imposed since last month, presenting new federal guidelines on Thursday as recommendations.

While the guidelines call for a phased-in, science-based strategy in keeping with the advice of leading health experts, the plan hinges on widespread testing to gauge the scope of infections and how many people might have developed immunity to the virus.

At a White House briefing on Friday, Trump’s coronavirus task force members, through statements and graphics, pushed back against criticism from some governors and lawmakers that limited testing ability is impeding the country’s return to normalcy.

“We believe today that we have the capacity in the United States to do a sufficient amount of testing for states to move into phase one in the time and manner that they deem appropriate,” Vice President Mike Pence told reporters.

Cuomo argued earlier that the Trump administration was foisting responsibility for a massive testing program on the states without providing necessary financial resources.

Even as Cuomo was addressing reporters, Trump immediately took to Twitter in Washington to fire back, saying he “should spend more time ‘doing’ and less time ‘complaining.’”

Trump struck a more conciliatory tone during the White House briefing. Asked about criticism leveled at him earlier in the day by Washington state Governor Jay Inslee, a Democrat who accused Trump of “fomenting domestic rebellion” with his “LIBERATE” tweets, the president demurred.

Trump denied he was suggesting that Michigan, Minnesota and Virginia lift their stay-at-home orders altogether, but added, “I think elements of what they’ve done are too much.”

Of the protesters, Trump said, “These are people expressing their views.” He added, “They seem to be very responsible to me. … But they’ve been treated a little bit rough.”

Recovered coronavirus patients are testing positive again. Can you get re-infected?