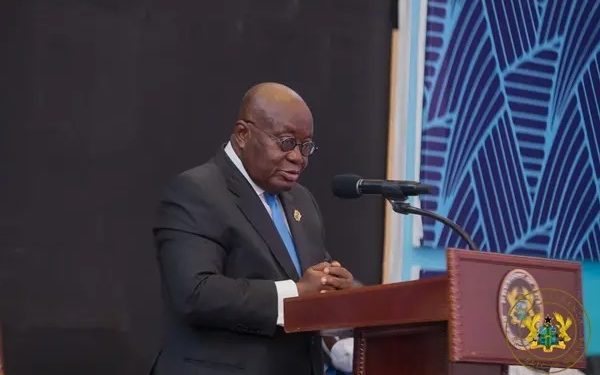 225
SHARES
1.3k
VIEWS
Share on FacebookShare on TwitterShare on WhatsApp

President Nana Addo Dankwa Akufo-Addo has said that his administration is determined to raise the needed revenue, domestically, to embark on development projects.

The President noted that efforts of his administration to raise revenue are being resisted by the opposition party but he is still determined.

President Akufo-Addo said these when addressing traditional leaders from Dzodze in the Volta region on Tuesday, 1st February 2022.

He said “Revenues during 2020/2021 went down considerably because of the slowing down of the economic activities that came from the COVID-19. At the same time, government, in order to keep the country going, did incur some expenditures on the free water, the free electricity.

“These were the unavoidable expenses that government had to make.”

He added “These are the efforts that we are now making which are being resisted by the opposition but we will try and close the gap. That is the reason it has become necessary for us to use these measures like this famous tax which has caused so much unnecessary, in my view disputation; nevertheless, we would continue.”

He stressed “I am determined to persevere to make sure we find the means to address some of these issues.

“These are the efforts that we are now making which have been being resisted by the opposition as we try and close the gap. It is necessary for us to do so because that is the only way which some of these matters can be addressed.

“We ourselves have to find the money for our development and that is the reason why it has become necessary for us to use these measures like this famous tax which has caused so much unnecessary, in my view, disputation; nevertheless, we would continue.”

Meanwhile, a crack team of government officials led by the Minister of Finance, Kenneth Nana Yaw Ofori-Atta, are in Sekondi-Takoradi today Wednesday, February 2, for the second regional townhall meeting on the Electronic Transfer Levy, popularly known as the e-levy.

This episode comes barely a week after a similar meeting was held in Koforidua, precisely on Thursday, January 27.

Wednesday’s event is scheduled to take place at the Sekondi Youth Center.

Both parliamentary representatives of the metropolis, Takoradi’s Kwabenya Otchere Darko-Mensah, who is also the regional minister, and Sekondi’s Andrew Egyapa Mercer, have been billed as speakers at the programme.

The introduction of the policy, which will see taxation of most electronic transactions, has stirred controversy in public discourse and even led to fights in Ghana’s Parliament.

It is still yet to be considered by plenary after being passed under a certificate of urgency by the Kwaku Kwarteng-led Finance Committee.