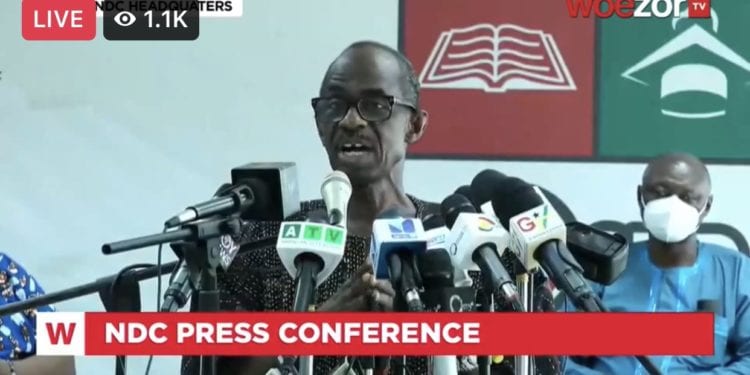 46
SHARES
255
VIEWS
Share on FacebookShare on TwitterShare on WhatsApp

The General secretary of the National Democratic Congress(NDC) has questioned the rationale behind the current Chief Justice Anin Yeboah always reporting Lawyers with affiliation to the Ndc to the General Legal Council.

Speaking at a Press Conference held today 21st June 2021 at the Ndc Party Headquarters in Accra, Mr Nketia said it’s becoming a worry with respect to how “Political” the Chief Justice is conducting himself.

This was in reaction to some actions taken by Justice Anin Yeboah who is the Chief Justice against Dr Dominic Ayine who is a member of the Ndc and member of parliament for Bolgatanga East Constituency in the Upper East Region.

The Chief Justice Anin Yeboah who was not pleased with what Dr Ayine said reported him to the General legal council for punishment.

This however is not the first time Mr Anin Yeboah is taking such action against a lawyer affiliated to the Ndc.

Reacting to this development, Asiedu Nketia age an example of how other lawyers affiliated to the Npp are it questioned even when their actions clearly is an attack on the court.

He gave names like Lawyer Okudzeto who was critical of the Supreme Court ruling in 2021 election petition among other issues.

Mr Nketia said, Ghana’s democracy is under threat should this trend continues because the role of the Judiciary which is being led by Anin Yeboah is an important one.

He edged the Chief Justice Anin Yeboah to act as a professional Chief Justice and leader of the Judiciary at all times and not an “Npp” Chief Justice who will be more particular about sniffing gossips about Ndc affiliated lawyers to victimize them.