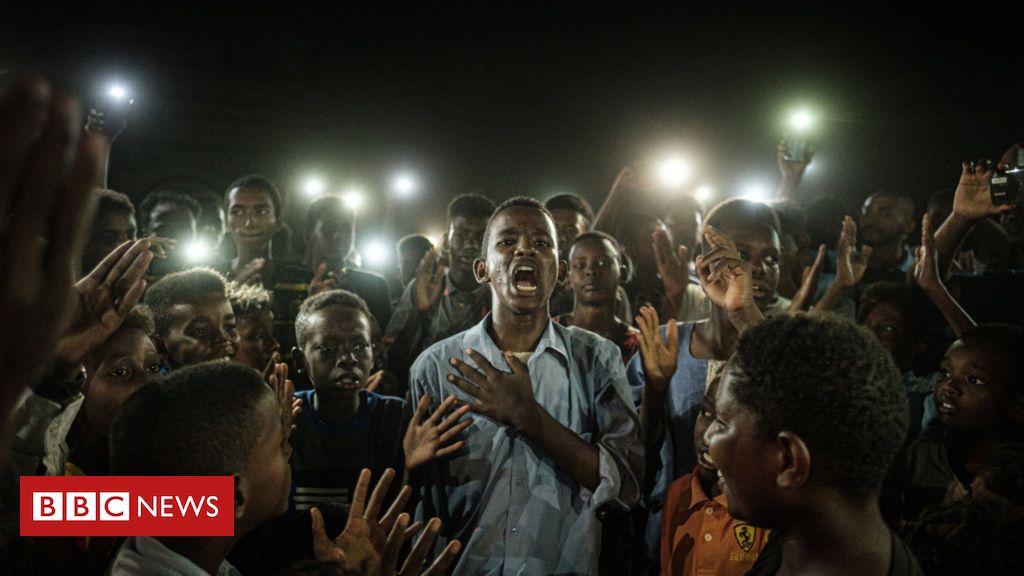 An image from last year’s popular uprising in Sudan has won the prestigious World Press Photo of the Year Award.

It shows a demonstrator reciting protest poetry, while a crowd of fellow protesters illuminate him with the light from their phones.

Longtime ruler Omar al-Bashir was overthrown last April, leading to a violent struggle between the military and the pro-democracy movement.

Discussing the image, Chiba said: “This moment was the only peaceful group protest I encountered during my stay. I felt their undefeated solidarity like burning embers that remain to flare up again.”

Jury chair Lekgetho Makola said that despite being taken during a time of conflict, the photo “inspires people”.

“We see this young person, who is not shooting, who is not throwing a stone, but reciting a poem,” he said. “It’s acknowledging, but also voicing a sense of hope.”

Five other photos were nominated as finalists in the contest.

It was the second crash involving a Boeing 737 Max airliner in just five months. Shortly afterwards, Boeing grounded all of its 737 Max planes, and eventually suspended production of the aircraft.

In this image, Mulugeta Ayene photographed the relative of a victim throwing dirt in her face at the accident site, just days after the crash.

Clash with the Police During an Anti-Government Demonstration, by Farouk Batiche

Algeria was embroiled in protests from February last year – an uprising predominantly led by the country’s younger generation, which led to the ousting of longtime leader Abdelaziz Bouteflika in April.

Mr Bouteflika was an 81-year-old veteran of the Algerian independence struggle, but he was in very poor health and had not been seen in public for a long time.

When he resigned he handed power to a military-backed caretaker government, but protesters continued to call for a return to a civilian democracy, and the departure of the old guard officials associated with the Bouteflika administration.

In this photo by Tomek Kaczor, a 15-year-old Armenian girl called Ewa had just woken from a catatonic state brought on by a condition known as Resignation Syndrome (RS). She was photographed in a refugee reception centre in Podkowa Lesna, Poland, last June.

RS leaves patients immobile, mute, unable to eat and drink and incapable of responding to physical stimulus. It affects traumatised children caught in lengthy asylum processes, and is common in Roma and Yazidi children in particular.

Ewa developed RS while her family were applying for asylum in Sweden. Their application was denied and they were deported to Poland. Eight months later, Ewa recovered.

Ahmed Ibrahim, an 18-year-old fighter with the Syrian Democratic Forces (SDF), was photographed in hospital in Hassakeh on 20 October last year. He had been badly burned in conflict with Turkish forces.

His girlfriend was reluctant at first to enter the room, as she was horrified by his injuries. But after some encouragement from a nurse, she went in, held Ahmed’s hand and had a short conversation with him.

Nothing Personal – the Back Office of War, by Nikita Teryoshin

After a day at the International Defence Exhibition and Conference (Idex) in Abu Dhabi last February, Nikita Teryoshin photographed this businessman locking away a pair of anti-tank grenade launchers.

Idex is one of the biggest arms trade-fairs in the world, and the largest defence exhibition and conference in the Middle East.

Nigerian Who Tested Positive For COVID-19 On The Run | Social

What Can Antibody Testing Really Tell Us About COVID?

What Can Antibody Testing Really Tell Us About COVID?