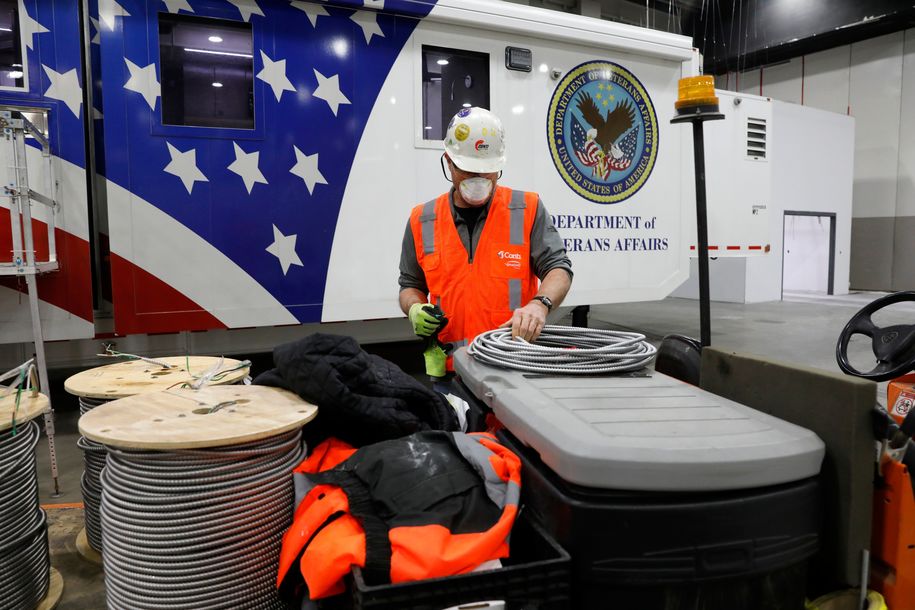 But in the Trump administration, that practice is not something they’ll admit to in public. “VA’s PPE conservation posture is precisely why the department has not encountered any PPE shortages that have negatively impacted patient care or employee safety,” spokeswoman Christina Mandreucci told AP. According to the official line, there are no shortages. According to “nurses and other employees at facilities around the country, internal VA documents, and a March report by the agency’s inspector general,” AP found otherwise.

As staff continues to get ill, the AP found that VA hospitals were lacking both in staff and in equipment “like masks, eye shields, hand sanitizer and gowns.” AP was even told by nurses that the staff “were forced to reuse masks for days or weeks.” Adequate screening processes for visitors coming into the VA facilities were lacking in nearly a third of hospitals, the VA inspector general’s staff—which visited 230 facilities in March—found. More than half of the facilities the inspector general surveyed reported shortages of supplies and equipment.

On April 7 the VA issued guidelines in a memo, which told workers they’d have to ration because of “shortages” and the inability to get “adequate supplies.” This memo, obtained by AP, said “staff working with high-risk elderly or vulnerable patients, such as those in nursing homes or spinal cord facilities, would only get one face mask per work week.” On April 16, after staff rebelled and the VA found some supplies, it revised that guideline to allow staff that work with high-risk older or vulnerable patients to have one mask a day. One. But the patients who are not elderly or vulnerable will be cared for by doctors and nurses wearing days-old masks. Which isn’t good for anybody in the hospitals throughout the whole system.

The Occupational Safety and Health Administration is investigating claims from VA workers that even those who had come into contact with someone suspected of having COVID-19 were required to report to work on orders of VA Secretary Robert Wilkie. They should have been quarantined for 14 days. They’re forced to work because of the staffing crisis, because of how many workers have become ill, and because of the caseload. “Usually the ratio is one nurse to two critical patients. I’m having five critical ICU patients on ventilators,” said Maria Lobifaro, an intensive care nurse in Brooklyn, New York. “This has happened four times in the last week and a half. It’s to the point where [ …] my hands are trembling because of what I’m going to walk into. […] I’ve never seen anything like this.”

Wilkie, like the Trumper he is, refuses to acknowledge the problem. “We have the lowest employee infection rate in the world. It is less than half of 1 percent,” AP quotes him as having told MSNBC Wednesday. But one nurse calls bullshit. Irma Westmoreland, a nurse at the Charlie Norwood VA in Augusta, Georgia, said they’re not getting tested, so who knows what the infection rate is. “We are told if you have symptoms or feel like you have been exposed and you want to be tested unless you are veteran, you can’t be tested,” she told AP. “It’s stressful for the nurses to be in this environment,” she said. “But it’s even more stressful when they don’t have information they need.”

Democratic senators are demanding accountability from the VA, writing to the White House to demand Trump fix the “broken procurement and distribution system developed by this administration,” and assist the VA. The letter to Trump was sent from Sen. Jon Tester of Montana, a ranking member of the Senate Veterans Affairs Committee, and more than a dozen senators, including Sens. Bernie Sanders of Vermont, Elizabeth Warren of Massachusetts, and Kamala Harris of California.