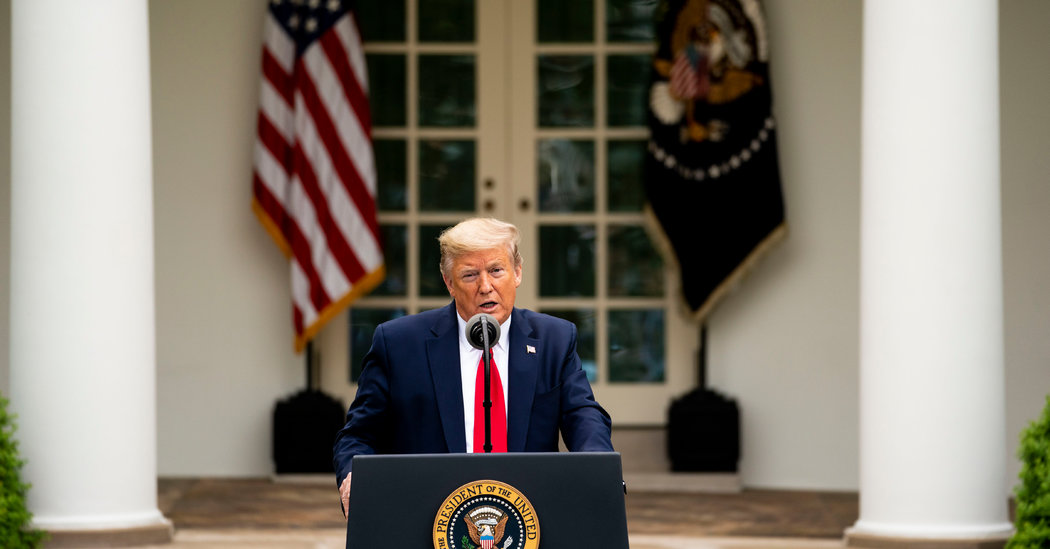 WASHINGTON — The strategy could not be clearer: From the Republican lawmakers blanketing Fox News to new ads from President Trump’s super PAC to the biting criticism on Donald Trump Jr.’s Twitter feed, the G.O.P. is attempting to divert attention from the administration’s heavily criticized response to the coronavirus by pinning the blame on China.

With the death toll from the pandemic already surpassing 34,000 Americans and unemployment soaring to levels not seen since the Great Depression, Republicans increasingly believe that elevating China as an archenemy culpable for the spread of the virus, and harnessing America’s growing animosity toward Beijing, may be the best way to salvage a difficult election.

Republican senators locked in difficult races are preparing commercials condemning China. Conservatives with future presidential ambitions of their own, like Senators Tom Cotton and Josh Hawley, are competing to see who can talk tougher toward the country where the virus first emerged. Party officials are publicly and privately brandishing polling data in hopes Mr. Trump will confront Beijing.

Mr. Trump’s own campaign aides have endorsed the strategy, releasing an attack ad last week depicting Joseph R. Biden Jr., the presumptive Democratic nominee, as soft on China. The ad relied heavily on images of people of Asian descent, including former Gov. Gary Locke of Washington, who is Chinese-American, and it was widely viewed as fanning the flames of xenophobia.

“Trump has always been successful when he’s had a bogeyman and China is the perfect bogeyman,” said Chris LaCivita, a longtime Republican strategist.

But there is a potential impediment to the G.O.P. plan — the leader of the party himself.

Eager to continue trade talks, uneasy about further rattling the markets and hungry to protect his relationship with President Xi Jinping at a moment when the United States is relying on China’s manufacturers for lifesaving medical supplies, Mr. Trump has repeatedly muddied Republican efforts to fault China.

Even as the president tries to rebut criticism of his slow response to the outbreak by highlighting his January travel restrictions on China, he has repeatedly called Mr. Xi a friend and said “we are dealing in good faith” with the repressive government. He also dropped his periodic references to the disease as “the China virus” after a telephone call with Mr. Xi.
Yet in private, he has vented about the country. Senator Kevin Cramer of North Dakota said he informed Mr. Trump in a Thursday telephone conversation that the meat processing plant in South Dakota suffering a virus outbreak is owned by a Chinese conglomerate. The president responded, “I’m getting tired of China,” according to Mr. Cramer.

It remains to be seen whether Mr. Trump’s conflicted messaging on China will hurt him with voters, who have repeatedly seen the president argue both sides of issues without suffering the harm that another politician would. And while Mr. Trump’s team knows that his own words will be used against him, they believe they can contrast his history favorably with that of Mr. Biden.

On Tuesday, at his daily briefing, Mr. Trump was candid about the transactional rationale behind his stance toward China. Pressed on how he could criticize the World Health Organization for what he called pushing “China’s misinformation,” after he had also lavished praise on Beijing’s purported transparency, he responded, “Well, I did a trade deal with China, where China is supposed to be spending $250 billion in our country.”

“I’d love to have a good relationship with China,” he added.

On Friday, however, he incorrectly posited that China must have the most deaths from the coronavirus — the United States does — and later said, “I’m not happy with China.”

Despite the president’s diverging public statements, a central pillar of his campaign’s approach is to deflect anger over the human casualties and economic pain of the coronavirus onto an adversary that many Americans already view warily.

The strategy includes efforts to leverage the U.S.-China relationship against Mr. Biden, who Republicans believe is vulnerable because of his comments last year playing down the geopolitical challenge posed by China and the high-paying work that his son, Hunter, has done there.

Mr. Biden, for his part, has criticized Mr. Trump’s warm words for China. On Friday, his campaign released a video assailing the president for not pressing Mr. Xi to let the Centers for Disease Control and Prevention into his country and for being “more worried about protecting his trade deal with China than he was about the virus.”

On a conference call with reporters, Antony J. Blinken, a senior Biden adviser, noted that in January and February “the president praised China and President Xi more than 15 times.” He attributed the flattery to the administration’s not wanting to “risk that China pull back on implementing” the initial trade agreement the two countries signed in January.

Candidates of both parties have targeted China in past campaigns. But with the United States entering a presidential election season as the Wuhan-borne contagion spreads across the country, the rhetoric this time is far more pointed — with concern growing that it will fan xenophobia and discrimination against Asian-Americans.

It is especially striking to see a primarily internationalist Democratic Party and the traditionally business-friendly G.O.P. attempt to portray the other as captive to Beijing — yet that only illustrates the electoral incentives at play.

Mr. Locke, who also served as ambassador to China, said in an interview that there was plainly a “growing anti-China mood in Washington.” He said there would need to be a “post-mortem” on how Beijing handled the coronavirus, but for now argued that Mr. Trump’s own muted concerns about China had helped shield the Chinese government from criticism about its own actions in the early months of the outbreak.

Mr. Trump’s clashing comments on China illustrate not only his unreliability as a political messenger but also his longstanding ambivalence over how to approach the world’s second-largest economy. He ran for president four years ago vowing to get tough with China, but his ambition was not to isolate the Chinese but to work with them — and especially for the United States to make more money from the relationship.

This goal has prompted him to often lavish flattery on Mr. Xi, most memorably when Mr. Trump rhapsodized about the way they bonded over “the most beautiful piece of chocolate cake you’ve ever seen” at his Mar-a-Lago resort in 2017.

The president’s hopes for securing a major trade agreement with China have been reinforced by a coterie of his advisers, including Treasury Secretary Steven Mnuchin, who have often prevailed in internal battles over White House hard-liners.

But with the coronavirus death toll growing and the economy at a standstill, polls show that Americans have never viewed China more negatively

Yet those polling numbers also come as 65 percent of Americans say they believe that Mr. Trump was too late responding to the outbreak, according to a Pew Research Center survey this past week.

More ominous for the president are some private Republican surveys that show him losing ground in key states like Michigan, where one recent poll has him losing by double digits, according to a Republican strategist who has seen it.

So as Mr. Biden unites the Democratic Party, Mr. Trump’s poll numbers are flagging and G.O.P. senators up for re-election find themselves significantly outraised by their Democratic rivals. That has led to a growing urgency in Republican ranks that the president should shelve his hopes for a lucrative rapprochement with China.

“At this moment in time a trade deal is not the right topic of discussion,” said Senator Steve Daines, Republican of Montana, who said the pandemic had highlighted the country’s reliance on China in the same painful fashion that the oil crisis of the 1970s revealed how it was at the mercy of the Middle East. “This has exposed our dependency on China for P.P.E. and for critical drugs.”

Mr. Hawley, a first-term Missouri senator has also denounced China, calling for a United States-led international commission to determine the origin of the virus and demanding that American victims be allowed to sue the Chinese government.

“This is the 9/11 of this generation,” said Mr. Hawley, adding that he hopes Mr. Trump “keeps the pressure high.”

He said Republicans should make the issue central this fall and demonstrate “how are we going to come out of this stronger by actually standing up to the Chinese.”

Few Republicans have been more outspoken than Mr. Cotton, an Arkansan who was warning about the virus at the start of the year when few lawmakers were paying attention, and has been urging Senate candidates to make China a centerpiece of their campaigns.

“China unleashed this pandemic on the world and they should pay the price,” Mr. Cotton said. “Congress and the president should work together to hold China accountable.”

Fortified by private polling his campaign conducted last year for his own re-election showing bipartisan disdain for China, Mr. Cotton’s top aides approached aides to Mr. Trump’s campaign last month and told them they planned to air an ad in Ohio, a few days before its scheduled primary, attacking Mr. Biden over China. But, according to Republicans familiar with the conversation, Mr. Trump’s campaign expressed little interest in coordinating with them.

Now, though, Mr. Trump’s campaign is effectively repurposing Mr. Cotton’s ad and lashing Mr. Biden in a commercial targeting the former vice president and his son.

The super PAC supporting Mr. Trump, America First, is airing ads on the same theme in swing states, showing video of Mr. Biden in 2011 saying that “a rising China is a positive development.”

And the president’s eldest son, Donald Jr., posted the spot on Twitter and sought to stamp a new nickname on the former vice president: “BeijingBiden.”

Brian O. Walsh, the president of America First Action, said the strategy builds on years of voter concerns about China.

“The China piece of this was part of the overall thinking far before coronavirus, because we knew its potency and its relevance,” Mr. Walsh said. “This just made it more potent and more relevant.”

In response to G.O.P. attacks, an outside Democratic group, American Bridge, on Friday unveiled a $15 million ad campaign hammering Mr. Trump for sending medical supplies to China and for initially praising the Chinese response to the virus.

Mr. Cramer, of North Dakota, said Democrats were courting political risk if they were seen as defending China. But he conceded that Mr. Trump’s “rhetoric about Xi gets confusing.”

“I’d have a hard time being that nice to a communist leader,” Mr. Cramer said, “but the president knows he’s got to appeal to an audience of one there.”