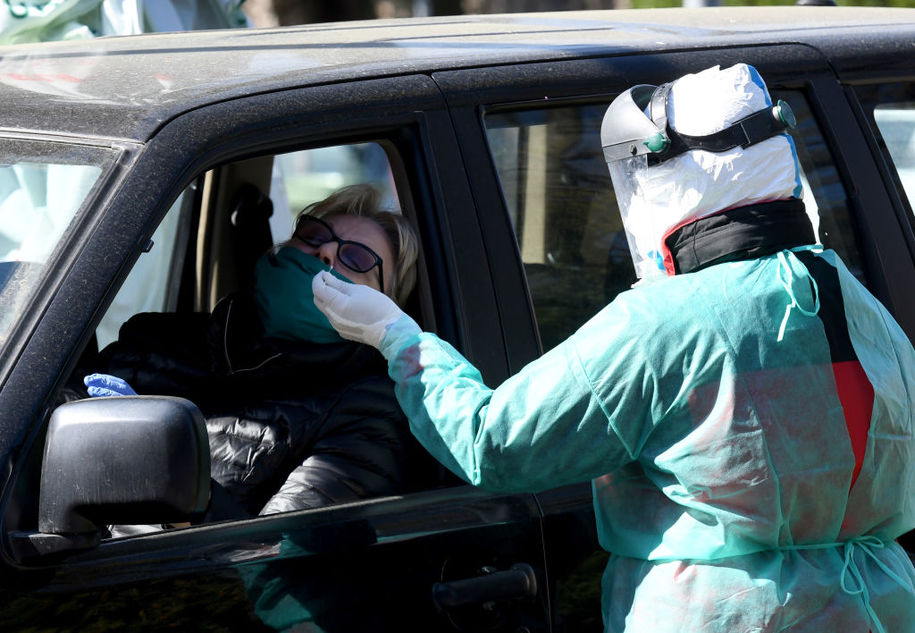 Why Fox News and Republicans are promoting a social distancing backlash

The social distancing backlash is here.

Like many such eruptions of anger, it’s partly genuine and partly fed by political actors with their own preexisting agendas — in this case, mostly to rescue President Trump’s imperiled reelection campaign. And it will get ugly.

On Wednesday in Lansing, Mich., thousands of protesters came to the state capitol to demonstrate against the stay-at-home order issued by Gov. Gretchen Whitmer (D). Though Michigan now has the fourth-highest total of covid-19 cases of any state, with nearly 2,000 deaths, the protesters argued that Whitmer’s order is unnecessary and overly strict….

And once again, the solution being offered will only make things worse. Voting for Trump didn’t help people who live paycheck to paycheck, and defying stay-at-home orders will only give new life to the coronavirus, prolonging the pandemic and making it harder to recover economically.

But if Republicans can convince people that the only way to understand this crisis is through a partisan lens, they can tamp down difficult questions about Trump’s performance and minimize the political damage he’ll suffer, making it possible for him to win in the fall. That’s the goal, one they’re pursuing with all their usual cynicism — even as they fight against Democratic efforts to provide more support to those being hit hardest by the recession.

Could it work? Probably not, but it just might.

I’m in the ‘probably not’ camp. Trump’s track record is too well known, and he continues to do things wrong before the crisis is over.

BREAKING: The proposed guidelines for Ã¢ÂÂopeningÃ¢ÂÂ America have been released.

4: I donÃ¢ÂÂt think this alters anything governors were planning to do.

7. And your state opened & people died. ThatÃ¢ÂÂs on your governor.

And on that WI election:

A key point from Ã¢ÂÂ¦@PollsAndVotesÃ¢ÂÂ© >

Kelly carried suburban Milwaukee counties but by reduced margins from historical norms. Ã¢ÂÂOur suburbs have been deep, deep red,Ã¢ÂÂ Franklin said. Ã¢ÂÂThey still are red, but by a smaller and smaller margin.Ã¢ÂÂ https://t.co/t3vhNpU2SM

An Unprecedented Divide Between Red and Blue America

The pandemic could exacerbate a major Trump-reelection vulnerability: his weakness with urban and suburban voters.

The results in wisconsin this week offered an even more visceral measure of Trump’s continuing risk in major population centers. In the state’s supreme-court election—whose timing was extremely controversial, given the pandemic—the liberal Jill Karofsky decisively ousted the conservative incumbent Daniel Kelly.

Karofsky showed formidable strength across the state’s population centers, even though they are confronting the most serious outbreaks of the disease. Although the number of polling places in Milwaukee was limited to just five, Karofsky amassed a 70,000-vote advantage in that county. She also carried Dane County, which includes the state capital of Madison, by a crushing 62-percentage-point margin. That’s far larger than Hillary Clinton’s advantage there in 2016 (48 points) or the Democrat Tony Evers’s lead in the 2018 governor’s race (51 points).

“Dane County is the fastest-growing county in the state: massive electronic-medical-records [industry], plus biotech—and that’s not even counting the big insurance-industry component, the University of Wisconsin, and state government,” said Charles Franklin, a law and public-policy professor at Marquette University’s law school and the director of its respected public poll. “Not only does [the county] grow, but its turnout rate goes up year after year, and it’s even more Democratic from race to race to race.”

Trump lost the 100 largest US counties by ~15m votes in 16. W #CoronavirusOutbreak hitting many of those counties hardest, he could lose them by more in 20. Maricopa was largest county he won; now he trails by 13. That means he may need even bigger smalltown/rural margins to win https://t.co/wHTY6EZmHi

Poll: Americans are afraid of ending the coronavirus lockdowns too soon

Americans are more worried about their health than their finances, surveys show.

One likely explanation as to why there is such reluctance: Pew found 73 percent of Americans thought the worst was still to come in the coronavirus outbreak, while just 26 percent thought the worst had already happened.

Another piece of the puzzle may come from Gallup, which released its own polling on Thursday with a related finding: More Americans said they were worried about getting sick from Covid-19 than were worried about severe financial hardship because of the economic slowdown.

IÃ¢ÂÂm curious whether the people arguing shutdowns are unnecessary and make no real difference to the spread of coronvarius think that China made a mistake and should not have ordered a shutdown.

The coronavirus fight demands unity. But Republicans just want to own the libs.

The GOP was built to fail on coronavirus.

How did the coronavirus become folded into the culture war in such a harmful way? One of the best explanations I’ve seen comes from David Hopkins, a political scientist at Boston College. The GOP, Hopkins writes on his personal blog, is failing on coronavirus not by accident — but because the party was built in a way that produced failure.

“The contemporary Republican Party has been built to wage ideological and partisan conflict more than to manage the government or solve specific social problems,” Hopkins writes. “So perhaps it shouldn’t be shocking that an array of subjects, from what medical treatment might help COVID patients to how important it is to take measures protecting the lives of the elderly, have been drawn into the perpetual political wars.”

Solving the COVID Crisis Requires Bipartisanship, But the Modern GOP Isn’t Built for It
Republicans need a party-wide reset of priorities. There has seldom been a time in recent political history when daily partisan point-scoring has been rendered more irrelevant. The general election is far enough away that good policy is good politics: the best way for the ruling party to serve its own electoral interests is to work as hard as possible over the next seven months to render COVID manageable and prevent economic freefall. The widespread public confidence that will be necessary for “normal life” to resume simply can’t be jawboned back into existence via daily press conferences, radio broadcasts, or Fox News monologues. If Republicans lose the battle with the coronavirus, they won’t have much of a chance to win the fight against liberalism.

Kamala Harris’ Plan to Save the Election

No one should have ever had to risk her or his life to vote, as Wisconsin residents did last week. Republicans kept the election open against both Democratic Gov. Tony Evers’ wishes and the recommendations of public-health experts. Texas, for now, has avoided that fate. On Wednesday, a state court judge sided against Republican Secretary of State Ken Paxton and with the American Civil Liberties Union, ruling that any registered voter worried about contracting the coronavirus at an in-person voting site would be able to vote by mail.

The uproar over Wisconsin’s primary and the joy emanating from voting-rights advocates over the Texas decision are both signs that the question of how America will vote for a president in November is becoming the urgent priority that it needs to be. In the wake of both, Kamala Harris, a rumored consideration for the vice presidential spot on presumptive Democratic nominee Joe Biden’s ticket, is offering a sweeping new proposal designed to solve this massive problem all at once.

Something very important is happening in Virginia.

The Dem takeover of state government, fueled by anti-Trump fervor, is now allowing for the first big reversal of what the Tea Party wave wrought:

Despite the reports of a few clergy defiantly promising to hold in-person services on Easter weekend amid the growing coronavirus pandemic, the vast majority of Americans say their churches were closed on the most widely attended Sunday of the year, and very few indicated they planned to attend religious services in person. In a survey conducted April 6-11 just before Easter, only 8% of Americans who typically attend religious services at least a few times a year report that the place they primarily attend services was holding in-person gatherings for Easter or other religious occasions.[1]

Undersold (even in Democratic circles): the quality of candidates @SenSchumer has recruited to run for Senate this cycle. One of the most underappreciated things about recruitment is making sure there are enough quality candidates in place for a potential wave. /1