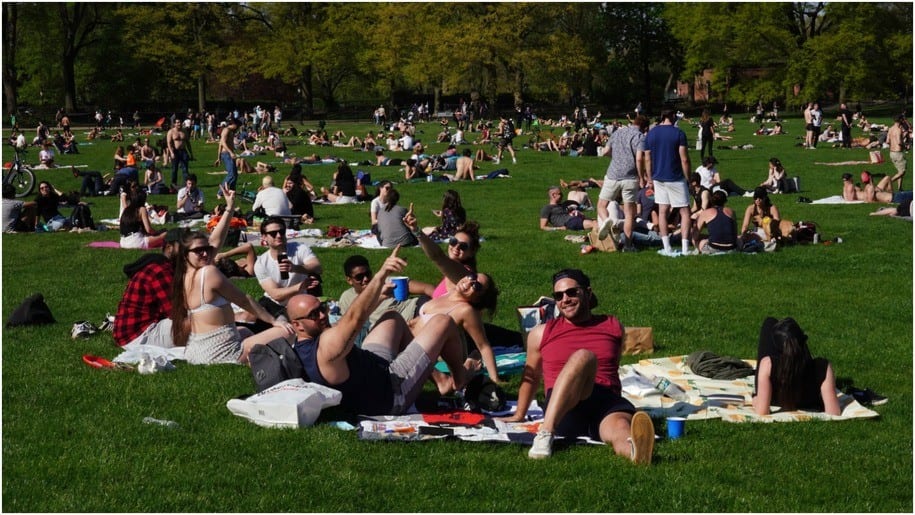 In one Instagram post, the activist who helped lead the 2017 Women’s March showed crowds of white New Yorkers breaking social distancing orders with no officers pictured. In the same post, she included video footage of officers handcuffing a Black man while an onlooker shouted: “He’s talking to you in a calmly manner. Let him go.”

“The footage on both slides is from yesterday in NYC,” Mallory said in the post’s caption. In the footage depicting the unidentified Black man, it’s unclear why authorities were handcuffing the man. Mallory tagged deBlasio for answers and cited his hands-on approach in dealing with an Orthodox Jewish community accused of defying social distancing orders last week. “Did you travel to the side of Brooklyn where Black people live the way you personally went to help disperse the crowd in the Orthodox Jewish community last week,” she asked the mayor. “We deserve the same respect. In case you haven’t noticed, we are human too.”

“Perhaps you should create a ‘task force’ to address the disparate treatment of black folks by the NYPD,” Mallory added. “Where were the cops in this West Village park yesterday? How many were arrested? Punched in the face? Choked? Show us images of police officers sitting on the necks of white folks… WE DESERVE THE SAME RESPECT. We need answers!”

New York is still under Gov. Andrew Cuomo’s stay-at-home order, closing non-essential businesses, prohibiting gatherings, and encouraging people to avoid going outdoors through May 15. “We know the most effective way to reduce the spread of this virus is through social distancing and density reduction measures,” Cuomo said. “I have said from the start that any policy decision we make will be based on the facts, and as we get more facts we will calibrate our response accordingly. This executive order builds on the actions we have taken to reduce the spread of the virus and protect the wellbeing of our friends, colleagues and neighbors.”

Cuomo announced Saturday that 299 people died of the coronavirus Friday, which is up from the 289 deaths reported a day earlier, CBS News reported. More than 24,000 people total had died of the virus statewide by Sunday morning, and there were 318,134 cases, The New York Times reported.

“I believe with the warm weather people will come outside,” Cuomo told the newspaper Saturday. “You can’t stay indoors all the time. People will come outside and that’s great, go for a walk. But respect the social distancing and wear a mask.” The New York City Police Department has reported 60 arrests and 343 summons related to social distancing since March 16, The New York Times reported.

Police Commissioner Dermot Shea told the Orthodox Jewish community after multiple incidents related to breaking social distancing rules: “We will not tolerate it. You are putting my cops’ lives at risk and it’s unacceptable.”

RELATED: De Blasio defends tweets about dispersing funeral for rabbi in Brooklyn: ‘It was tough love’

New York isn’t the only state grappling with how to preserve public health amid pushback from residents. Protests have popped up throughout the country to pressure officials into reopening businesses and public spaces. More than 30 states including Georgia, Tennessee, Texas, and Mississippi have started rolling back stay-at-home orders, CNN reported.

Restrictions, however, remain in place in New York, California, Illinois, and Washington. Ashish Jha, a professor of health policy at the Harvard T.H. Chan School of Public Health, told The Wall Street Journal officials have to weigh the short-term and long-term costs of reopening their states too soon.

“You can open up anytime you want,” Jha said. “The question is, can you stay open? If you open and then have to shut back down at the end of June or July, that’s a mess. If you do that, you’re going to be shut for three months, and then the fall is going to hit.”

Responding to viral video of a house party on Chicago’s West Side, Chicago Mayor Lori Lightfoot threatened citations and possible jail time for those who break the state’s stay-at-home order, according to ABC7. “When you go out and party, when you go home to your momma, your grandma, or anybody in your household who has an underlying medical condition, you are bringing death to their doorstep,” Lightfoot said.

The mayor ended a recent press conference by crossing the street and telling young people outside to go home. When she did, one man reportedly responded: “Y’all need to find a cure, you’re talking about go home. You go home.” Chicago Tribune reporter Gregory Pratt tweeted that the response “highlighted the resistance public officials are facing from some members of the public across the country.”

The young manÃ¢ÂÂs response highlighted the resistance public officials are facing from some members of the public across the country. https://t.co/vjxaObtyqg

All resistance, however, is not created equal, and neither is the official response to that resistance. Black people have long suffered harsher consequences for similar or in many cases, less egregious offenses. So while I would hope all Americans follow social distancing orders to protect their families, I share Mallory’s fear about the fate Black people may suffer for even appearing not to. Going out in public has been dangerous for Black people long before the coronavirus pandemic, and it is even more dangerous now.