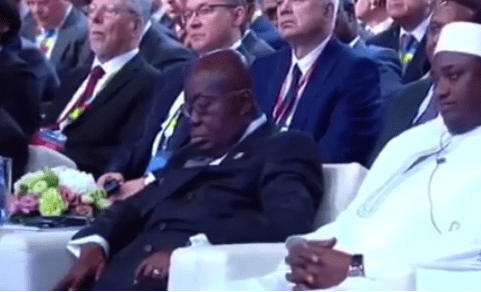 64
SHARES
353
VIEWS
Share on FacebookShare on TwitterShare on WhatsApp

Shocking figures of how much President Akufo Addo spent on a rented private jet to France has taken over social media.

Exposing how wasteful the President is, MP for North Tongu; Samuel Okudzeto Ablakwa Revealed via a Facebook post that the President of Ghana, Nana Addo Danquah Akufo Addo spent almost 3 million cedis on just flight alone to attend a conference in France meant to discuss economic issues in Africa.

In a post which has since gone viral, Honorable Ablakwa gave a breakdown of how much the Airbus plane Akufo Addo rented cost per hour.

Interestingly, Ghana has a presidential jet which has been abandoned by this President for reasons best known to him alone.

He was captured on video sleeping at the conference which made Ghanaians to question if it’s even worth it to spend that much on a trip.

In this conference, the President went for yet another loan of 170 million Euro to set up a development bank in Ghana when the worth of the banks he collapsed was worth more than 170 million Euro

He was begging the western countries to forgive Africa debt meanwhile he was blowing millions of dollars away on his travel expenses.