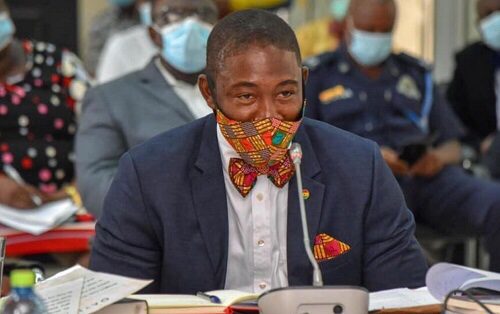 99
SHARES
552
VIEWS
Share on FacebookShare on TwitterShare on WhatsApp

Former Member of Parliament for Ledzokuku Constituency, Dr Bernard Oko-Boye, has said President Akufo-Addo did not fault when he said he did not promise a harbour in Cape Coast.

According to him, even though Bawumia spoke for the party and reports to the president, Akufo-Addo did not vocally say he will build a harbour in Cape Coast so he is right to have denied it.

” … Yes it’s been captured in our manifesto so if anybody says we must own it, yes I agree but if Akufo-Addo tells you, I President Akufo-Addo has not vocalized or said it anywhere that he will build a harbour, he is in his right because he’s also not said it. There is going to be a construction of the landing site.”

He said it would have been a different case should Bawumia had said he did not promise to build a harbour in Cape Coast during the interview instead of Akufo-Addo.

“It’s deliberately orchestrated by people to create an impression there is confusion. The president said I never promised to refer to his person. As in, he never stood anywhere to say I will build a harbour. I’m talking about Akufo-Addo then someone says that but Bawumia said it. Yes it’s true Bawumia said it, but if you had interviewed Bawumia he wouldn’t say I never said it,” He said on TV3’s Big Issues.

He said even though he can contend the fact that it was contained in the party’s manifesto that they will build a harbour in Cape Coast, he believes there was a mistake in capturing of Harbour instead of the landing beach.

“…It is really unrealistic to have the kind of harbour we have in Takoradi in Cape Coast. Anything you do to help the fisher folks will amount to the landing beach. We will not say it’s zero in Cape Coast, we are still committed to having a structure on the coast which is a landing beach as for that one the president reaffirmed. I can’t contend you if you say what in the manifesto is not the same. I don’t believe that the president deliberately will tell you I want to build a habour so your expectation goes high and we really know that it’s a landing beach I don’t believe that is the case. If there is anything I think we were not careful with the capturing,” He concluded.

There have been mixed reactions by Ghanaians after the president said he never promised to build a harbour in the region but he is committed to constructing a landing beach.

Vice President, Dr. Mahamudu Bawumia, who was addressing the party members in August 2020 said they will establish an airport, harbour to boost tourism and economic activities.

“We will accelerate our investments in roads, railways, and ports. And for the people of Cape Coast, I have good news for you. We are building a new harbour in Cape Coast and a new airport in Cape Coast. It is very critical that we do that.

“An airport makes a lot of sense in Cape Coast. It’s a real tourism hub. Between Greater Accra and Kumasi and Cape Coast, you have a triangle that is really a hub of economic activities. It is a major growth pole If we put an airport there to drive infrastructural growth”, he promised while reading excerpts of the manifesto.

Ghanaians have been left in shock after Akufo-Addo said his government never pledged to build a harbour during his tour in the region on Monday, October 18.