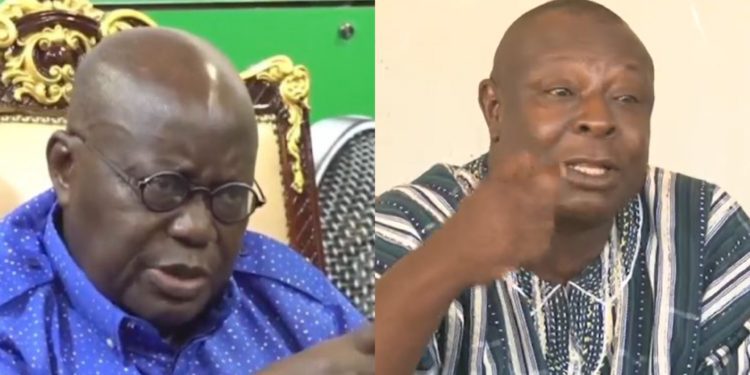 327
SHARES
1.8k
VIEWS
Share on FacebookShare on TwitterShare on WhatsApp

Reckless Akufo Addo has sent an insulting message to the chief of Aflao for asking the government to complete an abandoned E-Block in his area.

The E-block projects started by the Mahama administration was a conscious move to make Secondary Education Progressively Free by making access a universal one.

Unfortunately, since Mahama left office in 2016, most of the almost completed school blocks have been left to waste away by the Akufo Addo Bawumia led Government.

The Chief of Aflao in the Ketu South Constituency Torgbui Adzonugaga Amenya Fiti speaking with the Minority side of the Education Committee who toured the uncompleted school buildings in the Ketu South constituency says, government’s approach to education is appalling.

“After senior high school education, the next degree that my people have to do is to go to border and go and do kayayo, no school.

“The only school that we have is the RC Senior High School that belongs to the Catholic Mission Minor Seminary. So this thick population have no place to go and people sit down in that big hall called parliament and not thinking about Aflao, a place after the Tema Harbour , the next revenue generation  is from the Aflao border.

“I had to push the former President Mahama for the structure to be constructed over there. I had to be running from here to Accra begging. Should we beg for education?”

Granting an interview on Peace Fm, Akufo Addo sent a direct response to the chief of Aflao saying he can go to hell as he cannot dictate the pace of his government.

The host of the show Kwame Sefa Kaye asked Mr Akufo-Addo: “Nana, the Paramount Chief of Aflao has given an ultimatum to government regarding uncompleted infrastructure projects in his area.

Akufo-Addo angrily replied, “Is he the one to give government ultimatum? Then he (the Paramount Chief of Aflao) should go and do it himself?”