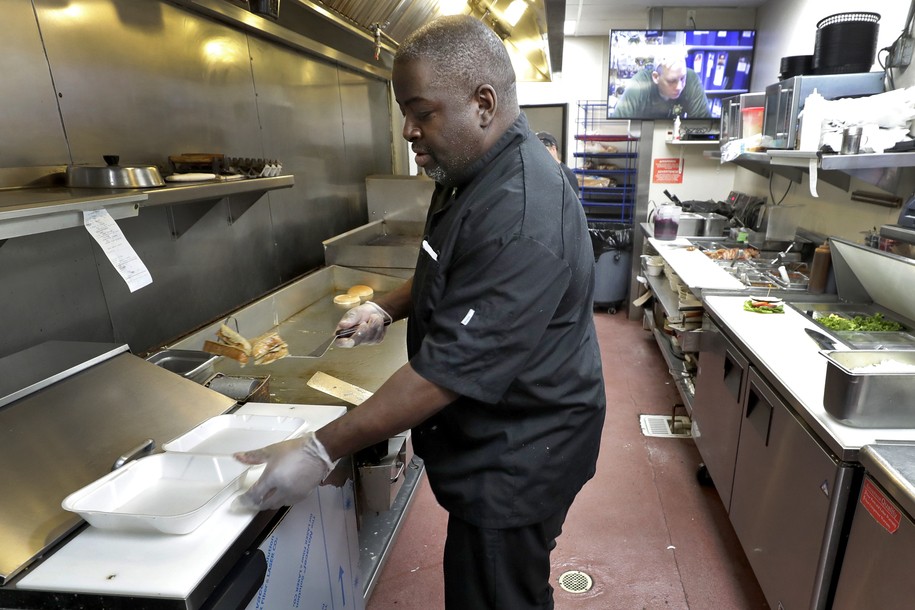 Business owners of color were already at a massive disadvantage going into this pandemic. While Blacks made up 12.7% of the population, they owned just 4.3% of the nations’ businesses, according to the 2012 census of business owners. Latino and Hispanic Americans account for 16.4% of the population, but 12% of businesses. And just 1%—ONE PERCENT—of Black business owners were able to get a loan to start their business, compared to 7% of white applicants. That means to start their businesses, people of color have to go deep into personal debt, just like Brown did to start his print shop, with a home equity loan that put them in danger of foreclosure and his wife’s retirement fund tapped out and credit ruined. Which makes them even less bankable.

The CARES Act, the whopping $2.2 trillion Phase 3 of coronavirus stimulus, allocated just $10 million to the Minority Business Development Agency (MBDA) within the Department of Commerce. It’s the only federal agency “dedicated to the growth and global competitiveness of U.S. minority-owned businesses. Our programs and services better equip minority-owned firms to create jobs, build scale and capacity, increase revenues and expand regionally, nationally and internationally.” That $10 million coronavirus emergency money isn’t going to do all that.

Vogt cites a New York Fed study that classified about 75% of white-owned business as “healthy” or “stable,” but only 43% of Black-owned business were deemed healthy. “From the moment W.E.B. DuBois started collecting data through today, most black businesses are tiny—’pebbles on the shore of business enterprise,’ he called them,” UC Irvine professor of law Mehrsa Baradaran told Vogt. “They’re undercapitalized and highly vulnerable to any dip or sway in the economy.”

That’s just emphasized with these emergency SBA loans. The big companies with accountants and lawyers and personal relationships with bankers were already in line, poised to get their money before CARES was even signed by Trump. People like Brown were lucky if their banks even called them back. One reason is that banks get bigger fees for bigger loans, so not only do they have the personal relationships with big business owners, they have incentive to put them first in line.

This is all the legacy of decade upon decade of policy decisions—from the exclusion of Blacks from the GI Bill and Federal Housing Administration loans—to how this loan program was structured. It was written for “big” small businesses, the ones with dozens of employees instead of several, like Brown’s. The loans can be forgiven if employers retain or rehire employees for 8 weeks, and only about 25% can go to things like keep up rent and utility payments. More employees, more loan money even though the overhead of rent and other non-payroll costs can be as high with four employees as with a dozen or more. Another issue is that the loans will have to be repaid after two years, which puts these business owners in more of a bind—even more debt to be dealt with down the line.

Democrats went into the second round of PPP funding, the Phase 3.5 bill that passed Thursday, wanting to make a dent in this inequity. They wanted $125 billion of the $350 billion in PPP supplemental funds set aside for small and mid-sized banks operating in underbanked areas, hoping to get more funds to these communities. They ended up with just $60 billion earmarked for them and none of the policy changes they wanted to make sure “all eligible small businesses can access this critical funding and are not turned away by banks” rejected. This second round of PPP funding isn’t likely to help much.

Bharat Ramamurti, the former staffer for Sen. Elizabeth Warren who Sen. Chuck Schumer appointed to serve on the Congressional Oversight Commission, has some ideas to help. This commission is one of the layers of oversight Democrats built into the CARES Act. He wants banks to receive a simple flat fee for writing each of these loans, so that they’re not incentivized to write the biggest loans. He also wants to create independent clearinghouses that connect all applicants with banks to establish a more level entry point that will give smaller, less-connected business owners access.

That could be written into a CARES 2, the next big stimulus bill House Speaker Nancy Pelosi is promising, to make sure it happens. It could also change the rules retroactively as to how the loan funds can be used, to make sure these businesses have a shot at survival. The reality is, the employees of these business are probably better off with the enhanced unemployment payments they can receive, if it means there’s a shot that their employer can keep their business alive and rehire them. CARES 2 should also include a moratorium on debt collection—all debt collection—to keep everyone afloat.

“Coronavirus is clearly not racist: It’s a big, dumb virus that we’re all susceptible to,” Amanda Fischer, the policy director for the Washington Center for Equitable Growth, told Vogt. “But any colorblind policy, whether one that deals with public health or access to credit, is going to be unfair to black communities.” It’s not too late to avoid that, but it’s going to mean we fight like hell to make it happen.