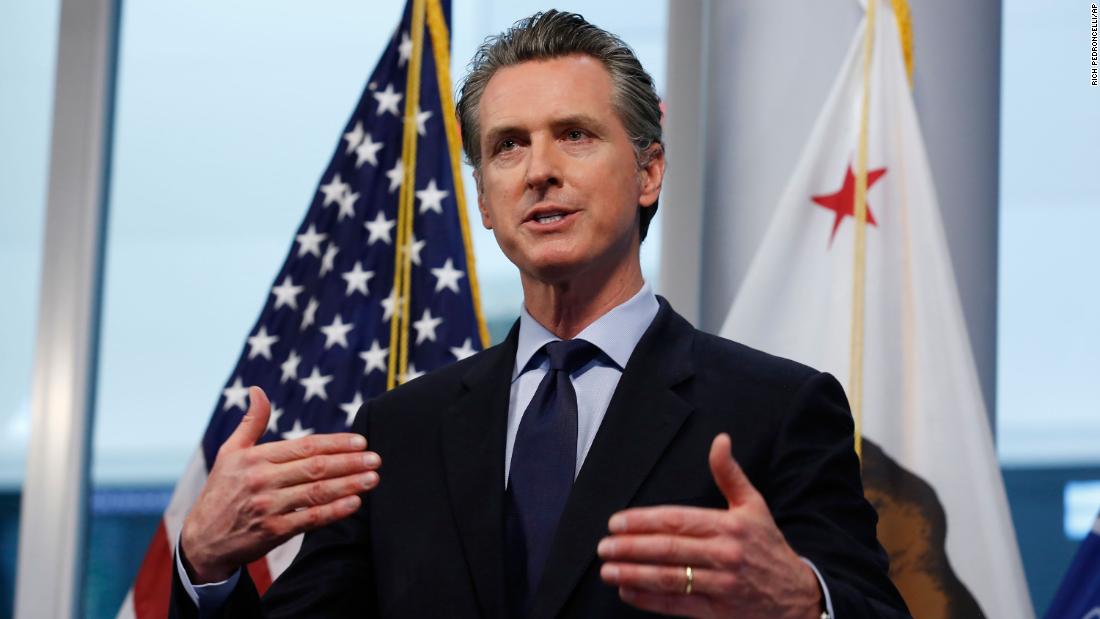 The Democrat did not give a date that the current state-at-home order would end. It currently extends through May 3 statewide, and longer in places like Los Angeles, which has a stay-at-home in effect until May 15. Instead local governments, he said, would be determinative, but he declined to respond to Trump’s assertion that the President alone has total authority to decide when the country will reopen.

“There is no light switch here, it’s more like a dimmer,” Newsom said. “I know you want the timeline, but we can’t get ahead of ourselves and dream of regretting. Let’s not make the mistake of pulling the plug too early, as much as we want to.”

“I don’t want to make a political decision that puts people’s lives at risk and puts the economy at even more risk by extending the period of time before we can ultimately transition and get people moving again.”

He said the state would use real time data, science and examples on a daily basis as the loosening of orders go forward “to toggle that dimmer, so we get exactly the appropriate lighting, so that we can ultimately transition to herd immunity and that vaccine.”

Newsom told reporters to check back with him in two weeks, when he may be able to outline exact dates if California sees a flattening, and then decline, of coronavirus hospitalization rates, as well as a reduction in the number of people in intensive care unit beds. A third major factor determining the date, he said, would be building a workforce of health care workers who can trace coronavirus infections in order to isolate the infected.

He warned that Californians should prepare to enter a radically different realm where residents continue to wear masks, and where they may be greeted at restaurants by waiters wearing masks and gloves with disposable menus in venues that have half as many tables. Local school officials would develop new protocols, he said, for physical education classes and recess at schools, as well as processes to deeply clean and sanitize schools, parks and playgrounds to keep infection rates down.

Outlining a framework for reopening the economy, the California governor said the dates would be determined by the ability to do six things: expand testing to identify and isolate patients, maintain vigilance to protect seniors and high risk people, be able to meet future surges in hospitals with a “myriad of protective gear,” continue to collaborate with academia on therapies and treatments, redraw regulations to ensure continued physical distancing at private businesses and schools and develop new enforcement mechanisms to allow the state to pull back and reinstate stay-at-home orders.

Newsom said it was an optimistic new phase where the state will move from its surge response, transitioning “into suppression, ultimately on our way to herd immunity, and ultimately to a vaccine.”

Newsom has emphasized the enormous complexity of reopening the state’s economy, which is the fifth largest in the world, at a time when a number of state and regional models show that cases could quickly spike and overwhelm the health care system. For that reason, he began collaborating with Washington Gov. Jay Inslee, a Democrat who dealt with the first coronavirus cases in the country, and Oregon Gov. Kate Brown, another Democrat, early last week to develop joint criteria to reopen their states.

A similar group is in the works on the East Coast. Democratic New York Gov. Andrew Cuomo said his state, New Jersey, Connecticut, Pennsylvania, Delaware, Rhode Island and Massachusetts each plan to name a public health and economic official to a regional working group. The chief of staff of the governor of each state also will be a part of the group, which will begin work immediately to design a reopening plan.

Newsom has acknowledged the stunning economic toll of the virus in a state of 40 million people. Newsom was the first governor to issue a stay-at-home order on March 19, following San Francisco, Berkeley and five surrounding counties, which ordered shelter-in-place three days earlier.

At the same time, New York Gov. Andrew Cuomo, a Democrat, was dismissing calls for a stay-at-home order in his state, which now has the mostcoronavirus cases in the nation.

Between March 12 and April 7, Newsom has estimated that about 2.3 million Californians filed for unemployment benefits putting an enormous strain on the state’s budget, which had a $21.5 billion surplus earlier this year before the virus. Nationally, unemployment claims have surpassed 17 million.

California’s system has been swamped with claims amid reports from applicants of website crashes and hours-long waits for assistance from the state’s Economic Development Department, leading Newsom to extend the department’s hours and dedicate more staff to the handling of claims.

In Los Angeles County alone, nearly half of Angelenos said they had either been laid off or had their hours reduced, according to a survey released Saturday by the Thomas and Dorothy Center for the Study of Los Angeles at Loyola Marymount University.

But California’s physical distancing measures have been a success and hailed by public health officials nationally. At least 724 people had died in California as of Monday, but the state’s peak day in terms of coronavirus fatalities came on April 8, when 66 people died. Numbers have been slightly lower each day since then: 48 coronavirus-related deaths were reported on Monday.

Earlier on Tuesday, Los Angeles County Public Health Director Barbara Ferrer said it may be possible to relax the county’s stay-at-home orders in mid-May, which impact 10 million people. But she said lifting the order, which she extended until May 15 in concert with other local officials, will hinge on the ability to care for those who are sick, to make sure the most vulnerable and those in nursing homes are protected from the virus and to “test, test, test, which has been a challenge,” she said.

One of the models that Ferrer unveiled this week showed that the county could have a 95% infection rate if officials were to lift the order now.

“We do know that the physical distancing requirements are working,” Ferrer told CNN’s Jim Scuitto on “CNN’s Newsroom” Tuesday morning. “We do a fairly aggressive job at isolating and quarantining people who have been exposed and can expose others. … In order for us to safely reopen, we have to understand it’s going to take us some time. Because we cannot reopen, go back to where we were, and then see the huge spike that, of course, will overwhelm anybody’s health care system.”

This story has been updated with additional developments.