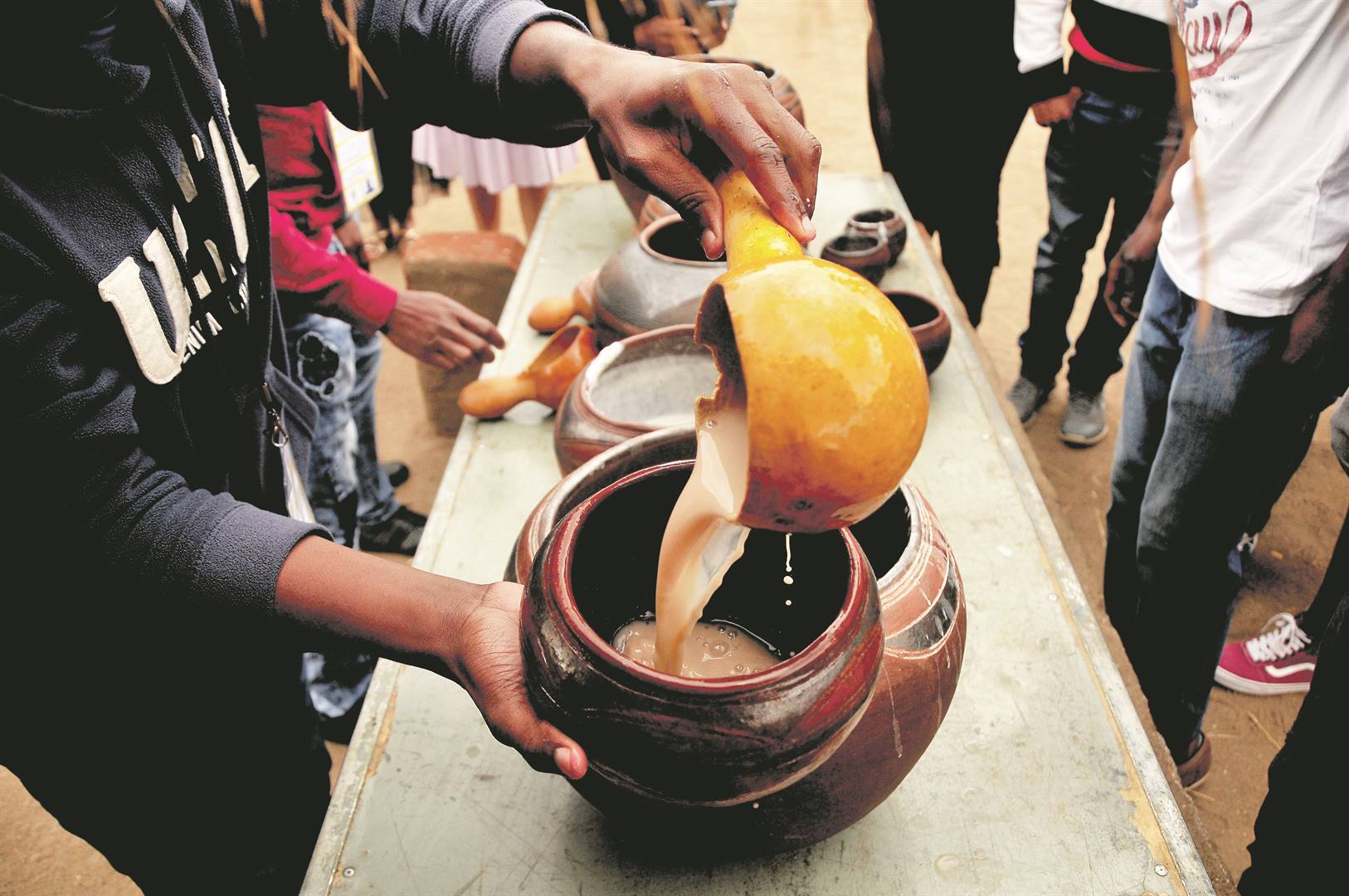 Since President Cyril Ramaphosa banned alcohol sales as part of a coronavirus lockdown, booze-deprived South Africans have turned to homebrew fermenting to get around the prohibition.

“The idea came because there is no alcohol, there is no supply of alcohol anywhere,” said 32-year-old Vilakazi, stuck at home in the leafy Johannesburg suburb of Randburg.

Fermented over at least three days, making umqombothi is inexpensive but time-consuming.

Although traditionally served at special ceremonies, where ancestral spirits are evoked such as funerals and weddings, the brew with a creamy texture and a pungent smell is gaining popularity.

“It’s a very sacred beverage,” said Vilakazi, admitting it’s the first time she has tried to make the beverage, usually the preserve of her eldest sister for family ceremonies.

The pre-mixture of maize and sorghum can also be cooked and served as a breakfast porridge and it is also believed to soothe stomach ulcers.

But the sudden dearth of liquor sales has inspired creativity on how to get tipsy.

A plethora of recipes, tips and hints are being shared on social media by professional chefs and novices alike.

According to data on the Google trends website, there has been a rise in the search on “how to make your own alcohol” – starting especially as the country entered its second week of lockdown. ‘Back to our roots’

“This lockdown is taking us back to our roots, especially for the African youth who aren’t aware of traditional life,” traditional healer Luthando Finca told AFP.

He said the regular use and widening popularity of the brew was reminiscent of pre-colonial African society.

“Umqombothi was enjoyed widely in African communities before Western beverages were brought onto the market,” Finca said.

In a 1999 study, author Anne Mager noted that the notion of “European liquor” in colonial discourse suggested that the liquor of colonial masters was something to aspire to among Africans.

“European liquor” was repeatedly contrasted to indigenous brews of lower alcoholic content, which were pronounced to be uncivilised and primitive.

“It implied that drinkers of sorghum beer, palm wine and other beverages fermented from African grains and fruits would progress to the ‘superior’ beverages of their colonial masters,” wrote Mager.

The coronavirus lockdown regulations have pushed locals to return to ancient methods of making alcohol, “reminding us of our history and heritage”, the traditional healer said.

According to a World Health Organisation 2016 report, South Africa rubs shoulders with the top 10 heaviest consuming nations as the average drinker had 30 litres of pure alcohol.

A regional South African association of tavern and shebeen owners, representing about 20 000 micro and small businesses, has threatened legal action if regulations on alcohol sales and distribution were not relaxed.

They said the lockdown was likely to “ruin” their businesses.

But the government appears far from caving in.

The Minister for Cooperative Governance and Traditional Affairs Nkosazana Dlamini-Zuma has ruled out relaxing the ban.

“We are stressing the prohibition of the transport of liquor. The only alcohol that is allowed to be transported is the one that is used for commercial purposes, for our sanitisers,” Dlamini-Zuma said on Thursday.

Parliament’s health portfolio committee chief Sibongiseni Dhlomo has pleaded with Ramaphosa to not yield to those who want to sell alcohol.