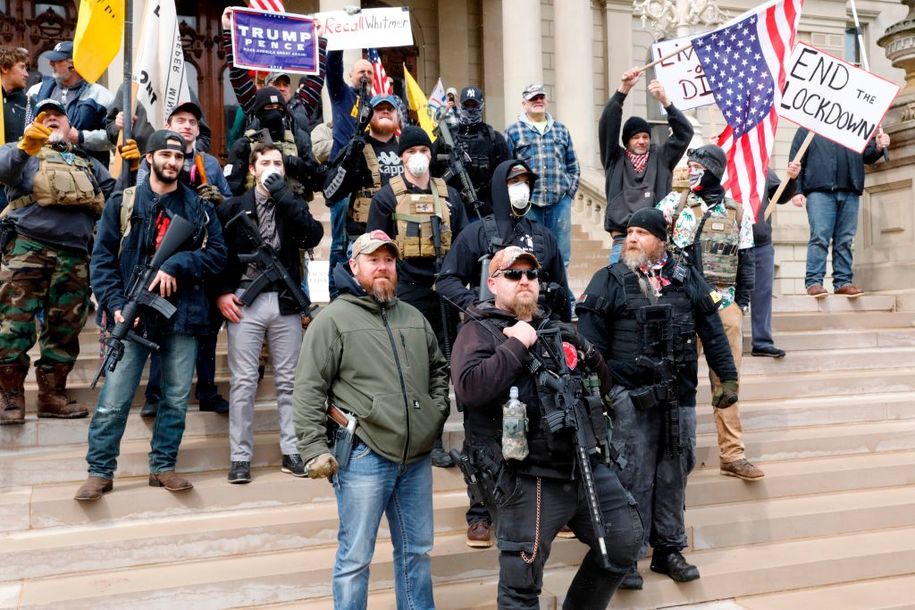 Most of the vehicles were pickup trucks, many of them adorned with signs and flags. Ordinary American flags, yellow “Don’t Tread On Me” Gadsden flags, and deep blue Trump flags dominated the scene. A couple of Confederate flags—including one modified to feature an AR-15 silhouette—were also in the crowd. The Michigan Militia also was present.

The majority of protesters remained in their cars. However, about 150 of them parked and got out to carry protest signs, along with guns, up the steps of the state Capitol building. According to some reports, those protesters generally maintained social distancing rules, but not all of them. At least one group of protesters that gathered on the steps for a video was clustered fairly closely.

“I think every single person here is probably going to get coronavirus, we’re all within six feet of each other,” protester Nick Somber told WILX-FM.

Multiple photos posted on social media showed an ambulance stuck in the middle of the gridlocked traffic around the hospital. Another photo showed a pickup with a large “Michigan Proud Boys” banner blocking the entrance. Yet another photo showed a doctor out in the middle of the stopped traffic, pleading with drivers to clear a path for the ambulance.

The Michigan Nurses Association issued a statement pleading for consideration:

While everyone has a right to gather and express their opinions, today’s protest sends exactly the opposite message that nurses and healthcare professionals are trying to get across: we are begging people, please stay home. The protest was irresponsible, impeding ambulances and traffic to Sparrow Hospital, where frontline healthcare workers are risking their lives taking care of patients suffering from COVID-19. Lives are being saved because of the stay-home order. We ask everyone to protect themselves, their families and us by doing what’s best for the greater good.

The protest’s organizers later claimed that the hospital entrance had not been blocked.

The Michigan Proud Boys also put in an appearance with Republican congressional candidate Mike Detmer of Howell, who posted a selfie of himself with a cluster of protesters, and the large truck with the Michigan Proud Boys sign in the back. One Proud Boy wearing a mask near the rear of the group flashed a white-nationalist “OK” sign. Detmer later claimed he had been photobombed and removed the shot from his Facebook page.

Michigan has been hit particularly hard by the novel coronavirus, with more than 27,000 cases confirmed in the state and at least 1,700 deaths. A Johns Hopkins University tracker indicated that in Wayne County, home to Detroit, 820 people have died—more than any county in the U.S. outside of New York state.

There have been protests elsewhere. On Easter Sunday, “Patriot” movement figure Ammon Bundy organized a protest gathering in Emmett, Idaho. On Monday, about 100 protesters urging Ohio Republican Gov. Mike DeWine to reopen the state gathered outside the statehouse in Columbus. And in Raleigh, North Carolina, more than 100 protesters gathered to demonstrate against Democratic North Carolina Gov. Roy Cooper’s stay-at-home order.

The Michigan Conservative Coalition has a history of dalliances with extremists—epitomized, perhaps, by its Facebook post featuring a cartoon attacking the lockdown orders as a nefarious social control scheme drawn by a noted neo-Nazi artist. Its Facebook page has regularly featured white nationalist “Pepe the Frog” and Islamophobic memes, and the group recently hosted provocateur Michelle Malkin, who herself has become closely aligned with the right’s white nationalist contingent.

It also claimed that “Operation Gridlock” was co-hosted by the Michigan Freedom Fund, an organization overseen by the DeVos family. When Gov. Whitmer pointed out the connection last week, Betsy DeVos responded that she wasn’t affiliated with the event.

“These people may even choose to take it out on the Governor later,” she wrote. “Her numbers in the polls might diminish. She may not even win a second term. But if people all around our state do not have their lives cut short and instead go on to rebuild their future in the aftermath of this terrible time, then Governor Whitmer will have done her job. Even if the people she has saved and the lives she’s touched don’t recognize it or appreciate it. And that’s what leadership looks like.”