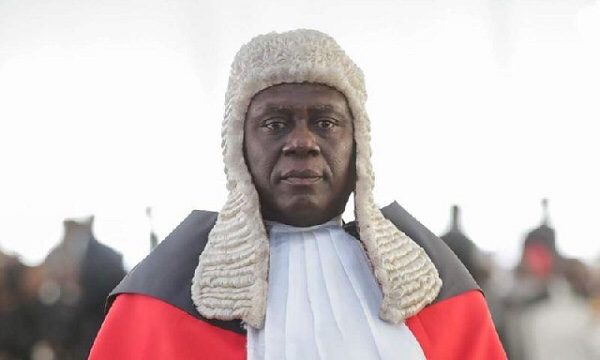 59
SHARES
328
VIEWS
Share on FacebookShare on TwitterShare on WhatsApp

The National President of the Judicial Service Staff Association (JUSAG), Mr Alex Nartey, has vouched for the integrity of the Chief Justice, Justice Kwasi Anin Yeboah.

“We have worked with Justice Anin Yeboah in the courtroom, at the administrative level and at management level, and based on the moral and ethical standards with which he goes about his work, there is no way he will stoop so low to demand or take bribe,” he stated.

Speaking to the Daily Graphic in Accra last Friday, Mr Nartey expressed confidence that the Chief Justice would come out clean from the petition seeking his removal over a $5 million bribery allegation.

A private legal practitioner, Mr Kwasi Afrifa, made the allegation, but the Chief Justice had since denied it and asked the police to probe the matter.

Following the allegation, an anti-corruption civil society organisation, the Alliance for Social Equity and Public Accountability (ASEPA), petitioned the President to invoke provisions of Article 146 to commence impeachment proceedings against Justice Anin Yeboah.

A letter sent to ASEPA from the Office of the President, signed by the Secretary to the President, Nana Bediatuo Asante, said the President had commenced the processes in accordance with Article 146 (6) of the 1992 Constitution.

The letter, dated July 26, 2021 and titled: Re: Petition to invoke Article 146 for the removal of Chief Justice, said: “I write to acknowledge receipt of your updated petition in respect of the above subject matter and to inform you that the President of the Republic has, in accordance with Article 146 (6) of the Constitution, commenced the appropriate processes subsequent to being petitioned for the removal of the Chief Justice.”

The JUSAG President said the petition seeking the removal of the Chief Justice flew in the face of the Constitution.

“If you want the President to remove the Chief Justice, your petition should be right in the eyes of the Constitution. You will find out that many Ghanaians are interested in finding allegations, without finding the substance, a conduct that is a threat to our democracy.

“I don’t know who is advising ASEPA. I expect them, in the exercise of their constitutional right, to do the right thing, so that the very law that they seek to be enforced is not violated,” he said.

Explaining, he said the petition should have been sent to the President and copied to only the Chief Justice.

However, the petitioners went overboard by copying other people, he said.

Stressing that he was scandalised at the impropriety of the petition, the JUSAG head added: “So they [petitioners] are wrong ab initio.”

He cited a Supreme Court ruling in the case: Adjei Twum vs Attorney-General, Supreme Court Writ Number JI/7/2006, to back his assertion on the impropriety in ASEPA addressing their petition to other people, instead of only the President and the Chief Justice.

Mr Nartey pointed out that anybody who wanted to enforce the Constitution should not turn round to violate it.

“The petition to the President, which was copied to other persons, was wrong and in contravention of the dictates of the Constitution,” he said.

CJ not above the law’

The Chief Justice, the JUSAG President admitted, was not immune from questions of alleged misconduct.

However, he said, the dictates of the 1992 Constitution must not be downplayed in a matter like the removal of the Chief Justice.

Within some circles, he said, the allegation against the Chief Justice was being misconstrued to mean that he was on his way out.

“So we want to set the records straight and implore Ghanaians to dismiss the allegation,” he said.

“We have a collective duty as a people to protect the sanctity of the office of the Chief Justice,” he added.