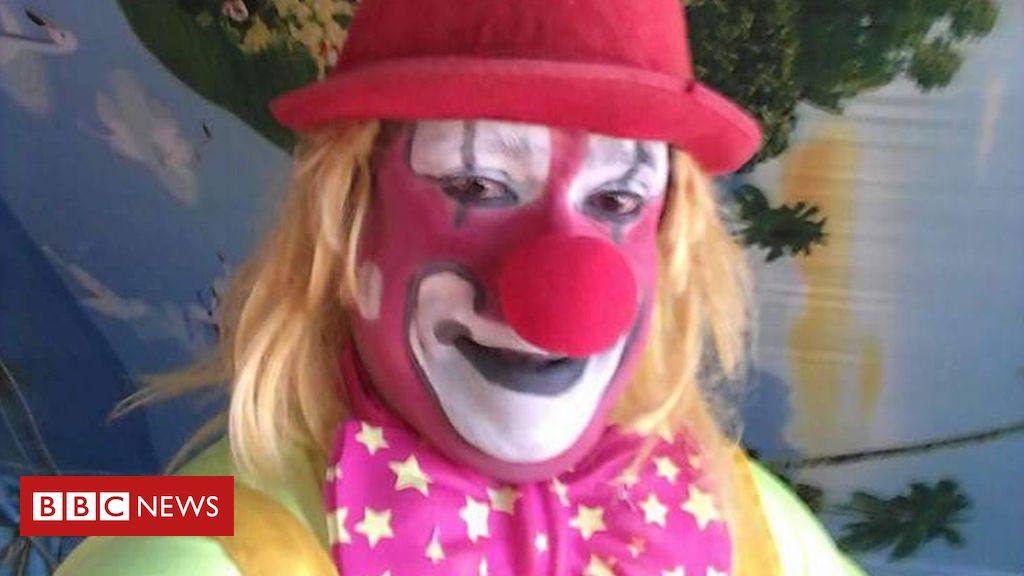 Circuses are already a dying art form in India, and the lockdown imposed to spread the curb of the coronavirus has left them barely hanging on for survival. The BBC’s Chinki Sinha reports.

Biju Pushkaran, 50, is wearing his polka dot overalls, his face painted with white powder, his cheeks reddened with vermilion and lipstick. Ready, he walks into an empty tent in Airoli, a suburb of the western city of Mumbai.

Rambo Circus, which Biju is a part of, has not had a show since 6 March. But that night they were taking part in a live-streamed show in honour of World Circus Day.

“We will come in to your homes and make you laugh,” he announced.

The entire crew performs their routines without an audience to cheer and clap. But while the show goes on, they know the reality is that the curtain may well fall on them for good.

The performers ran out of food and money soon after India went into lockdown on 24 March and had to appeal to the public to help.

In West Bengal state, Chandranath Banerjee, 61, has closed the doors on his Olympic Circus and told all 75 members of his troupe to go home, with the promise that he would call them if they “ever make it out of these dark times”.

“They cried,” he said. “We need people to come and see the shows. With isolation as the new norm, we had to stop.”

But Jayaprakasan PV, 52, the manager of Great Bombay Circus, doesn’t want to give up. Not yet.

In a town called Manargudi in the southern state of Tamil Nadu, his tents stay put.

“We don’t know what will happen after lockdown is lifted. Coronavirus has made us wait in the wings for now,” he said.

Almost two decades ago, India had 23 active circuses, grouped in a national federation, with almost 300 smaller circuses across the country. In 2013, the government banned the use of wild animals and children in performances, which led to many of them going bankrupt.

Now, there are less than 10 registered circuses across India and 25 small ones and 1,500 artists including acrobatic teams from the hilly north-eastern state of Manipur. And it has not been easy. With many of these troupes dependant on cash transactions, a government move to make high value currency notes illegal in 2016, hit them hard.

They have written an appeal to the Prime Minister for help, asking for a loan to help them sustain themselves under a Covid-19 vaccine is developed. They are awaiting a response.

And the situation is not very different around the globe: the world-famous Cirque du Soleil made headlines when it laid off 95% of its staff last month.

Zsuzsanna Mata, the executive director of the World Circus Federation (FMC), said over email that “the pandemic has changed the course of history. Without any income circuses are struggling to assure livelihood for their families, artists and animals.”

The circus as we know it, may be gone forever.

ActionAid Ghana hands over facility for use as coronavirus isolation centre