Coronavirus: Should I worry about my lockdown eating? 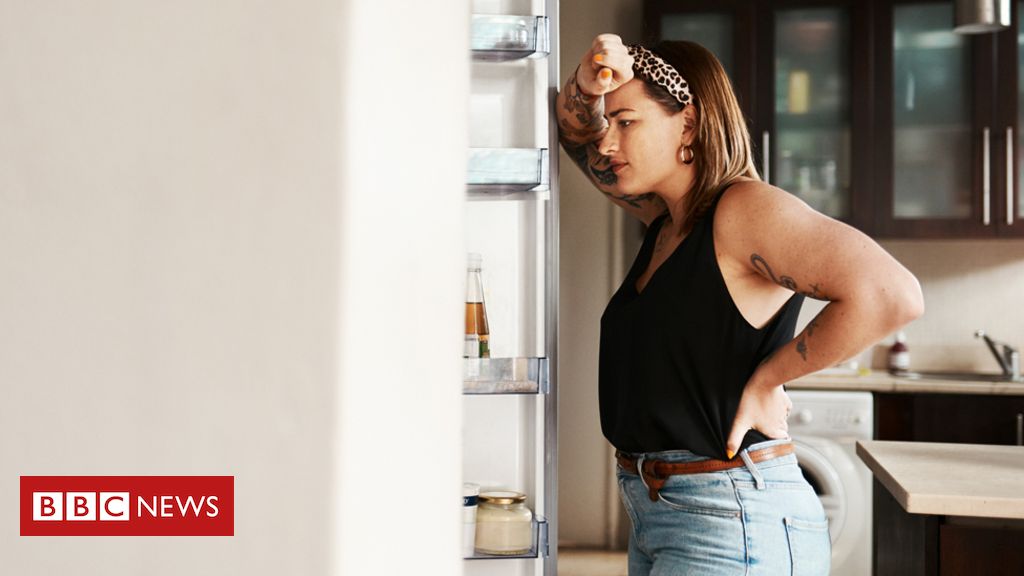 “You eat out of boredom and stress,” says Chloe Taylor-Whitham, 19, from Sheffield, “there’s nothing else to do.”

As the weeks of living in lockdown take their toll, many of us are raiding the fridge for comfort food.

Instead of buying something fresh on the way home from work, Taylor-Whitham has been trying to recreate the things she craves, including McDonald’s cheese bites, in recipes she finds on TikTok.

Lock down reminds me of a Long haul flight, fed up of TV, can’t stop eating out of boredom and just want it to be over so you can get to the good bit

“I’m definitely comfort-eating more chocolate and biscuits – even though I’m a diabetic – just as a bit of a release, to lift the mood,” says Andy Lloyd, 43, from Oldham. His OCD medication makes him put on weight, but that’s not his main concern right now.

“Half of me doesn’t really care how I look at the moment, it’s all about surviving through this terrible period. Then when it’s all over we can get back to working out,” he says.

When the schools closed, supply teacher Amy Hodgson, 24, from Liverpool, found herself with nothing to do. “I was always going to the fridge or the cupboards and seeing what I could eat, because I was bored. I gained 4lb in a week, and I thought, ‘How have I done that?'”

Having lost 5st 3lb (33kg) in the past year, she did not want to put it all back on. She realised she snacked most mid-morning, so that’s when she now exercises.

And she now cooks for the whole family. “It gives you something to look forward to,” she says. “It gets to about 4:30pm and I think, ‘Right, I’ve got to do their tea now.'”

So are we actually eating more?

That is one of the questions researchers at the University of East Anglia are asking. They have just started to track our lifestyle behaviours under lockdown.

“The best I could equate it to is what happens to us during holiday periods, when we kind of throw caution to the wind and think: ‘It’s holiday time,'” says Prof Anne-Marie Minihane, from Norwich Medical School, and the study’s lead on nutrition and eating behaviour.

“Now we think: ‘Oh my God, there’s so much going on in the world, I’m just going to not worry about my behaviour. People use all kinds of excuses for bad behaviour, and certainly Covid-19 is a very good excuse.”

It’s too soon to analyse the study’s findings, but Prof Minihane has anecdotal evidence that suggests people have adopted unhealthy behaviour patterns – overeating the wrong kinds of foods, and drinking more.

She adds that under-eating is as bad for you as over-eating, and that especially among older adults, undernourishment is a huge problem.

There are physiological reasons for some of these behaviours, she says. When the body is stressed it produces too much cortisol, which makes us more likely to over-eat – and not just any kind of foods, but those which are high in fat and sugar.

So what can you do if you’re concerned you’re overeating or snacking too much?

Routine is really important, so try and keep to a routine of having three meals a day, says Clare Thornton-Wood, a registered dietician and spokesperson for the British Dietetic Association.

It’s fine to have a couple of snacks, but you might then need to have slightly smaller meals.

And if snacking is a real concern, you could put your snacks for the day in a box. If you eat them all before lunch, that’s fine, but there’s no more.

And whatever our new eating patterns are, we shouldn’t feel bad about ourselves, she adds.

“Avoid too many negative thoughts, because we are going through a really hard time. Accept that you are going to eat differently and don’t feel too bad about it,” she says.

Tips on how to eat more healthily during lockdown

For others, the issues around food during lockdown are more complicated.

Cara Lisette has anorexia, and the lockdown meant her daytime treatment centre had to close.

Losing that support, as well as the early supermarket rush on canned goods – which deprived her of some of her “safe foods” – meant some of her symptoms re-emerged.

“I thought: ‘Well, I can’t control what’s going on in the world right now but I can control what I’m eating,” she says. Cara decided to speak to her eating disorders team and is now back on track, sitting out the lockdown at home.

Feeling out of control is a huge issue for people with eating disorders, says Bernie Wright, a psychotherapist from Kent who specialises in this field.

“What we’ve got to think about is that we have got a total lack of control outside our front door,” she says. In response, people with eating disorders may create more rules around how they eat. “It’s an illusion of control,” she says.

Wright has seen an increase in referrals since the lockdown, partly because it has become more difficult for people to hide their eating disorders from their families – children can no longer pretend they had a big lunch at school, and people are suddenly discovering their partners over-exercise.

She has also heard from former clients whose symptoms have returned in response to the stress of the pandemic.

Wright says an important message to get across at this time is to have self-compassion.”Be kind to yourself, be compassionate,” she says.

So is lockdown all bad news?

Not at all, says Clare Thornton-Wood. She has been enjoying meals in the company of her children, who are back from university and are helping out in the kitchen.

“One benefit that could come from this lockdown is that families are sitting down to eat together when they wouldn’t have done previously,” she says.

Beat, the eating disorder charity, has published advice for anyone worried about the impact of coronavirus.

Beat also has a new online support group, the Sanctuary, for anyone feeling isolated who would like to talk to people with similar experiences and concerns.

If any of the issues discuss here have affected you, sources of advice and information on eating disorders can also be found on the BBC Actionline.