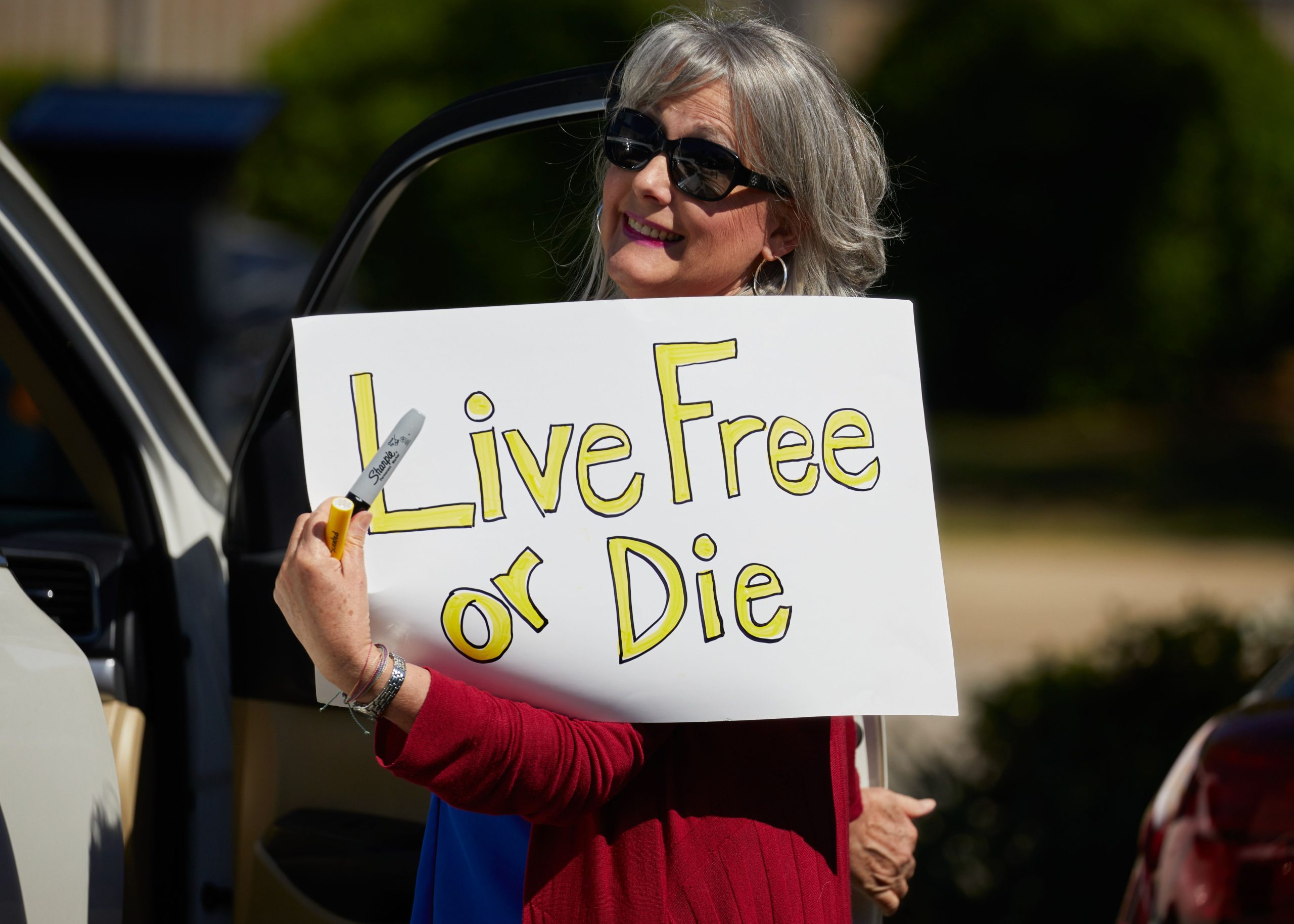 Would you be willing to give up your individual rights for the sake of the common good?

That’s the question that citizens across the world are facing in the midst of the Covid-19 pandemic.

But according to experts spanning law, public health and privacy policy, it may be the wrong question to ask. Instead, they say, we should be weighing the specific kinds of information that health officials need to do their jobs, whether there are less intrusive alternatives, and whether there’s evidence that these approaches will work.

Once those questions are answered, we need to forge ahead in a way that preserves our privacy and civil liberties as much as possible, while ensuring that there are safeguards in place. It’s vital, they say, that powers granted to  governments during times of crisis do not continue once Covid-19 is over.

“The best way to balance public health with civil liberties is with evidence,” said Lawrence Gostin, a professor of global health law at Georgetown Law. Gostin has extensively researched how to strike a balance between the two camps, including during prior health crises like the HIV/AIDS epidemic. Gostin notes that if there are ways to leverage interventions that are voluntarily or less restrictive, they should be considered.

“It all begins with science but it also requires proportionate responses that are not arbitrary or draconian,” he explained. “And we need to maintain the public’s trust.”

Gostin also shared the criteria that he considers with any new public health intervention that could jeopardize an individual’s rights:

The Covid-19 pandemic is barely four months old, but civil liberties groups are already alarmed by how some governments are responding.

At the start of the crisis, Chinese authorities used software to sort citizens into color-coded categories  — red, yellow, green — corresponding to their level of risk for having the virus. Those in the green group had the most freedom of movement. Yellow and red meant that citizens could find themselves barred from entry to eateries and shopping malls.

This is the kind of “big data” that experts like Gostin have not encountered before in prior pandemics, and it presents new challenges as well as opportunities.

A medical worker prepares to check the temperature of an AFP photojournalist before a COVID-19 coronavirus test in Wuhan in China’s central Hubei province on April 16, 2020.

Ronald Bayer, a professor at the Center for the History and Ethics of Public Health at Columbia University, sees potential in using new technology for public health surveillance to get ahead of an infectious disease outbreak. But he also warns that there may be examples of countries using the threat of a disease as a “pretense” to justify authoritarian impulses to amass power, and that technology can be used as a tool in that process. He also notes that measures introduced during emergencies can’t easily be dismantled.

Consider the September 11th terror attacks, which fundamentally changed airline travel for good. Many will recall how it became a lot more challenging to get through security. Heightened fears also led to the Patriot Act, which gave the federal government vast new investigative powers that it claimed were necessary in the fight against terrorism. A terror attack and a pandemic are vastly different, but both present opportunities for governments and the private sector to take on new powers in the the name of keeping citizens safe.

Undermining our individual rights might not even help public health in achieving its goals, some experts have noted.

Tools that are overly intrusive to people’s civil liberties can backfire. During the HIV/AIDS epidemic of the 1980s and 1990s, for instance, Bayer argued in his research papers that public health and privacy rights did not need to be in opposition. Because of the stigma surrounding the disease, he explained, “good public health respects civil liberties, and anything that advances human rights and civil liberties would advance public health.”

One of the big issues at the time was the idea of doctors reporting the names of HIV patients to the states. Some states refused to accept name-based reporting so for years because they feared that it would discourage people from getting tested.

Another controversial topic was the effort around so-called contact tracing, which is being proposed as way to fight Covid-19 today. In many cases, public health officials would notify an HIV patient’s past sexual partners that they may have been in contact with somebody who had the disease, but never identified or named them.

“We learned that if you intrude on privacy you will be counter productive in terms of controlling the epidemic,” Bayer recalled. He stressed that officials made decisions they thought were “necessary” for public health, not just those they thought might feasibly slow the spread of the disease.

One present-day example comes from South Korea, which introduced an electronic system that sends out an automatic alert to people living nearby a known Covid-19 case. Reports found that the information includes age, gender, a log of their whereabouts, and in some cases credit card transactions. Sharing that level of detail could help friends and neighbors pinpoint the specific individual with the virus. As such, many medical experts worry that people with symptoms will choose not to get tested because of the potential for stigma in their community.

For instance, Google and Apple are working to develop a system to do that uses a Bluetooth-based approach, which aims to prevent governments or the companies providing the technology from identifying any one person who might be sick. Users must opt-in to participate. Here’s how the Electronic Frontier Foundation, a privacy-focused organization, describes it:

When two users of the app come near each other, both apps estimate the distance between each other using Bluetooth signal strength. If the apps estimate that they are less than approximately six feet (or two meters) apart for a sufficient period of time, the apps exchange identifiers. Each app logs an encounter with the other’s identifier. The users’ location is not necessary, as the application need only know if the users are sufficiently close together to create a risk of infection.

This kind of approach differs vastly from methods that use GPS to track the movements of citizens without their consent. On a technical level, GPS doesn’t work well in buildings, and it has a hard time understanding whether two people are within 20 feet from each other.

But more important, if consumers don’t trust a smartphone-based tracking system, they can simply leave their phone at home. That would render the technology useless.

“Having consent and good processes to grant and withdraw consent is critical,” said Bennett Cyphers, a staff technologist at EFF by phone.

Other experts, such as the University of Washington School of Law associate professor Ryan Calo, argue that we can go too far in preserving privacy above all other factors.

Calo looks at Google and Apple’s Bluetooth approach and sees other problems. Because it’s voluntary, that might provide people with a false sense of security if they don’t get an alert. Those who have opted out might be walking around with Covid-19 and infecting others without ever being picked up with the system. Moreover, unless public health officials are involved, there’s potential to “game” the system by falsely claiming a person has the virus when they haven’t tested positive for it. That could lead to other harms, like a business intentionally undermining a rival or a political party suppressing participation.

In Calo’s view, contact tracing could be more effective if it wasn’t voluntary, and closely linked with public health reporting.

That’s where the evidence piece comes in. When considering how to intervene, experts will need to look at all effective solutions, then consider the least intrusive measures first. Sometimes that might require citizens to be required to participate.

As Calo notes, in Washington State, public health officials are required to document their attempts to secure quarantine voluntarily well before they forcibly detain someone. In other words, they take the least intrusive approach first, and escalate only if it doesn’t work.

But some questions are even more difficult, and will need to be figured out during this unprecedented global health crisis.

For instance, Calo has pointed out that Washington Gov. Jay Inslee invoked emergency powers to prohibit gatherings of other 250 people. But what if the governor used that measure to stop a rival’s political rally?

“These unique times may yield new precedents, legal and otherwise,” Calo wrote in a blog post. “Few doubt Covid-19 constitutes a crisis worthy of government response,” he continued. “But to paraphrase Justice Robert H. Jackson in another context, emergency powers have a tendency to kindle emergencies.”

SA’s battle of the booze explained

SA's battle of the booze explained