Democratic Rout in Wisconsin Looms as ‘Clarion Call’ for Trump 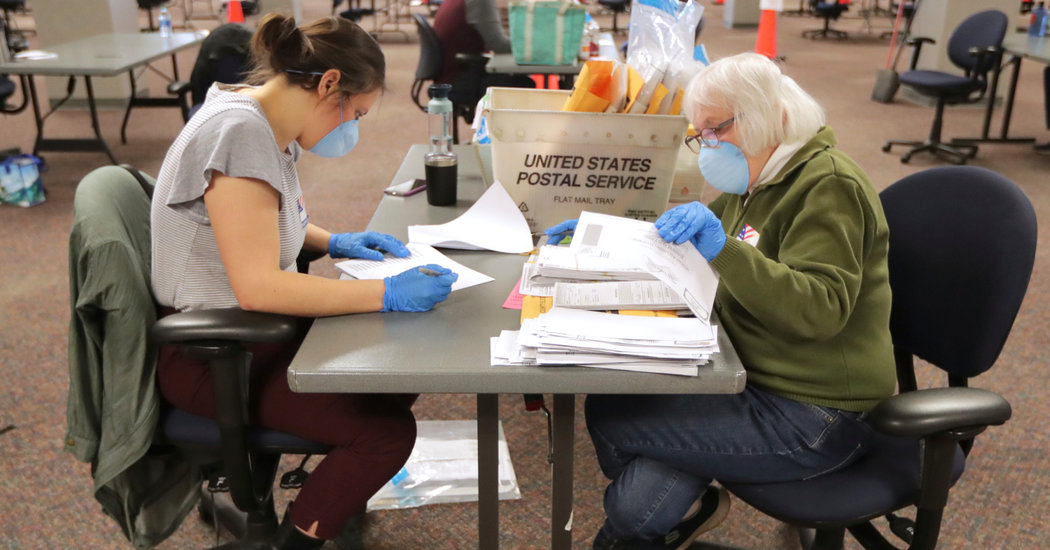 WASHINGTON — The surprise defeat of a conservative justice in a statewide Wisconsin election — despite a show of support from President Trump — drove Republicans and Democrats back to their 2020 electoral playbooks on Tuesday, as both parties examined whether a surge of enthusiasm and on-the-ground organization among Democrats could help them capture that critical battleground state in November.

Leaders of both parties said that the victory, by an overwhelming margin of more than 120,000 votes, could provide a road map for Democrats trying to beat Mr. Trump in November in Wisconsin (which he carried by 22,748 votes in 2016) and other states where he narrowly prevailed. Democrats did have an advantage, though: A presidential primary was on the ballot, which probably raised turnout.

Wisconsin was also the first major test of vote-by-mail efforts for the parties since the outbreak of the coronavirus. Democrats by all accounts had the superior program, forcing Republicans to reckon with what could be a challenge for Mr. Trump’s re-election efforts.

Mr. Trump and some Republicans have attacked vote-by-mail efforts in response to the virus, arguing without evidence that they enables fraud and favors Democrats. But the Wisconsin result was a clear sign for both parties that a strong mail-in strategy could be important in the general election.

“While the dynamics surrounding the election and their impact on the outcome are still being sorted out, the spread and the margin on this race is absolutely concerning for Republicans in Midwestern battleground states,” said Nick Everhart, a Republican strategist in Ohio. “I’d be the first to admit that from afar, I really thought that this was going to be won by the Republican.”

Former Gov. Scott Walker of Wisconsin, a Republican who signed into law the voting restrictions that chafed Democrats, said he was unconcerned about the result, saying that Democrats had been drawn to the polls by their party’s presidential primary between former Vice President Joseph R. Biden Jr. and Senator Bernie Sanders of Vermont. Mr. Sanders ended his presidential campaign the morning after the Wisconsin vote.

“As for November, there are no real takeaways as the turnout will be about twice as large in the fall,” Mr. Walker said by email.

It is risky to draw broad national lessons, particularly about what this might mean for Mr. Trump, from a single state judicial election conducted in the spring, with turnout that was far lower than in a general election. But there were clearly worrisome signs for the president, as well as a few notes of caution for Democrats looking to seize on the result as a glimmer of good news.

Democrats demonstrated that they have a superior vote-by-mail program — built in a week’s time as the pandemic shut down movement in the state — and an enthusiastic voter base willing to brave challenging conditions to get to the polls. They also displayed an ability to mobilize voters and organize mail-in ballots in heavily Democratic areas like Milwaukee and Madison, despite the obstacles of the virus and closed polling places.

The primary between Mr. Biden and Mr. Sanders did help fuel turnout, but that race was effectively resolved well before this vote, with Mr. Biden for weeks viewed as the presumptive Democratic nominee. A senior Sanders aide said the senator had remained in the race through the Wisconsin primary in part to lift turnout for Jill Karofsky, the liberal judge who ousted an incumbent conservative State Supreme Court justice, Daniel Kelly.

Still, Mr. Trump drew far more votes in 2016 than Justice Kelly did, and there is little reason, at least as of now, to think that the president’s ability to inspire his core supporters has diminished. Mr. Biden still faces the task of reuniting Democrats and rallying Mr. Sanders’s supporters — some of whom backed Mr. Trump against Hillary Clinton, the 2016 Democratic nominee — behind him. And Republicans have months to learn lessons from what Democrats did, and they have the money and political expertise to put in place any new tactics or strategies.

Just days before the April 7 election in Wisconsin, Republicans there blocked efforts by Gov. Tony Evers, a Democrat, to delay the election because of the coronavirus and provide mail ballots to all voters. Democrats now argue that the Republican strategy might have backfired, citing the long lines of voters risking their health to cast ballots as evidence that Democrats were pushing back against efforts to suppress their vote.

“When you have the coronavirus out there and you make the decision anyway to go out and vote, that says a lot,” said Patty Schachtner, a state senator whose victory in a January 2018 special election flipped a seat that had been held by Republicans for 17 years and presaged sweeping Democratic triumphs later that year. “If you took the time to put on a mask and go vote, then it meant a lot to you.”

Ms. Schachtner did a six-hour shift as a poll worker last week, and said the persistence of Democrats waiting in line, often for hours, signaled an electorate that was highly motivated.

It is also possible that Wisconsin Republicans were too casual in their efforts, confident that Mr. Trump’s advocacy for their candidate — he tweeted several times on Mr. Kelly’s behalf — and the spring turnout, which was 52 percent of the 2016 presidential electorate — made it highly unlikely that an incumbent would be removed. Mr. Kelly is just the second incumbent Wisconsin Supreme Court justice to lose since 1967.

Though Ms. Karofsky’s victory caught members of both parties by surprise, it was not a fluke. Perhaps the best comparison point to the race is a similar State Supreme Court election in April 2019, which Justice Brian Hagedorn, a conservative, won by 6,000 votes.

Ms. Karofsky improved on the performance by the liberal candidate in that race in 71 of Wisconsin’s 72 counties. She flipped three counties near Green Bay, a key swing area of the state, and cut into conservative margins of victory by at least 13 percentage points in each of the three suburban Milwaukee counties that represent the state’s Republican heartland.

There is little history in the state of voting by mail, leaving Democrats to improvise as the virus transformed the election, while contending with onerous restrictions put in place by the Republicans in power. Early results suggest Democrats have been effective in having party volunteers help voters navigate a complicated process to request and return mail ballots, an online system that required uploading a copy of their photo identification. The sessions were often conducted through one-on-one video calls.

In Washington, Democrats who had been bracing for a defeat they’d already blamed on voter suppression quickly turned to attribute the victory to a yearslong pattern of Mr. Trump repelling suburban and highly educated voters.

“I’d be peeing my pants right now if I was the Trump campaign,” said David Bergstein, a Democratic National Committee official who helps oversee the party’s battleground states program. “Suburban voters do not like Trump and they’re taking it out on the Republican Party.”

Michael Steele, a former chairman of the Republican National Committee, called the result a “clarion call” to the Republican Party and the White House.

“Wisconsin sends a message: This will not be the election you think it will be,” Mr. Steele said. “The danger is greater for Republicans because of what they tried to do with the Wisconsin campaign — to force the vote. To put an arm of protection around their candidate for Supreme Court — and then to have that wiped out handily by the Democrats.”

“Wisconsin is now in play in a big way,” he said.

Like Mr. Walker, Wisconsin Republicans attributed the defeat to the presidential primary raising Democratic turnout. But they also said battles over whether to conduct the election amid the pandemic wound up keeping away more of their own voters, who tend to be older and more concentrated in rural areas where polling places are farther away.

The very regulations that Mr. Walker and fellow Republicans put in place to restrict voting by mail — requirements that voters upload a copy of their photo identification to request a ballot and obtain a witness signature before returning their ballots — may have had the effect of keeping away Republicans used to voting in person who were unfamiliar with new processes.

“While Republicans encouraged early and absentee voting, many elderly either did not have the wherewithal to request absentee ballots or the inclination to vote in person on April 7,” said Doug Rogalla, the Republican Party chairman in Monroe County. “They were confused, afraid and decided to stay home.”

Ms. Karofsky’s victory also showed the fruits of three years of Democratic organizing in Wisconsin, including in areas outside major cities that had been neglected during the Obama era.

Jim Kurz, the Democratic Party chairman in Rusk County in the state’s rural, wooded northwest, said the state party had dispatched a paid organizer to help with get-out-the-vote efforts in the heavily Republican area.