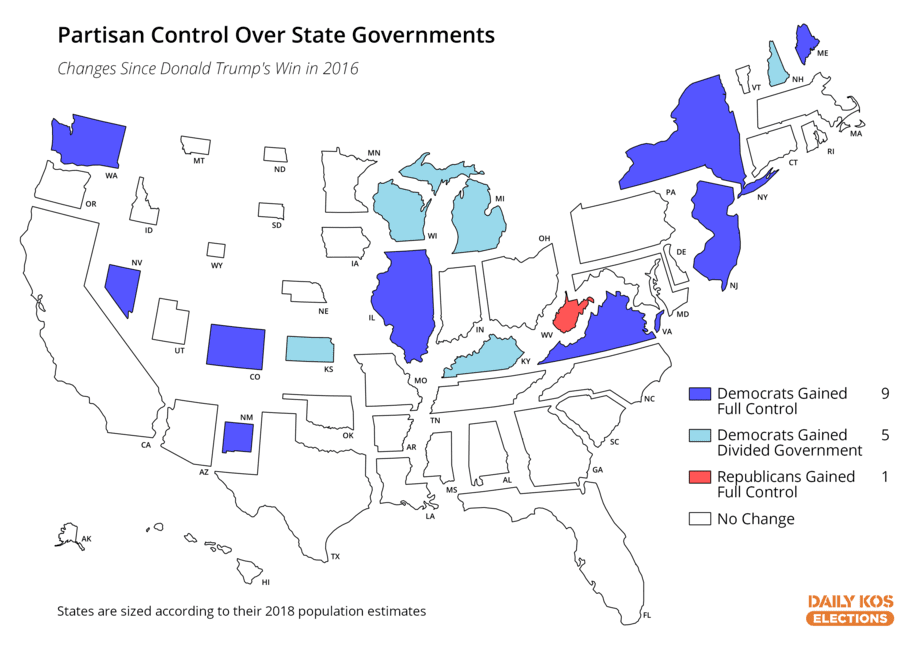 In some cases, Democrats have brought about these changes by flipping governorships at the ballot box, while in others, they’ve done so by electing new state legislators. The only movement in the other direction, by contrast, came when West Virginia’s governor switched parties—not because voters had the chance to express their will.

In all, these 14 states represent 29% of the country’s population, and they’ve all helped usher in a new era of progressive governance. In Virginia, for instance, the newly Democratic legislature has passed a raft of bills to protect voting rights, while Kentucky’s Democratic governor has expanded access to Medicaid.

This dramatic shift underscores the importance of state governments, and with the 2020 census now underway, that’s going to skyrocket. Whoever’s in charge of the states will get to draw new election districts starting next year, both for Congress and state legislatures. That in turn will help decide what kind of representation voters get to enjoy for the next decade.

And this November, it won’t just be Trump’s shadow looming over the elections—it will be Trump himself. With any luck, though, he’ll continue driving state governments away from his own party and into the waiting arms of Democrats.

Coronavirus lockdown: The routes back to normal life